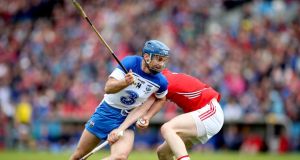 Waterford, as the county freely accept, hasn’t so gilded a history that they will take lightly any silverware let alone national titles but even by those aspirational standards, this year’s Allianz Hurling League is a memorable and singular achievement.

Manager Derek McGrath, for whom the success is spectacular endorsement of his selection and tactical decisions, acknowledged that they would be celebrating their win without taking their collective eye off the championship re-engagement with Cork in five weeks.

Put in perspective, this is just Waterford’s third league win and the first since 2007 and not since Offaly in 1991 has a county won the title coming from outside the top division. They now go into the summer as the only unbeaten county in the Liam MacCarthy Cup.

The story for Cork is starkly different. After a high-scoring campaign and a memorable resurrection in the semi-final against Dublin, they have five weeks to diagnose what went wrong and how they emerged such a distant second-best.

Corner back Noel Connors had a phenomenal match, getting in a surgical flick to stymie Bill Cooper in the first half and man-marking Cork’s leading scorer Patrick Horgan so efficiently the Glen Rovers man didn’t score from play.

As ever this season the most eye-catching contributions came in the half backs where Tadhg de Búrca and Austin Gleeson were everywhere, intercepting and covering. Gleeson added a couple of high-tech points – from a sideline at least 65 metres out and a close-control solo down his right wing, he somehow managing not to be driven into touch, which was finished with a point.

Beside them Philip Mahony also maintained his solid form, putting in a bravura block on Horgan near half-time.

It wasn’t that Cork were starved either, as Daniel Kearney got onto a lot of ball at centrefield and Anthony Nash’s puck-outs weren’t under pressure given the under-populated opposing attack.

Gleeson’s second point made it 0-9 to 0-5 but Waterford, having streaked out to a 0-3 to nil lead within four minutes, were only maintaining the differential rather than kicking on. Given Cork’s proven propensity to lie on the ropes before launching their own barrage, this wasn’t an altogether comfortable position for the underdogs despite – or maybe because of – their clear superiority.

In the 20th minute, for instance, Séamus Harnedy managed to open a path to goal for himself. His shot was aimed at the far, right corner of Stephen O’Keeffe’s goal but the goalkeeper dived to block and the incoming Paudie O’Sullivan – an early replacement for the injured Alan Cadogan – was unable to get hold of the rebound.

In the circumstances Waterford must have been happy to get to the break four ahead, 0-11 to 0-7, because even if their superiority deserved a bigger lead, the margin could equally have been smaller, as Pauric Mahony pointed two frees in the minutes before the interval.

One of the issues for Cork was the unforced aimlessness of some of the clearances, which turned over far too much possession. Jimmy Barry-Murphy’s surprise choice at full back, Aidan Ryan, had a scary start on Maurice Shanahan but came into the match in the second quarter before getting into further difficulties in the second half and being replaced by Damien Cahalane.

For a defensive team, Waterford posed plenty of threat up front. Jamie Barron’s energy at centrefield and the leadership provided by his partner Kevin Moran and the other senior member Michael Walsh, at wing forward, was the engine that drove the attacks but Colin Dunford’s pace in possession and Mahony’s accuracy exerted huge pressure on Cork.

Shanahan also came into the game, drifting out for ball and drawing frees as well as getting a couple of chances he might have done better with as well as one he pointed. Having defused Cork’s attempted comeback they pushed on and brought the margin to six.

Cork struggled to get back. Cooper had a 47th-minute shot waved wide when television pictures suggested it was a point. Lehane was eventually brought out to the wing to get on more ball and he crashed a shot of the crossbar in 59th minute but managed to get a point off the rebound.

The coup de grace came in the 65th minute. Walsh fetched Gleeson’s line ball and passed to replacement Tom Devine, whose shot at goal went in off Nash’s hurl for a nine-point lead, 1-20 to 0-14.

The rest of the match was purely formality, as a rapid succession of exchanged points left Waterford winners by 10.

In five weeks at the same venue the counties will meet again. Regardless of the outcome – and yesterday has radically altered likely perceptions – the first national trophy of the year is in Waterford, a major success for a young team on the move.