Resurgent Wexford in Wexford Park a dangerous assignment for Dublin 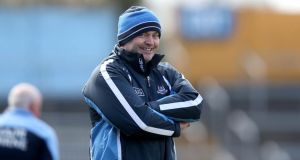 Dublin boss Anthony Daly: Last year Dublin went from averaging 0-4 from play out of their starting forwards to averaging 1-11. Now Daly needs them to pick up where they left off. Photo: Donall Farmer/Inpho

And (a not unrelated) two, that for all that Conal Keaney’s gifts would allow him to live long and prosper in any line of the pitch, he was wasted at centre-back. With Liam Rushe moving to the wing accommodate him, it was like robbing Peter and punching Paul in the face.

Anthony Daly moved Keaney back up to the forwards by the end of that evening, accepting that it was a wheeze that hadn’t paid off. In the replay the following Saturday night, everything good that Dublin did flowed through Keaney at wing-forward and though Paul Ryan’s frees were mostly what kept them out of Wexford’s reach, the Dublin starting forwards chipped in with 1-5 from play.

Though it may not sound like a total worth putting the neon sign people on notice for, it was a giant leap considering what had gone before. In Wexford Park, it only had got up as far as 0-4. In their two defeats in 2012, it was 0-2 against Clare and 0-3 against Kilkenny. No team with notions could ever live with such a paltry return. Daly was under no illusions.

“Dotsy [O’Callaghan] had a couple of wides when you’d put your shirt on him scoring. Look, it was just one of those nights.”

He couldn’t afford another one. The cold truth of that drawn game was that although Dublin were the better team, Wexford were by a distance the more dangerous one. Daly couldn’t let it happen again. He wasn’t going to reinvent the wheel but he was certainly going to beef it up.

“Anthony would never have been like Davy Fitz, with loads of intricate plans and stuff like that,” says Shane Ryan.

“Daly’s philosophy is very simple. It’s hurling – get the ball in to the scorers as quick as possible. The coaching was geared around all the different ways of doing that.

“You had to do it fast and you had to pick out your man. The point was that there are men who can score at will, the likes of Dotsy O’Callaghan, who will be lethal if he gets good ball in. The quality of the ball is the starting point.”

By the time of the replay against Kilkenny, they were finding their way. O’Callaghan was humming in every game – four points against Kilkenny, four against Galway in the Leinster final, with Keaney, Ryan and Danny Sutcliffe all chipping in. They went from averaging 0-4 from play out of their starting forwards to 1-11.

Now Daly needs them to pick up where they left off.

“The thing with having Keaney and O’Dwyer up the middle is that they are such strong hurlers,” says Shane Ryan. “They will be interchangeable as the game goes on. O’Dwyer is a great man to take on the defence and when he is running down the middle, Dotsy and McCrabbe can peel off and find space. Same with Keaney when he moves out. That strength and ball-winning ability is a huge plus.”

When Dublin were ordinary, they lived off frees. If they’re to stay Leinster champions, they can’t go back.