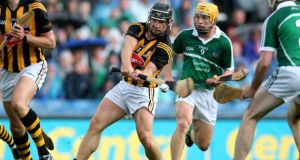 They may have missed the big day in 2013, but Kilkenny showed their championship credentials haven’t diminished.

The Cats roared back into the All-Ireland final, but were pushed all the way as a snarling Limerick pressed and pressed for their place in the September showdown.

In the end, a goal in either half – the first from Richie Hogan, the latter from sub Richie Power – saw Brian Cody’s side edge through in a rain-sodden Croke Park.

Limerick came into the game full of fire and showed no fear as they took the game to Kilkenny. The sides had to battle against each other and the weather as torrential downpours battered Croker. But there was little in it after the first quarter. Declan Hannon, Donal O’Grady and David Breen were among the scorers as the Treaty men held a slender lead (0-4 to 0-3) against a Kilkenny side inspired by Colin Fennelly (0-2).

The close game continued until near half-time, when the Cats struck. Trailing by a point (0-10 to 0-9), they pushed their way into the lead when Richie Hogan gathered a Colin Fennelly hand-pass, shipped a heavy challenge and drilled the sliotar into the bottom left corner.

That goal cushion remained until well into the third quarter, when another charge drew Limerick back into the game. Five points in a row – Hannon (2), Dowling (2) and sub Seán Tobin were the scorers – saw them charge into the lead with 16 minutes to play.

Then disaster struck as Richie Hogan floated in a free from the left. Eoin Larkin and Richie Power both jumped for it, Power getting the slight touch to flick the ball beyond Nicky Quaid.

That broke Limerick hearts. Try as they might, they couldn’t find a way back. Two late TJ Reid frees ensured Kilkenny a place in the September decider, with Tipp or Cork to provide the opposition.