Cork are that bit slicker in game of tight margins 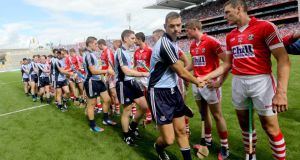 That was as good and as exciting a game I’ve ever seen in this the best hurling championship of my lifetime. Didn’t think I’d say that about a Cork Dublin All-Ireland semi-final when watching both counties during the league.

I tentatively went for Cork beforehand but, really, I didn’t know who was going to win. It’s been so difficult to call matches with any authority this summer. How this brilliant contest developed merely reinforced that.

At half-time I still had no clue as to how it was going to turn out. I just knew I was enjoying myself. It took two acts, one being the decision by referee James Owens to send off Ryan O’Dwyer and the other a terribly unfortunate goalkeeping error, to finally separate the teams.

What did keep sticking into my mind was a belief I have always held about hurling; that touch is everything. And throughout, Cork were that little bit slicker, the ball sticking to them better.

That was unfortunately encapsulated in Patrick Horgan’s goal. Ultimately Gary Maguire’s touch saw Cork pull away. It was also evident by the last contribution the otherwise outstanding Danny Sutcliffe has made during this season’s hurling championship. The young wing forward has been a revelation all summer long, reaching what seems like full potential despite being just 21.

He scored three magnificent points yesterday, performing as well as he probably ever has, so it is wrong to single him out but we all saw what happened at the end. That ball he let roll over the sideline, for me, summed up the difference in hurling slickness between Cork and Dublin. But maybe his mind was gone because the game certainly was.

Like I said, it was not just Maguire and Sutcliffe. There were times in the first half when Dublin controlled the ball with their hurley when they could have caught it. Little things. Miniscule stuff really, but Cork had a little bit more to them and in a game of such incredibly tight margins.

But I am convinced the sending off of Ryan O’Dwyer had the biggest bearing of all on the outcome. I had a clear view of the first yellow card and it was the wrong decision by Owens. Absolutely certain.

It was shoulder to shoulder on Luke O’Farrell. It was never a yellow card but we are seeing this way too much in 2013. I have an enormous amount of sympathy for O’Dwyer. Here’s a player who produces some of the most physically admirable traits in a sport that is supposed to reward physicality and superior conditioning.

The referees, as a body, stated they wanted to see more yellow cards this year. The price for that is now being paid by Dublin and Kilkenny. And it is an exacting toll.

The early borderline challenges are getting yellow cards, with the aim being to stamp out any shenanigans, but all that’s being achieved is a naturally physical player who gets a caution, that he doesn’t deserve, is walking a tightrope that O’Dwyer eventually fell from 46 minutes later.

I do have sympathy for the referee as well. He is simply following instructions. The directions that came down earlier in the year are wrong. Maybe we don’t need cards. It puts too much expectation on the official. Why not book him and put him off if he deserves it. There was a bit more discretion that way.

Now, people can say, in that situation Daly should have taken off O’Dwyer but he was having a mighty game. You want in him in there doing exactly what we saw.

And then one mis-timed challenge – it was a foul and he did deserve to be yellow carded – but it didn’t merit reducing Dublin to 14 men.

Instead of talking about one of the great All-Ireland semi-finals we are examining a decision that irrevocably changed the game.

Because at that time Dublin were in control and in the best position to win an All-Ireland since 1961. I know they were only leading by a point but it felt like there was plenty more in them and their belief in their system looked enough to get them over the line.

But what a game. So many sensational scores and young Conor Lehane also came to life in a major encounter. There was also unbelievable defensive displays from Liam Rushe, who was lucky not to be sent off, but then he won the next throw-in. Savage stuff. Conor O’Sullivan was also superb for Cork.

Jimmy Barry-Murphy will like that he can point to the fact Cork are yet to win a big match when the opposition have 15. He can use that to drag more effort out of his men. They were unable to put Dublin away until the Maguire mistake/Horgan goal.

They say there are no second acts in hurling management. But JBM gives hope to us all!