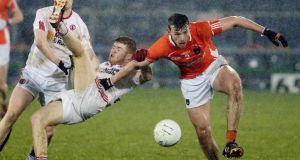 Tyrone booked their place in next week’s Ulster U21 final against Donegal with a victory that was easier than the scoreline suggested.

First-half strikes helped the Red Hands coast into a 2-6 to 0-1 half-time lead and despite some excellent free-taking from Armagh senior player Ethan Rafferty and an injury-time goal from Jack Grugan, they were comfortable winners.

Last night’s semi-final was switched from Brewster Park to Kingspan Breffni Park due to an unplayable pitch in Enniskillen, but conditions were just as bad in Cavan.

Tyrone adapted better to the wet, greasy surface and scored the first three points, all from play, from Ruairi McGlone, Kieran McGeary and Daniel McNulty in the opening 13 minutes.

All their good work was undone when Aidan Nugent collected a high ball into the square and swivelled brilliantly to shoot into the far corner of the net one minute later.

Tyrone responded well to the setback, with Lee Brennan replying instantly with 1-1.

He followed up a left-footed free with a well-taken goal, pulling on a loose ball on the ground and drilling it low into the corner beyond the Armagh goalkeeper.

Tyrone continued to assert their dominance when Omagh’s Conor Meyler pulled off a cheeky lob over Blaine Hughes for goal number two.

Armagh only registered one point in the first half, a free from Ethan Rafferty in the 26th minute, leaving the orchard county trailing by 2-6 to 1-1 at the break.

Armagh’s best spell came in the third quarter when they reeled off three points in a row, two frees from Rafferty and a superb point by Ryan McShane.

Tyrone goalkeeper Sean Fox, who came on as a first-half sub for the seniors in the defeat to Donegal on Sunday, pulled off a superb flying save to his left from Ryan McShane’s fierce shot after 52 minutes. Jack Grugan pulled back an injury-time goal for Armagh.