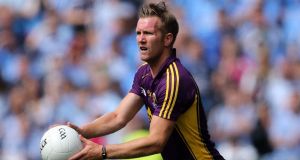 Wexford’s PJ Banville has joined the New York senior football panel and will be among a number of players with intercounty experience available to manager Ian Galvin for this year’s Connacht championship opener.

Banville who is 29-years-old has been training with the 35 man New York squad which last December began preparations for the visit of Galway in the preliminary round of the Connacht senior football championship on May 3rd.

Last January the Wexford attacker confirmed that he would be travelling for the upcoming year and would be unavailable for a Wexford team who are now struggling to avoid relegation from Division Three of the Allianz football league.

Banville was selected at centre forward in all three of Wexford’s championship games last summer and had scored seven points in those games before opting to travel to New York for the remainder of the summer where he won a senior championship with the Kerry team.

He returned then for the latter stages of the Wexford club championship to play with his local Horsewood club, but he has since returned and joined up with the Donegal club in America.

The New York panel have been struggling of late with snowy conditions preventing them from partaking in outdoor sessions, yet they’ve been boosted by the addition of Banville and with him Armagh’s Robbie Tasker and Derry’s Niall McFeely.

The departure of last year’s captain Brendan Quigley, has been eased further with the continued commitment of Offaly’s Brian O’Connor and Down’s Keith Quinn. Although Galway’s Nicky Joyce who remains in the city has again opted not to join up with the squad.

A major player turnover since last year’s Connacht championship 4-18 to 0-8 defeat against Mayo, means that 25 of the current 35-man panel are new additions.