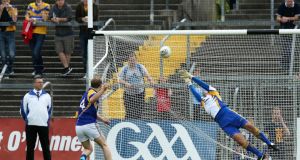 Longford’s Brian Kavanagh scores the first goal of the game with a penalty. Photograph: Ryan Byrne/Inpho

Jack Sheedy’s Longford negotiated a difficult clash against Clare at Cusack Park, Ennis, on Saturday and came away with a three-point win over the host, in Round 2A of thequalifiers. Digging deep, the Leinster side overhauled a one-point deficit at the break to come up trumps.

“We are thrilled,” Sheedy said, minutes after the final whistle. “The lads dug very deep – had to dig very deep. You couldn’t ask any more of them. I thought we were going to get hurt by some of the ball that we were giving away but they worked very hard to get it back when they did.

Clare team captain Gary Brennan got the game’s opening score, a pointed free from a distance, after one minute of play. Longford’s talisman Brian Kavanagh replied with a similar score moments later. The Banner county enjoyed an amount of possession throughout the half but poor shooting up front let them down.

Corner forward Liam Connerton was hauled down by Clare’s Ciarán Russell and referee Anthony Nolan had no hesitation in awarding the penalty.

This score left the visitors 1-1 to 0-2 ahead early on. Clare’s goal was in the 26th minute and was scored by defender Dean Ryan after some good work by Jamie Malone and corner-forward Eoin Cleary.

Ryan put his side 1-5 to 1-4 in front and they held this advantage until the interval. But a resolute Longford put in a workman-like performance in the second period to advance to the next round.

Rory Connor found Reynolds on the left hand side of the park and his shot deceived Joe Hayes in the Clare goal. Clare never lead after that and two closing points by Kavanagh completed the victory.

Longford are now facing into their fifth game of the championship.

Clare manager Colm Collins gave his thought on his team’s loss. “Obviously it was very disappointing. We didn’t perform. We just seemed to be flat. They were very hungry. They attacked everything. Their tackling was very crisp. We didn’t match that.

“We had a few wides. We had goal chances we didn’t take. But overall I don’t think we can have too many complaints. We didn’t take our chances and that’s that.”