Loughmore-Castleiney and Cahir have it all to do again, with replay set for St Stephen's Day 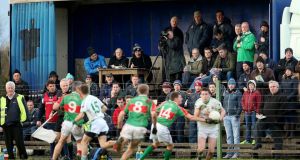 Members of the press and supporters watch the Tipperary Senior Football Championship final between Cahir and Loughmore Castleiney in Cashel. Photograph: Donall Farmer/Inpho

There’ll be no second helpings of turkey or ham for the senior footballers of Loughmore-Castleiney and Cahir this week after they played out a thrilling draw in the Tipperary final in Cashel on Sunday.

Cahir thought for a few minutes that a late, long-range Benny Hickey free had given them just the second title in the club’s history but Cian Hennessy had other ideas. Taking a short Noel McGrath pass in the 59th minute, he weaved his way through to a shooting position and struck an equaliser which meant the sides have to meet again. Although announced after the game that the replay would be next Sunday in Cashel, the two clubs later decided to hold the match on St Stephen's Day, with a throw-in of 1.0pm.

It was probably a fair outcome to a game which edged back and forth over the course of a tension-laden afternoon, where the pitch and conditions couldn’t have been better at this time of year.

However, a couple of quickfire goals from Loughmore-Castleiney put the reigning champions into a strong position. Liam McGrath got the first of those, driving an unstoppable shot to the roof of the net to finish a sweeping move involving Hennessy, Noel McGrath and John McGrath.

The second green flag was raised by Hennessy when he reacted quickest to an excellent save by Brian Enright and sent the rebound to the net.

The lead changed sides a number of times in the second half, before an official attendance of 1,550, before Hickey got Cahir’s last score in the 54th minute to put them ahead, only for it to be cancelled out by Hennessy’s effort in the second last minute of normal time.