Jim Gavin: ‘Winning the league three times is a reflection of level of consistency’ 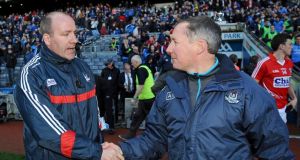 Afterwards, you could have run a decent sweep on which was longer – the length of time Cork could legitimately claim to have had a chance or Stephen Cluxton’s victory speech.

The latter stopped the clock just beyond the minute and a half mark; it would take a fair bit of Cork neck to argue that the former had any more substance to it than that.

For Dublin, this was a three-in-a-row of National League titles. Captured with the sort of ease that would make you wonder why it took so long to achieve, it’s still something for them to savour all the same.

The year will be declared a success or otherwise by bigger days than this but they weren’t turning their nose up at it either.

“For the players, in time, when they look back on their playing careers with the county, doesn’t matter if it’s in a row, winning the league three times is a reflection of their level of consistency in a certain part of the year,” said Dublin manager Jim Gavin.

“It’s a blue riband event, that’s what we’re hunting for. Despite winning that trophy today, there’s no guarantees for the summer.

“We’ll put our heads down again and regroup in two weeks’ time and try to focus on the challenges that the Leinster campaign will give us.”

“Yeah, Ken O’Halloran is a very good goalkeeper and he still managed in the first half to find his men despite the strategies we tried. They got a lot of ball and played their hand-passing game out of defence, which they’re very good at. There were just a number of strategies we tried - some of them worked and some of them didn’t. It’s part of that process. If Cork got a run on us, they would cause us trouble - as we saw with the two goals they got.”

Brian Cuthbert isn’t an argumentative sort but it would be fair to say he and Gavin saw that aspect of the game quite differently. Far from being very good at playing their hand-passing game out of defence, Cork time and again ran into huge difficulties trying to find an escape route.

As for where Cork go from here, Cuthbert has to find a way for this not to take the psychological toll that last year’s league semi-final defeat to Dublin did.

“It’s going to be difficult. At the same time the six or seven weeks [until championship] does give us an opportunity to have a root-and-branch examination of where we’re at as a group and why we performed as we did today. We’ve had eight other league games where we performed really well but today we looked way off the pace, we’re going to have to find out why.”