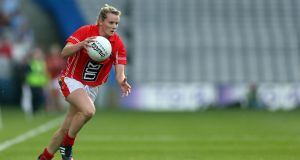 Apart from a blip in 2010 when they lost to Tyrone in the quarter-finals, Cork have been nothing less than invincible in Gaelic football for just over a decade, the county seeking its 10th All-Ireland football title and second five-in-a-row in 11 years when they meet Dublin at Croke Park.

While manager Eamonn Ryan, described by his opposite number Gregory McGonigle as the “Alex Ferguson of ladies football”, has seen plenty of changes in his panel in recent times, he retains a core of experience like no other, with six of his players – Rena Buckley, Briege Corkery, Deirdre O’Reilly, Valerie Mulcahy, Bríd Stack and Geraldine O’Flynn – chasing their 10th winners medal.

Should Cork prevail, two of that group, dual stars Buckley and Corkery, will go in the history books as the most decorated players in Gaelic games, the pair drawing level with Kathleen Mills earlier this month when they won their sixth Camogie medal. And they and their county are seeking their sixth football/camogie double in 11 years.

That, then, is what Dublin are up against. And throw in to the mix the bitter memory of last year, when McGonigle’s side led by 10 points with just 15 minutes to go, only for Cork to produce the most extraordinary comeback and win by a point in the end.

But with just seven of Dublin’s starting line-up from last year named in tomorrow’s team – retirements and travel largely responsible for the dramatic turnover – McGonigle insists they won’t be weighed down by memories of what happened that day. “You can’t really make up for last year, any way,” he said. “but it’s a new group of players, it’s all about 2015, looking forward and not looking back.”

He believes this new team “came of age” in the quarter-final win over Monaghan, holding their nerve in the closing stages when the Ulster side chipped away at their lead, and then there was a comfortable victory over a talented Armagh side in the semi-finals.

Cork, by contrast, had a rockier route to the final, their nine-point defeat by Kerry in July putting them in to the qualifiers, a narrow win over Galway in the quarter-finals setting up a return meeting with Kerry in the last four – which they won by 14 points. The Kingdom, then, paid for their Munster championship cheek.

A crowd of 27,000 attended last year’s final but Marie Hickey, president of the Ladies’ Gaelic Football Association, is hopeful that they can top the largest attendance at a women’s sporting event in Europe this year (the 30,710 crowd at the women’s FA Cup final in England), and maybe even beat the record All-Ireland final crowd of 33,000 back in 2001.

If favourites Cork have their way, it won’t be the only record set on the day.