Down to be tested by Tyrone 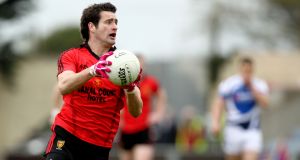 Of the 20 years since Down won the Ulster title, the last 15 have passed without them opening the championship with a home fixture, an extreme example of the luck of the draw going against a county. On a more positive side, the last trip to Omagh ended in a draw after which they won the replay.

There’ll have to be a radical turn-up if that outcome is to be repeated, as Tyrone have spent a comfortable season in the top division of the league while Down were passing the time respectably in Division Two without earning promotion.

Attacking displays
The most striking thing about the published teams is how conservative Micky Harte’s selection looks. During the league season Tyrone showcased some of the best attacking displays in Division One and played an open, man-for-man, type of game.

The selection of Ciarán McGinley, more usually a wing back, at wing forward suggests there is supplementary work to be done.

Seán Cavanagh is started in the half forwards, which would be his ideal placing were an adequate centrefield replacement to be found. According to tomorrow’s team, Conor Clarke is being given a chance to see if he can fit the bill beside Colm Cavanagh.

Down were erratic in the league but have are always given a chance in these matches simply because of a pedigree that includes winning in Derry last year, beating Tyrone in 2008 and nearly lifting the All-Ireland from nowhere two years later.

Manager James McCartan alluded during the week to the challenge of finding Kevin McKernan’s best position and he starts at wing forward, hoping to find the form that got him four points from play against Derry last year and eradicate the inconsistency that saw him not score against the same opponents a month later in the qualifiers.

Defensive sensibilities
There is also a useful inside line in Donal O’Hare, Niall Madine and veteran Benny Coulter. But, viewed on its merits, it’s hard to see how, even with attacking potential and their enhanced defensive sensibilities, they can keep out Tyrone’s forwards.

With both of the O’Neills, Ronan and Stephen, on the bench plus Connor McAliskey there’s plenty of additional fire power to come into the side.

1 America at Large: Golfers guilty of legitimising Trump’s toxic regime
2 Ireland, France or England? Who needs what to win the 2020 Six Nations
3 Solskjær’s stock is on the rise again after clever squad rotation
4 Gael Fickou shifted to the wing as France name their XV
5 ‘This is not a personality contest’ - Jack Nicklaus endorses Donald Trump
Real news has value SUBSCRIBE