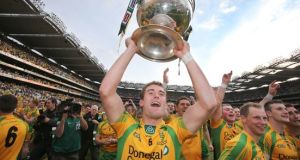 Donegal’s 2012 All-Ireland winner Eamon McGee has opened up on his former struggles with anxiety, panic attacks and alcohol.

McGee admits that he was “renowned more as a partier than a footballer” for a period during the 2000s.

He made his Donegal senior debut in 2004 but found it difficult to adapt to life as an inter-county footballer.

“For me, it was just culture at the time. The lads all enjoyed the pints, didn’t take things too seriously.

“It suited me but none of the lads suffered from anxiety attacks or panic attacks or they didn’t develop a dangerous relationship with alcohol.

“A big enough social scene was a big part of it and unfortunately, I had other things going on in the background, too. When you add that in, it was just a bad combination. It wasn’t conducive to an elite athlete.

“For me, buses was a big one. I’m sitting on the bus sweating, on the way to college. You don’t want anyone else to know. You’re jittery, it was a wild struggle to hide it. You’re thinking you’re going to die here, you’re going to have a heart attack on a bus. It’s tight stuff.”

McGee also reveals how he was “sceptical” about Jim McGuinness, following the All-Ireland winning manager’s appointment in 2010.

Defender McGee also explains how he went drinking after meeting McGuinness first, and was then dropped.

He said: “When Jim McGuinness came in initially, he’s on about winning All-Irelands.

“I was very sceptical of him, he dropped me from the panel for the first few months because from my initial meeting with him, I says ‘Jesus, I’m away for a few pints here.’ He got word of it, he said ‘Jesus I don’t like this, this is the old Donegal, this isn’t the Donegal I want to be part of.’

“It’s hard to explain until you experience it but it’s night and day, polar opposites of each other.”

McGee finally called time on an inter-county career that spanned 13 years but admits that he struggled to fill the void for a period after that.

He reflected: “Life’s good now. At the time, when I retired, I probably didn’t really know the massive decision that I’d made. It wasn’t until it was about two or three months afterwards, I went through a downer, whatever you want to call it.

“I was in bad form, I struggled with that whole identity as a Gaelic footballer and an athlete. I definitely struggled with it. I think that happens to everybody. Some people have the tools to deal with it better than others. I’m in a far better spot (now).”

McGee also speaks about the adjustment to life after inter-county football.

“Small things, you’re going to the gym and you’re paying for your gym membership.

“It was the first time in 15 years I had to pay for a pair of shorts.

“Your diet…you can eat as much chocolate as you want and not feel shit after eating a bar of chocolate, thinking ‘Jesus, I must work harder tonight to work that off.’

“It’s like a teenager when he suddenly finds himself in college. There’s this massive freedom and he doesn’t know what to do with it.”

At the end of that difficult spell following his retirement announcement, McGee freely admits that “I was a nightmare to live with.”

He added: “From an early stage of my career, I would have struggled in terms of the mental health side of it. I’d have made a lot of wrong decisions.

“I thought I had come through that but I could see old behaviours coming back. I had to go back to the tools that I had acquired during that time and try to work my way out of it.

“But for two months I did nothing, I didn’t fill the void, I’ve already filled it with old habits, bad habits.

“I probably reverted back to, not completely but parts of me, old behaviours creeping up.

“Joanne (his partner) had to pull me up and said ‘listen, you go back and do something in the gym’ or ‘you get back and do what got you into good form in the first place.’

“You have to try and fill that void but me being me, I didn’t listen to her at the start. I knew it all. The form got bad, I had to try and get a more balanced lifestyle here. I got back to using those tools I had acquired.”

Women’s Mini Marathon won’t be rescheduled in 2020 12:03
World Rugby approve law trials to reduce player contact 11:26
Science shows that sports events going ahead was ludicrous 07:13
Learning from New Zealand’s return to sport; Trump gets back on the course 06:53
Zoom calls with Rory and the GUI bake-off: Neil Manchip keeping the flag flying 06:00
Crossword Get access to over 6,000 interactive crosswords