Cork’s experience to prove too much for Mayo

But the outstanding Cora Staunton the big threat to holders’ hopes 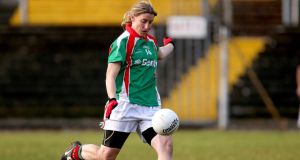 Cork are in a similar boat to Armagh, having not played a competitive game since the TG4 Munster final victory over Kerry last month.

But any hopes that potential pretenders to their All-Ireland crown harboured about a drop in standards were blown away emphatically as Cork put 6-14 past the Kingdom in the provincial decider.

Goalkeeper Elaine Harte and former midfielder Juliet Murphy may have slipped into retirement but Cork’s conveyor belt shows no signs of slowing down. The Rebelettes are aiming to lift the Brendan Martin Cup for the ninth time in ten seasons but Mayo will prove a tough nut to crack.

The Westerners stuttered past Westmeath last weekend but Cora Staunton was in superb scoring form again, registering 2-6 and the winning free to get her side over the line.

A cracking tie is in store and last weekend’s game should bring Mayo on a lot but Cork, who are almost five weeks without a competitive game, proved last year that you cannot back against them in knockout games. Verdict: Cork

Johnny Sexton returns to captain Leinster against Saracens 12:23
Solskjaer scathing of England’s handling of Mason Greenwood 11:57
Rory McIlroy starts well in US Open, Zlatan ensures there’s no Tallaght fairytale 07:57
Naomi Osaka to miss French Open with a hamstring injury 07:06
Dual clubs flourishing thanks to knowing exactly where they stand 06:05
Crossword Get access to over 6,000 interactive crosswords