Cluxton, Beggan, O’Rourke, Morgan – these guys are number one in more ways than one 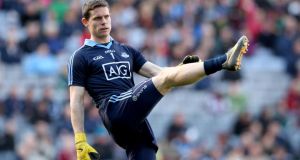 Dublin’s Stephen Cluxton: has helped transform the goalkeeper’s traditional role into something much more fundamental to how the team operates. Photo: James Crombie/Inpho

Here’s a story, true as God. I was talking to John O’Dwyer the other day, Micko’s son. He started telling me about how his brother Haulie (Micheál) had been involved with the Waterville under-14s for a while there but that it hadn’t been going too well. They lost one game by 24 points in fact and so one night he asked Micko would he come in and take the boys for a training session.

Micko said he would alright – but sure one session was never going to satisfy that man. Even at 78 years of age, he’s an addict. He took them over lock, stock and barrel. The South Kerry championship was a kind of a round-robin thing and so eventually they came up against the crowd that had beaten them by 24 points again. This time they beat them by 13. And of course they ended up winning the thing out.

John was telling me all this and the pair of us were laughing away at what it is that makes the man such a genius. He’s 65 years older than these lads but he can still find a way to make a connection with them, to give them self-belief, to make them play for each other and win. It’s nearly depressing for the rest of us.

And Micko’s mad for it still. John asked him one of the nights how training was going he said. “Do you know now, I decided to give them the weekend off. They were a small bit overcooked by me,” he replied.

Overcooked! An under-14 team! This is how deep into it he is. What a hero.

Put it this way, you never saw Charlie Nelligan jogging up to take a free. Charlie actually played outfield for Castleisland for a while but he had to go back into goal eventually because he was too dirty. You couldn’t leave him out the pitch because he’d get into a temper and harm the team.

I remember playing a club game against him one time and we had a cousin of Dara Ó Cinnéide’s playing for us, Cathal Ó Duabhda. We were the same age and, in 1993, I would have said Cathal was the best minor in the county bar none. But Charlie didn’t pick him for the Kerry minors that year for whatever reason.

Anyway, in this club game against Castleisland, a row broke out at one stage and everybody got in amongst it. Cathal saw this as his chance for retribution and went in and gave Charlie a kick in the arse. Bad idea. Charlie turned around with murder in his eyes and Cathal took off. He chased him around the field for a good 10 minutes. The row was long over and Charlie was still out for blood. It was comical stuff.

Charlie was stone mad. A great goalkeeper but a pure agitator. Páidí would always have said that Charlie got him in more trouble than he ever got himself into. Any rows there were in the Kerry full-back line, you can take it Charlie had a hand in stirring them up. He’d be forever mouthing at the full-forward on the other team, telling him he was useless or he was a stone overweight or worse. He’d nearly rev them up into a better performance.

The goalkeepers today are a different breed. The job just isn’t so much about stopping goals going in. You could argue that that’s not the most important part of their remit any more. Kick-outs, free-kicks, 45s – these are what you need a goalkeeper to be good at now.

He was a goalkeeper as a minor so it wasn’t a completely new idea but the main thinking behind it would have been for his kicking. In fairness, you could see the sense in it.

You watch Beggan the other day for Monaghan – he tipped up to take his frees, chipped them towards goal and had his back turned to jog back down the pitch before the ball even cleared the bar. His technique was just so easy and simple.

It was like watching Ernie Els or Phil Mickelson, doing it on pure feel alone.

When we were growing up, the goalkeeper was usually the lad who wasn’t good enough to play outfield. And by good enough, I mean he wasn’t an accurate enough kicker. Nowadays, at county level anyway, they’re nearly the best players in the team with the ball at their feet.

And Paul Durcan in Donegal, who might just be the best of the lot.

That’s the standard now. It can’t just be a secret weapon or an add-on. To be a top-class intercounty goalkeeper, shot-stopping isn’t top of the list. That’s the reality. Teams with blanket defences don’t give up that many goal chances anyway.

On average, a goalkeeper might have to make a couple of saves a game, maybe three or four if they’re under pressure (okay, maybe six or seven against the Dubs but they’re the exception).

On Saturday night, Beggan had to take 26 kick-outs and he came up to take six frees. He only had to make one save all night.

So in a way, it only makes sense for teams to require more out of goalkeepers with their feet than with their hands. That change in emphasis changes the game. High fielding is all but gone because the top goalkeepers don’t kick the ball out into a place where there will be competition for it.

Boring old midfielders like me might not like it but that’s the way it’s gone. Football now is about possession first and foremost. The Footballer of the Year is Michael Darragh Macauley, a midfielder who almost never catches the ball above his head. Instead he has another brilliant footballer playing in goals, orchestrating a system that means Michael Darragh runs into a certain spot on the pitch where the ball hits him in the chest.

Our goalkeeper was Diarmuid Murphy and there’s no point in me pretending that we had any great meticulous plan for kick-outs in Murph’s time. We had no plan. None.

Jack O’Connor came to us in 2006 – me, Murph and Tommy Griffin – and said: “Look, we need to sort something here. We can’t be going along without a plan for this. Work out some sort of hand signal between ye.”

And with that, he left us at it to come up with how we were going to work it. He was right, of course. But he reckoned without Murph. Now, I went to school with Murph and Tommy knew him from when he was a kid as well. A great fella, totally hilarious. But like all goalkeepers, Murph would paddle his own canoe.

“Lads,” he says. “I have no problem with kick-outs. I have no issue with left hand, right hand, whatever. As long as the ball ends up 90 yards from my goal, I don’t care what we do. I’m up for anything as long as it’s kicking it out long.”

And when it came down to it, that’s what he did. Every ball went out long into the middle and we never had a notion what side it was going or which of us he’d be aiming at. Murph’s priority was getting it to hell out of his side of the pitch and after that we had to make the best of it.

Those days are gone. In one way it’s good that they’re gone but in others it isn’t. As I say, high fielding is the major casualty. That’s a skill of the game that is being sidelined because the top teams just aren’t willing to take the risk any more.

Instead you have short kick-outs and you have teams running plays with four different men making four different runs to get one of them into space. It’s impressive to watch from the stands and it obviously takes a lot of work on the training field. But if it keeps evolving this way, the high catch will become extinct.

It’s the same thing with goalkeepers coming up to kick frees. The Monaghan lad on Saturday night ended up coming forward for two 30-metre frees right in front of the posts.

Now I can understand the 45s, I can understand the ones from an angle. But if Monaghan don’t have one forward who can kick a 30-metre free in front of the posts, even with Conor McManus gone off for a black card (undeserved, but that’s another day’s work), then they’re in trouble. By rights, any top team should have four or five of them.

The game has made huge strides as elite teams become more developed and look for more and more edges. But if we’ve got to the point where the goalkeepers are more reliable point-scorers than the forwards, I don’t think that can be described as a step forward.