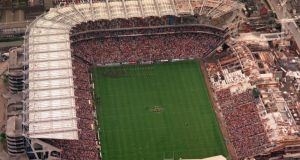 An aerial view of Croke Park on All-Ireland hurling final day in 2000, when Kilkenny met Offaly, yet another occasion when the attendance was less than the football equaivalent that year, when Kerry beat Galway, after a replay. Photograph: David Maher/Sportsfile

The attendance at Sunday’s hurling final was 81,651 and given it fell short of the official 82,300 capacity, the figure is likely to be smaller than for this year’s football final.

This reflects a trend over the past 20 years and has been identified as a puzzle by UCC academic and Cork All-Ireland hurling medallist John Considine on the sports economics blog he has helped to establish, sportseconomics.org.

Since 1993, the last year of the old Croke Park stadium, the attendance at the hurling final has only exceeded the football equivalent twice – 2007, when there was one more spectator, and 2010 when the crowd at the hurling was 161 greater.

Otherwise over those years, football final attendances have exceeded the hurling equivalent by a total of 12,911 – or an average of 646 a year.

“There is no shortage of demand for tickets for the hurling final,” says Considine, “so one would imagine that Croke Park would be full to capacity for every hurling final. Yet, an examination of 20 years of data shows that more people attend the football finals than the hurling finals.

Croke Park officials have no definitive view of why this has happened but one speculated the greater spread of football counties meant the demand for tickets was maintained all of the way to the final whereas because hurling has a more restricted catchment, demand plateaus in the days before the final, with a number of tickets going undistributed.
lThe broadcast on RTÉ of Sunday’s All-Ireland hurling final became the second most-watched programme of the year so far, drawing an average audience of 885,200 viewers