Boxers, sailors and Paralympians among top earners as ISC funding is cut by 20 per cent 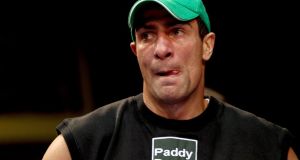 Boxer Kenneth Egan receives a grant of €12,000 despite announcing his retirement in February. Photograph: James Crombie/Inpho

As always winners and losers were scattered among the pages of named athletes that were awarded financial support yesterday under the athletes’ Carding Scheme. There were anomalies too with names that were in the highest €40,000 category now completely out of the picture and others who made comparatively modest targets pushed up the ladder.

In all the Irish Sports Council (ISC) gave away €1.7 million compared to last year’s €2.34 million, which is a drop of around €600,000 or approximately 20 per cent. This allocation to the top-end athletes compares with a less extreme 2.9 per cent drop for the overall figure for sport.

But as the ISC explained, year by year the money is going more towards the governing bodies who support the athletes, at least those with fit for purpose structures and good governance.

In days gone by there were no real structures in place for Irish athletes and the funding they received was based on them hitting targets and winning medals. Athletes such as Sonia O’Sullivan took her package and used it as she wanted racing all over the globe. The thinking on athlete support has recently changed.

“Essentially what we are doing is pushing more of the responsibilities onto the governing bodies,” said John Treacy, chief executive of the ISC. “At the end of any Olympic cycle you would have a fall off in the number of people. We have gone through a transition period in terms of people retiring and moving on so you would expect that to be down at the end of the Olympic cycle.

“With a couple of sports, the money has been given directly to the NGB and we have taken them off the carding scheme.”


Highest rewards
Of all the sports, boxing attracted the highest rewards, largely from its London 2012 success. Katie Taylor, John Joe Nevin, Paddy Barnes and Michael Conlan, medallists from last summer were given €40,000 each with Joe Ward , the teenager from Moate and European light heavyweight champion, also included in that category.

Ward’s elevated position may have been an enlightened view taken by the ISC as he did not qualify for the Olympics but is recognised as a jaw dropping talent and this year a possible European and World Champion. But just as few quibbled with the southpaw’s allocation, Ken Egan’s €12,000 was a debating point.

The Beijing silver medallist publicly announced his retirement from competitive boxing in February after Ward had beaten him for the Irish senior light heavyweight title for the third consecutive time. Elsewhere Irish athlete Derval O’Rourke, who just missed out on a hurdles medal at the recent European Indoor Championships, is also on €12,000, the same award as Egan.

“Billy (Walsh) is anxious to keep him (Egan) in the High Performance unit. He rates him highly as a coach so will review it and he’s one of those cases where we want to make sure that we do the right thing for a fella who has done so much for Irish sport,” said ISC High Performance Director Finbarr Kirwan.


Podium material
More sound thinking. But Fionnuala Britton, a twice European cross country champion and a recent bronze medallist at European level is not considered podium material, or the €40,000 class, while Robert Heffernan, who has not medalled at major championship level is in that category.

The boxers and Heffernan aside, only sailors Peter O’Leary and Annalise Murphy are on the top-grant category along with a clutch of elite Paralympic athletes, who have been rewarded for bringing home sixteen Olympic medals. No surprise then that there are more podium Paralympians than Olympic athletes in the Carding Scheme.

“With regards to Derval, Kevin (Ankron) has spoken to her with regard to what the allocation will be and that is based around the criteria for 2013 and that is a decision taken between Athletics Ireland and ourselves,” added Kirwan. “We are under a really tight control with regards to our funding for carding in 2013.”

The entire sports’ investment package for 2013 is €33 million, which breaks down into €19.3 million for National Governing Bodies, €5.1 million for Local Sports Partnerships and €8.6 million for the High Performance end.

Of the €19.3 million for National Governing Bodies, €7.6 million goes to support the programmes of the FAI, GAA and IRFU.

“Investment in sport is an investment in the health of this country,” said Minister of State for Tourism and Sport Michael Ring. The sports budget has been cut each year for the last four years.

1 No Masters, so Tiger Woods battles son Charlie for green jacket
2 Conor McDonald: ‘People in fitness industry need to be careful what they put online’
3 Germany well ahead of the curve as Bundesliga gears up for return to action
4 America at Large: Hurling fan Dowling leading the fight against Covid-19
5 Spectator sues Tiger Woods and his caddie over incident in 2018
Real news has value SUBSCRIBE