From happy bunnies to Donkey Kong, it’s been a wild ride

Irish punch above their weight, while the English keep a clean sheet 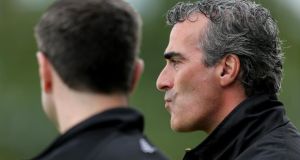 Jim McGuinness has had a different view of his native Donegal this summer. Photo: James Crombie/Inpho

That was a good spin, from Baku to the Curragh to Clones to Vancouver to Croke Park in just the 24 hours, starting with a couple of boxing gold medals and finishing up with Joe Brolly rabbiting on about Jim McGuinness introducing footballing Myxomatosis to Ireland.

Quite a potpourri, then, the journey beginning with a happy bunny on Setanta, Paul Dempsey, talking us through Katie Taylor and Michael O’Reilly’s triumphs at the European Games in Azerbaijan, concluding that Ireland had “punched way above their weight” at the event.

And then it was over to the Curragh in time to see Tracy Piggott talking to Bing Crosby’s girl Mary about shooting JR, and you began to think the day couldn’t getting any more surreal. Until Brian Gleeson tried to explain to Ted Walsh and Johnny Murtagh why the Godolphin people hadn’t made it over to see their Jack Hobbs win the Derby.

Brian: “It is Ramadan, so it’s understandable.” Ted: “Is it? A bit like our Lent, is it?” Johnny: “A bit worse than that!” Ted and Johnny: [Chuckles] Brian: “You have to respect their culture.” Ted and Johnny: [Silence]

Then off to Clones where you’d be wiping your eyes at Mr Myxomatosis watching his Donegal from the Sky Sports studio rather than the touchline, a bit like, say, Picasso chatting about cubism rather than unleashing his brush.

And then off to Vancouver for England’s World Cup quarter-final against hosts Canada. Lots of complaints about Jacqui Oatley and her panel being marooned in an English studio, rather than setting up a Canadian camp now that the team is advancing towards the final.

But if the Beeb sends them over for the semi-final against Japan on Wednesday and England lose, they’ll be talking about the Curse of Auntie forever more. Probably better to stay put, then, even if it’s a struggle to capture the atmosphere of these big occasions when you’re 4,000 miles away.

You could only giggle, which is what the two Rachels, Yankee and Brown Finnis, came close to doing at half-time when Trevor Sinclair declared that if England, 2-1 up, “keep a clean sheet in the second half they win the game”, the women wondering if he was getting paid for this.

“We’re gutted, absolutely gutted, aaaaah shit,” he emoted in his post-match chat, so at least he was open with his feelings.

Like Joe. “He’s as useful as a chocolate teapot,” he said of Westmeath’s ‘sweeper’ at half-time in their tussle with Meath, neither himself nor Pat Spillane impressed with the county’s defensive efforts.

And then Westmeath won. And they’re erecting statues of Joe and Pat in Mullingar as we speak. “They abandoned the sweeper and wint for it,” Pat tried to explain, Joe nodding for the first time ever.

So the people of Kildare would have been hopeful of success after the pair wrote off their chances against Dublin, Pat reckoning it was “Barcelona playing Yeovil Town”.

Some time later: Dublin’s biggest win over Kildare since 1897, Darragh Maloney told us.