Croke Park has no issue with Penn State history 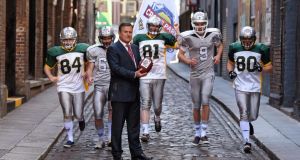 With just over three weeks to the Croke Park Classic, an exciting programme of events around the American College football game between Penn State and the University of Central Florida was announced by the Lord Mayor of Dublin, Christy Burke and Croke Park Stadium Director Peter McKenna.

The Croke Park Classic between Penn State and University of Central Florida (UCF), takes place on August 30th, the day before the second of the All-Ireland football semi-finals and arrives as Penn State serves out record sanctions imposed on it by the governing body of college football, the NCAA.

With an expected 20,000 overseas visitors expected for the game, Penn State are still adjusting to a raft of prohibitions as well as a $60 million fine in the wake of the Jerry Sandusky scandal. An assistant coach to the revered Joe Paterno at the college, Sandusky is currently serving 30 to 60 years in state prison for molesting 10 young boys.

Paterno, who was the most successful coach in college football, before 111 games he had coached and won were scratched from the record books, was dismissed by the college. Three Penn state administrators are also awaiting trial on charges they covered up abuse allegations.

“It was absolutely something that we thought long and hard about,” said McKenna. “We have a very strong child protection ethos and policy within the GAA. What we felt was that the college handled this very well.

“They were immediate and emphatic in the way they responded to the issues of child sexual abuse. I think they put in place a whole series of protocols as well.”

Since the scandal in November 2011, Penn cannot compete in postseason competition including the Conference Championship, any Bowl game or any post season playoff competition. Their grant aid was reduced and the entire Penn State football team record under Paterno’s control from 1998-2011 was vacated. Also, any athlete entering or returning to Penn State was allowed to immediately transfer to another college.

“They were penalised and, dare I say it, rightly so. In any sport or organisation they are abhorrent activities. And it is worth talking about. It is worth saying there is a better way and I think Penn State have adopted a better way taking an immediate and emphatic response to it.”

Croke Park had made efforts to attract NFL to Dublin but they seem have to have pitched their tent with London, who will host six games this year. But McKenna points out that College football, which attracts enormous audiences in the USA, is a comfortable fit with the GAA’s amateur ethos.

“We put a lot of effort trying to get the NFL into Dublin,” added McKenna. “But I think they have decided now that London is going to be their camp – six games this year – so we’ve put our focus on Collegiate football, which is probably closer to our ethos because they are all student athletes and by definition amateurs.”

Most of the 45,000 tickets are already sold with the walk up sale over the next couple of weeks expecting to take the overall figure to 55,000.

The GAA estimate that with 20,000 people arriving from overseas, staying for five days and spending €300 a day, the city could take in as much as €30 million.

“This is an investment. We are absolutely going to wash our face,” he says. “ We think running it every other year will work well. Then we’ll get momentum behind it. There’s talk about Notre Dame coming back in 2017 and that would be a huge element to the whole thing.

“This match opens the season. It’s hugely important so we will have a clear vista on ESPN to 10 million Americans on a Saturday morning.”

Temple Bar in Dublin’s city centre will become a fan zone for the weekend where prep-rallies and the pre-game party will be held. UCF and Penn State will be playing for the Dan Rooney Trophy. Rooney, a former US ambassador to Ireland, is chairman of the Pittsburgh Steelers.