Coming to a Gaelic football venue near you: Bainisteoir Battleship

‘We are heading inexorably towards a senior football horizon consisting of little more than tactical machinations of managers manoeuvring muscle-bound, middle-distance athletes’ 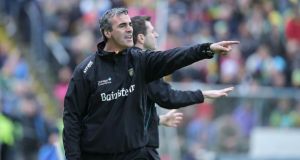 I’ve had it with Gaelic football, and it’s all thanks to Joe Brolly. And I’m grateful. No, really. I mean I’ll still keep an eye on the championship; in much the same way most of us keep an eye on politics, as aware of its droning ubiquity as we are of our own cannon-fodder role within it. But any emotional stake there might have been has gone. It was mostly gone anyway, but Joe put it out of its misery, by simply telling it as it is.

That’s why he’s telly gold. Even when it isn’t as it is, Joe will still tell it. You gotta admire that, even when you’re spitting feathers at him. But it’s not just telly. Even barristering and punditing ain’t enough straight-shooting practice for a garrulous Gael with an extra-curricular reach that also rises to producing a column for a news organisation so Gaelic, it even puts “Oirish” in its title. And it’s a recently spieled Joe piece that did the trick, under a headline proclaiming: “Football has changed . . . it’s all about the managers now.”

And the thing is, he’s right: on both counts. It has changed, and it is all about the managers.

Now I’ve looked at the old games on TG4, and yes, some of the stuff is pretty woeful. And some of it isn’t. And, yes, yours truly is a fossil in terms of appreciating the tactical revolution that has altered the face of Gaelic games in the last decade, not to mention those advances in conditioning that led “Gooch” Cooper to reveal recently that he probably wouldn’t get his game now if he was 19 and still built like a jockey’s whip.

Soap opera
But there were certain timeless elements, or at least there used to be. And the most timeless of all was that the game was fundamentally about the players. During the height of the Seanie Johnson soap opera, this corner sided with Seanie on the simple basis that whatever chance there was of fans paying to see him, there was no chance at all of anyone ponying up to see the sideline suits that were so dudgeoned by his defection. Except that’s just not true anymore.

Okay, GAA managers haven’t gone all Mourinho yet by standing on the sideline in Gucci finery. But the essential point is the same. When Joe says the All-Ireland is becoming a best manager competition, he is only stating a fact: just as he is when pointing out how even an ordinary bunch of players can be moulded into champions by the right messianic figure.

Donegal were also-rans until Jim McGuinness got at them. James Horan has steered Mayo almost a full 360 degrees from their entertainingly flaky heritage and turned them bad ass. Dublin would still be waiting for an All-Ireland if it wasn’t for Pat Gilroy. And Tyrone had a hex on Kerry, basically because Mickey Harte got under Jack O’Connor’s skin.

The result is there isn’t so much a cult of the manager these days as an all-encompassing religion, facing north, mostly, towards the altars of fitness, organisation, blanket “dee-fence”, systematic cynicism, cod-psychology and a glorification of the sort of pulling and dragging that would once have been dismissed as the preserve of the talentless, but is now coated in a tactical sheen of legitimacy.

And if that floats your boat enough to keep coughing up at the turnstiles, then good for you. Devotion to the county cause is hard to shake off. But how long will such devotion allow anyone avoid the conclusion we are heading inexorably towards a senior football horizon consisting of little more than tactical machinations of managers manoeuvring muscle-bound, middle-distance athletes in games of Bainisteoir Battleship, where skill is secondary to running all day and swarming around an opponent in possession of the triviality otherwise known as the ball.

Bullshit merchants
Of course to point out the fundamental dullness of what passes for so-called modernism is to risk being dismissed as a reactionary crank. Gaelic football we are assured is growing up, maturing, becoming as tactically nuanced as the great Satan that was soccer, while simultaneously picking up the same assortment of bullshit merchants that have overwhelmed the world game.

A lot of the those soccer merchants are in possession of managerial suits and are fluent in the jargon of fitness, formation and effin’ physicality: bringing a hard-to-beat, nick-a-goal, pack-the-defence sensibility that can make for stultifying boredom, something which in turn has made the recent success of Spain and Barcelona so reverentially welcomed by those millions who cling to the idea that paying at the gate demands a certain entertainment quotient in exchange.

Teams with Xavi, Iniesta and the peerless Messi are never going to be accused of gigantism, or cynicism, or eye-watering ugliness.

Not only does their skill win out, it wins out in style.

When is the last time that was said of a top Gaelic football side? And what kind of sport could make a skinny corner forward from Killarney with magic in his feet feel superfluous because he can’t bench-press three times his body weight? And what public appeal can there be in a sport where the most important participant isn’t a participant at all, but a sideline generalissimo plotting what is and isn’t verboten under the all-encompassing system?

It’s actually all too depressing for words. So, I’m not going to waste anymore of them. If you want to talk football, talk to Joe.