Chess, the church and the Cold War: The life of Fr Bill Lombardy 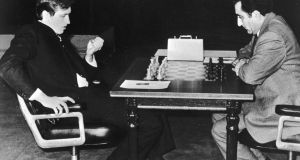 For the most seismic showdown in chess history, the Soviet authorities assembled an extensive support network of 35 grandmasters to travel to Iceland.

The brains trust was tasked with analysing every game, parsing each move, and providing wise counsel to Boris Spassky during breaks in play. At the height of the Cold War in July, 1972, with the whole world watching on, the Moscow regime wanted to afford their man every possible advantage.

His opponent, America’s Bobby Fischer, arrived in Keflavik accompanied by a single second, a burly Catholic priest from the Bronx named Bill Lombardy.

When Fischer wanted to leave in a huff after losing the first of the scheduled 24 games, exasperated outrage traditionally being his default setting, Lombardy ripped the wiring from his car so he had no transport to the airport, then feigned ignorance of why it wouldn’t start.

As a man of the cloth, he wasn’t proud of the little white lie but he knew it served a higher purpose.

“He passeth the piece that passeth all understanding,” warned the padre before, with others, persuading the irascible challenger to stay and battle for the title.

Later, as Fischer gained the upper hand in the contest, Lombardy left the Laugardalsholl Arena in the middle of one particular game to go and say mass at a Reykjavik church.

There is no suggestion that this divine intervention helped his man at the table although by then the Soviets had become so paranoid they were convinced the Americans used microwave signals and all sorts of nefarious tactics to put Spassky off. When the champion finally conceded defeat in a phone call, it fell to the priest to break the news of his triumph to Fischer.

Lombardy’s bit-part role in one of the more memorable and eccentric episodes in the conflict between East and West was reprised this past week following his death in Martinez, California at the age of 79.

Beyond that cameo in history, it was a measure of his standing and his own outsized contribution to the game that his passing merited a lengthy obituary in the New York Times. If his life, as much as his career, was always destined to be overshadowed by his proximity to Fischer, Lombardy was quite the story himself.

Growing up in an apartment in Hunts Point in the Bronx, he was introduced to chess at age nine by a neighbour. Declared a master at 14, he became the youngest ever New York State champion two years later, quite a feat at a time when the city was the epicentre of American chess.

He went on to win the World Youth title before famously besting Spassky (while playing black) at the 1960 World Student Team Championships in Leningrad, a victory so shocking that the Soviet Chess School disciplined their brightest talent in the aftermath.

En route to becoming a grandmaster while still a teen, Lombardy had befriended and begun to coach a prodigy from Brooklyn. The best and the worst of fortune. Aspiring to the title of America’s number one was always going to be impossible once young Bobby Fischer came of age but it was telling how Lombardy seemed quite content to be a privileged eyewitness to somebody transforming the sport forever.

“Since Bobby, when I first met him at age 11 stated he would be world chess champion,” he said, by way of explanation, “I believed it was my job as his friend and confidant to do everything legitimately in my power to ensure that the young player’s dream would come true.”

His own career prospects were hindered too by a religious calling. He began to travel less and less to overseas tournaments, entered St Joseph’s Seminary and was eventually ordained a priest.

Combining his work at St Mary’s Parish in the Bronx with teaching at a high school, he somehow still found time for chess. At least until an acrimonious showdown with the ecclesiastical authorities about a new assignment culminated in Cardinal Terence Cooke chastising him that, “Chess is nothing but pushing meaningless wooden pieces across a wooden board”.

He left the priesthood soon afterwards, married a Dutchwoman and had a son who told reporters this past week that his father’s dissatisfaction with Catholicism was, at least in part, down to the church’s obsession with money.

The marriage ended in divorce and Lombardy eked out a living in later years teaching and writing about chess while caring for John W. Collins, the iconic coach who had worked with him and Fischer in their youth. He made news last year following an ill-fated attempt to stop his eviction from a New York city apartment for years of unpaid rent.

As was the way with Fischer and most people, the pair inevitably fell out, the relationship never quite recovering from Lombardy writing a piece for Sports Illustrated magazine, describing his friend as “a mystery wrapped in an enigma”. Still, they are bound together forever by the events in Iceland that one summer when chess was, briefly, the most talked-about sport on earth.

After Fischer had signed the paperwork and been officially declared champion of the world, he and Lombardy started back to their Reykjavik Hotel.

On the way, the priest produced a well-worn copy of Fischer’s seminal book My 60 Memorable Games and asked his friend to “write what you feel”.

“To Bill,” he wrote, “thanks for your help and patience.”

Not a bad footnote in history.