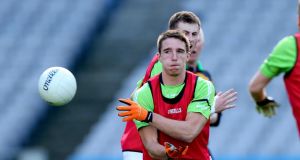 Ireland vice-captain Aidan Walsh says that he should be fit to play in tomorrow’s second International Rules Test in Croke Park. The Cork centrefielder picked up a knee injury in last week’s first Test in Cavan and has an intermediate county hurling final with Kanturk in a week’s time but believes the injury will have healed.

“Hopefully. I don’t know what team has been picked but I’ll just keep doing what I’m doing: keep the knee iced and what not and hopefully it’ll improve over the next few days. It’s not too bad. It was just a bang. I have it cushioned to protect it. It’s grand to run on. It’s just a case of not getting another bang on it and hopefully it’ll be grand.”

He said he wouldn’t have any concerns about playing just a week before the county final. “No I wouldn’t to be honest. I suppose as long as I don’t get a bang on it again. Hopefully it’ll hold up and it’ll be fine.”

‘Heads up’
His team-mate, Meath goalkeeper Paddy O’Rourke was also speaking at yesterday’s Ireland training session in Croke Park and said that keeping goal in International Rules is very much a “heads-up” role.

“ Once you step out on to the pitch, you could have the best made plans in the world and none of them come to pass. You have to play it as you see it. Whether the ball is in your hands or off the ground, if there’s a man free only 20 or 30 yards away you have to give it to him.

“There’s no point raffling it. Especially the last day, looking out the field I think your man Franklin was out the field a bit more and any ball that seemed to be raffled out there, they won.”

O’Rourke believes his goal will be under attack from an early stage, as the Australians, who have a 22-point deficit, will need to harvest goals quickly – an unfamiliar score in their game but worth six points in the international series – to get back into contention.

“In other years there might have been a bit of shadow boxing going on in the first couple of minutes but the Aussies have to come out on Saturday night and throw caution to the wind and go for scores early on and get goals. If they do that it should open things up for us at the other end.”