Against the odds: Vinny shows his hand and legs it to jeers of ‘scab’ 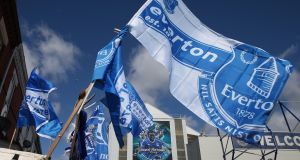 Everton flags outside Goodison Park in Liverpool. It was time for Vinny to show solidarity with his boys in blue. Photograph: Chris Brunskill/Getty Images

The sense of agitation in the canteen of Clontarf bus garage on Tuesday morning was palpable, and it was making Vinny Fitzpatrick feel twitchy. Drivers of all ages and experience were revving their engines over the dispute between Luas drivers and the company operators Transdev.

The stand-off had become nasty, almost cut-throat. All drivers were on protective notice, while Transdev were being hit with fines by the State for failing to meet the terms of its contract.

Even though a further two-day stoppage for the weekend had been averted, neither workers nor management seemed prepared to concede an inch. Like those on the treaty divide nearly 100 years earlier, middle ground was absent as fingers were pointed, many in the direction of Transdev.

Big Dave, a 20-year stalwart of the 42 bus, didn’t pull his punches as he held court. “The bottom line, lads, is that Transdev are raking in huge profits and our colleagues are being trod underfoot.

“I’m in solidarity with our brother workers, and I’m leading a march in support this Saturday to the Harcourt Street depot, where we will stand shoulder to shoulder with them. Are ye with me, lads? Are ye?”

There was a roar of approval as Big Dave stood up and held his arms out, and turned his large hands inwards, mirroring Jim Larkin’s iconic statue in O’Connell Street.

Not everyone, however, in the depot was in blood-lust mood. Despite a militant family background – his late father Finbarr was a vociferous shop floor steward – Vinny had adopted a position which wasn’t universally popular with his colleagues. It was time to show his hand.

As the debate was in danger of overheating, Vinny tapped the salt and pepper cruets together, pushed back his chair, got to his feet and cleared his throat. As the “father of the garage” he was entitled to his say without any interruption. The floor was his.

“Lads, I accept the right of any individual to join a trade union, and also for that union to seek the best terms and conditions of its members,” he began. “I’ve been with the NBRU since the early days, never missed my subscription, and value its support.

“I also have immense sympathy for the predicament of our Luas brothers, whose livelihoods are under risk because they are daring to pursue better working conditions, which is their entitlement.

From the back of the canteen, one or two voices muttered “here, here”.

Emboldened, Vinny went on the front foot. “What is also wrong is the empty carriages, empty lines, and empty platforms which have dotted Dublin streets. Wrong, wrong, wrong.”

As growls of unrest began, Vinny pressed on. There was no point ducking into a siding now.

“There will be no winners in this dispute either as the marks of battle will leave a scar. But already there are two distinct losers: Joe and Josie Public.

“On Easter week the country welcomed hundreds of thousands of tourists to Dublin to mark the centenary of the Rising. What did they see on O’Connell Street, on St Stephen’s Green, at Heuston Station? Empty tracks, that’s what. It’s bad enough that people are laughing at us for having no government in place since the end of February. Now we don’t have a proper tram service either.

“Our job, lest anyone in our business forget, is to ferry folk from A to B as quickly and conveniently as possible. No matter what we think about our bosses, once we down tools we lose public sympathy, which is something money can’t buy. Our Luas colleagues should be careful with their next step.”

With that Vinny excused himself, and made for the exit. Not everyone stood to one side, and there were cries of “scab” and “shame”, which stung.

For the rest of the day Vinny stumbled through a fug. He didn’t play the radio in his cab, didn’t whistle, and didn’t even notice a few chancers sneaking on at Fairview without paying.

He knew he had crossed a line, and that some of his colleagues – Big Dave was a golfing friend – would find it hard to forgive him. But the responsibility of a driver, be it on a train, bus, or tram, was to provide a community service. To renege on that was a mortal sin in his book.

He was still wearing a glum look as he arrived home on Mount Prospect Avenue. As he opened the door, and smelt an Italian aroma, his spirits lifted. Angie was not only at home, looking swell, but was buzzing about like her old self.

Angie greeted her husband with a hug and a large glass of Chianti, “to go with the pasta puttanesca”, she smiled.

As he sat down at the kitchen table Vinny was distracted by the envelope on his dinner plate. “What’s this?” he said aloud, before flicking open the flap.

Inside were two tickets for Saturday’s FA Cup semi-final between Manchester United and Everton. “Heavens to Murgatroyd,” he babbled.

He felt Angie drape her arms around his shoulders. “After dinner,” she whispered seductively, “when you’ve booked your flights and hotel, you never know what might happen if you play your cards right.”

Vinny was in a quandary. He was down to work the weekend, and he knew there was no cover because of the march of support for the Luas lads. If he went missing it would smack of hypocrisy. What to do?

He fingered the precious tickets, thought of the 1995 final when Everton beat United 1-0. It was a time for a show of solidarity for his boys in blue. “Angie, you’ve made my weekend,” he smiled.