A little green shoot on the Alpine slopes 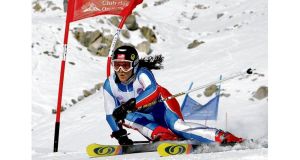 Dubliner Kirsty McGarry negotiates a gate while competing in the French Alps where her love for the sport was nurtured while on holidays in Chatel with her parents, Jane and Ian.

Seán Kennytalks to Dubliner Kirsty McGarry who will shortly represent Ireland in Vancouver at her second witner Olympics.

IRISH OLYMPIC skier. The words jar in the air as though from a singer off key.

“When I tell Irish people what I do, they’re like, ‘What? We have ski racers?’ And in other countries they’ll say, ‘Irish ski racers? You have snow?’ And I say, ‘Well, no’.”

Little snow. Mountains dwarfed by the frozen, hulking peaks of Central Europe. And a skier who will shortly compete in her second Winter Olympics. The strange syllogism requires explanation.

It started on a slope in the French Alps, in a town called Chatel, just shy of the Swiss border. She does not remember learning. The process was organic, bound up with family life.

Nature gifted her and nurture gave form and direction to her talent. When Jane McGarry was pregnant with Kirsty, she and her husband Ian made Chatel their home for the winter, migrating there seasonally, drawn from Dublin by their shared passion. Jane and Ian came to skiing separately and it brought them together. They both qualified as instructors.

And so, until the age of 10, each winter she swapped the flat, grey damp of home for the glacial white of the French Alps. The children of Chatel had a vast mountainside for a school gymnasium. Skiing was on the school curriculum. Literally.

She made full use of the opportunity. The environment seeped into the very marrow of her. “I remember chasing the instructor there as a kid. You’d go off-hill and ski as fast as you could. Now I think of it, that’s such a good base; you’re not thinking about it, you’re just going. You get the speed, you’re fighting to get ahead of the kid beside you.”

There was a raw, vital simplicity to it she loved, glissading down the slope, racing to be first in line behind the instructor. She showed her competitive teeth even then.

When she was nine, and her sister Tamsen was 12, they started racing. The girls’ potential manifested itself in a string of podium finishes. In 2000, Kirsty won the prestigious Ski D’Or slalom in France. Previously, Tamsen had won the same race. She had been booed. It was against the natural order of things that an Irish girl should beat natives of the French Alps in a ski race.

From the age of 10, Kirsty boarded in Rathdown School in south Dublin. She often played truant to go skiing in France, with the blessing of a generous principal. The competing demands of sport and academia were somehow balanced. She left with a good Leaving Cert, but the course she had set through her formative years led inexorably to one destination: life as a full-time skier.

“I went full-time at 17. I always considered it my job and I just wanted to finish school. But it did make it more difficult, because if skiing wasn’t going well, you always had school as something else to be good at. When it’s just skiing, and that’s all you’re working towards, if you have a bad day it’s a lot tougher.”

It was a peripatetic existence – suitcase, slope, suitcase. Racing here, training there. Apart from the family home in Dalkey, she had no base, travelling all over – North America, Europe, New Zealand. It was a life of rigorous routine.

“You’d either be training or racing during the day, doing your skis in the afternoon, doing video analysis, doing fitness training. Then you eat and go to bed.”

People would venture that life as a full-time skier must be glamorous. She has only to think of one visceral day in the off-season at SINI, the Belfast centre for elite athletes. “Where’s your bucket? You didn’t bring one?” asked her fitness coach. He was referring to the tendency of the Cross Trainer machine she was about to step on to call forth the contents of its users’ stomachs.

She marched to its brutal rhythm, gasping and retching, for a whole punishing month. Glamorous.

It can be an uphill struggle. If she were Swiss or Austrian or French, it would be different. She isn’t. Doesn’t want to be. She is proud to represent Ireland. But she cannot defy the gravity of her nationality.

She has not made money from the sport and is reliant on sponsors for equipment. She receives a share of the Irish Sports Council’s fund for elite athletes. There is a large shortfall, though: coaches and physios to be paid, travel and accommodation expenses to be met. Her family have footed much of the bill for years.

Life nudged her home in 2008. Career ambition, a hip operation and a lack of funding were the push and the pull drawing her off-hill and back to college in Ireland. She now studies physiotherapy in the Royal College of Surgeons. She trains and competes still as the academic calendar allows. But skiing has melted away from life’s foreground, at once diminished and crystallised into something new. It’s become fun again.

“I’m definitely more relaxed. I’m putting less pressure on myself, which probably actually helps my skiing a bit. I don’t take it as hard if I make a mistake in a run. I used to be very tough on myself. I decided I had to step back a bit and look more at the big picture, that every race isn’t the end of the world. It’s helped me get more of a perspective. I’m enjoying it more. When you do something every single day it’s a lot harder.”

Her otherness as an Irish skier is cast into stark lonely relief by the support received by her competitors from Alpine nations.

“It’s tough sometimes because you’re watching and they have a ski technician, coaches, physios. And, if you’re having a bad day, you’re thinking: ‘How am I ever going to beat that?’ You look at the money that’s put into them, the support they have. But you try not to think about it.”

There is wilfulness in her, though, and she grits her teeth and ploughs on against the circumstances.

“I know another girl from Belgium, where they have little support as well. She came up to me one day and said: ‘You know, we can never make it, because we’re from small countries. It’s not possible.’ I said to her: ‘Well, if you think like that, you’ll never do well.’ She has actually stopped skiing now. And you could see that coming, because if she thinks like that, it’s not going to happen.

“I tend to think of it as a case of looking at how far I’ve got with what I have had. Imagine how far I would have gotten . . .”

She pauses, letting the words trail off into the icy remembered air of a hundred ski hills.

“But with the lack of training and the lack of support, if I’ve gotten this far, it’s possible.”

This far is further than most get. As far as the 2006 Winter Olympics in Turin, where she finished 32nd of 65 competitors in the Giant Slalom and 42nd of 64 in the Slalom. She has won several medals, golds among them, in FIS (International Ski Federation) alpine races. And now a place on the Ireland team competing in the Vancouver Olympics.

At home, she trains in the Ski Centre in Sandyford, on the closest substitute for snow available. When she gets back on a mountain now, there are still moments, little punctuations, of sheer adrenalin.

“It’s a rush in Super G , when you’ve to turn your skis and go straight down the hill, just force yourself to do it. Your body is thinking: ‘Why are you doing this? This is dangerous!’ I sometimes just have to force myself to do it, so that’s even more of a rush.”

She is working with an experienced and supportive Canadian coach in the run-up to Vancouver. Too often in the past negative coaching trampled on her confidence, with the careless, dull crunch of boot on packed snow.

“You’re not trying hard enough,” one told her. She wondered why she would be leaving her bed hundreds of miles from home at five in the morning if she intended not to try hard.

Her winter ’09-’10 schedule: Christmas and New Year in the French Alps. Return to Dublin for exams. Then back like a bullet to France for more racing and training, prior to Vancouver in mid-February. There, among downhill skiers, hers will be the lone tricolour amid the Alpine reds and whites, the Canadian maple leaves, Scandinavian crosses.

“The fact I’m not putting as much pressure on myself now helps. If you’re focused more on the run than on the outcome that’s definitely going to help. That’s really the aim, to just focus on the technicality of the run and not think, ‘Oh, what happens if . . .’

“In the last Olympics I came 32nd in the Giant Slalom, which is my favourite discipline, and which I was ecstatic with. Especially with not being full-time at the moment, to do the same, or hopefully better, I’d be happy with.”

KIRSTY McGARRY (24) is set to become the first Irishwoman to compete in successive Winter Olympics. Raised in Dublin, she spent childhood winters in the French Alps, where her parents ran a ski school.

Her elder sister Tamsen became the first Irishwoman to compete in the winter Games, when she skied in Salt Lake City in 2002. Kirsty carried the Irish flag at the opening ceremony of the 2006 Turin Games, where she finished 32nd of 65 competitors in the Giant Slalom and 42nd of 64 in the Slalom.

Having been a full-time ski racer competing internationally for five years, she returned to Ireland in 2008 to study physiotherapy at the Royal College of Surgeons.

4 TV View: No need to feel sorry for England, but if it was any other team