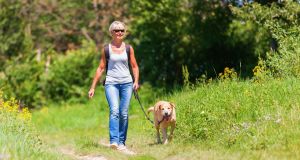 Research indicates that women are typically more risk averse in terms of how much they contribute to their pension fund, and how they wish it to be managed.* Photograph: Shutterstock

The current pay gap in Ireland between men and women is estimated at 14.1 per cent. The gap between the value of men’s and women’s pensions is more than two and a half times that, at 37 per cent*.

At its Celtic Tiger highest, pension coverage for women was 51 per cent. That has since fallen to 46 per cent, while 55 per cent of men have pensions. To put it more starkly, the Central Statistics Office (CSO) indicates that women are twice more likely to be impoverished at age 65 than men. Women aged 75 to 79 are three times more likely to be so.

“When it comes to women and pensions, things are not improving. If anything, they are getting worse,” says Kristen Foran, national sales director of Zurich Life Assurance.

Traditionally there have been a variety of reasons why women’s pensions – both in terms of coverage and value – lag men’s. This includes women’s greater presence in the home, doing unpaid work there that leaves them reliant, perhaps, on their husband’s pension.

Some women experience gaps in their employment history when they have children. Such time out leads to gaps not just in private pensions, but in State pension entitlements too. While there is a scheme in place to provide State pension credits for homeowners, this was only introduced in 1994 and it is not retrospective and their are restrictions to this.

Even where women do have a pension, its performance over time typically lags that of men. Here research indicates that women are typically more risk averse in terms of how much they contribute to their pensions fund, and how they wish it to be managed.**

Women’s retirement prospects vary by sector too. Of women aged between 45 and 54 in the education sector, one in four (25 per cent) have no pension. In the health sector that rises to almost one in three (32 per cent). Surprisingly, women working in the financial and business sector, who might be expected to know more about financial security, fare even worse, with 39 per cent of women in this age group having no pension.*

That climbs to 62 per cent for women working in retail and wholesale. In the hospitality sector - a major employer – less than one woman in five of this age group have a pension. Given that these figures encompass private and public sector pensions, and we know that public sector coverage is 100 per cent, the actual private coverage is worse.***

What should really set alarm bells ringing for women is not the fact that things are this bad, but that, “if anything, they are getting worse,” says Foran.

Part of her job as national sales director at Zurich is to try and figure out why this might be. In truth, she only has to talk to her girlfriends to find out. “Part of it is that women don’t want to think about pensions because they typically don’t want to think about getting older. More than that though is the fact that they tend to have priorities other than themselves, typically children and family,” says Foran.

Any time she mentions the importance of pensions to her peers, she’s met with the same stock replies: “They’ll all say, ‘Sure who can afford it?’ And that all their money is going into their kids, so it goes on the long finger.”

It’s important for women to start having that conversation about what kind of retirement they envisage. Women are living longer than men, so our needs are greater.

Marketing professionals know of the truth in the old adage that men buy for themselves and women buy for everybody else. This too may be part of the problem. “We don’t prioritise ourselves, and now we are the squeezed generation - women with both kids and eldercare commitments,” says Foran.

But there is another issue with the pensions industry that she also believes is preventing women from ensuring they have independence – in the form of financial security - in retirement.

Pensions are sold, not bought, she points out. “No one comes banging on the door looking to buy a pension. The value of it has to be explained, which means they have to be sold. Does the industry need to look at communicating better to women and developing pension plans designed to suit their needs? It would certainly help to increase engagement from women,” Foran says.

Consequently, one of the most effective ways to bridge the pension gender gap would be if more advisors were women. “The fact is, where women do advise on pensions, they are really good at it because they are strong on the empathy side and they understand women’s needs and concerns,” she says. “If we had more female advisors in the industry it would go a long way towards helping women’s status in relation to pensions.”

In the meantime, social media might help. “Women are the social junkies of the world and if you look at the top 100 digital influencers in Ireland, the majority are women. We can see social media as a really powerful way of getting this message out to women,” in a communications style that suits them, and that comes via a referral network they trust.

In many ways, for women of a certain age in Ireland, talk of pensions is almost as taboo as talk of menopause, she admits. “Yet if you think about it, on US TV shows like Friends you hear people talking about their 401K retirement plans all the time. It’s a much more prevalent topic of conversation there. Here women don’t want to talk about it. But it’s important for women to start having that conversation about what kind of retirement they envisage.”

The first step towards figuring out what those needs are is for women to visualise the kind of retirement they want. By her own estimate, Foran reckons she’d need the State pension and a minimum pension of €20,000 a year to be able to enjoy retirement.

“Wouldn’t it be nice to feel financially secure and live the life you’ve always dreamt of in retirement,” Foran asks? “Planning your pension now is the first and most important step to fulfilling this dream. There are lots of tools and advice to help you on the way including The Pensions Authority women and pensions checklist.”