From whale watching to hillwalking, Cork’s coastline is packed with unique experiences that build an appetite 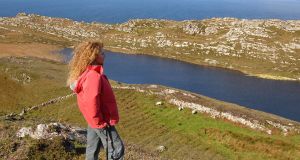 The land and ocean of West Cork offer a bounty of food from the land and sea that are in a class of their own, in fact world-class. The Haven Coast, a stretch of the Wild Atlantic Way along County Cork, offers other world-class recreations too, including what is considered to be some of the best whale watching in Europe. It is a part of the Wild Atlantic Way that is brimming with activity and puts the visitor directly in touch with the natural environment.

The beauty of the Haven Coast is its size; there are so many stunning fishing villages, beaches and cliffs along this stretch of the Wild Atlantic Way, but you never have to travel very far to get to any of them, leaving the visitor with plenty of time to relax, unwind and savour the unique experiences this region offers.

West Cork was recently named as the top foodie destination in Ireland, beating off strong competition and it’s clear why. Highlights include mozzarella produced with the milk of buffalo that roam freely outdoors in Macroom to Sally Barnes' smokehouse in Skibbereen. This smokehouse offers a product so good, not only has it won a plethora of top awards in Ireland and England, but chef extraordinaire, Richard Corrigan, says a side of Sally’s smoked salmon is his favourite food gift.

As we set to work, cranking up smoking machines and laying out whole glistening fish, Barnes talks passionately about the business and her enthusiasm for the product

While Sally Barnes’ husband spent time on the choppy Atlantic waters off West Cork making a living as a commercial fisherman, Sally who is originally from Scotland and a ‘blow in’ to the region, raised her family and started smoking fish in a tea chest.  This has since grown into a sustainable business and she is keen to share her experience and skills with others. Students often stay in her house, just outside Skibbereen, so they can learn the art of smoking, but she also holds a one-day workshop where she teaches a steady stream of food-enthusiasts this craft.

On a late summer afternoon we slowly make our way up a bóithrín that is thick with a mist that has descended from the nearby Atlantic. We are taking one of Barnes’s day-long workshops and are excited at the prospect of getting our hands dirty, gutting and smoking some of the finest produce the Haven Coast has to offer.

As we set to work, cranking up smoking machines and laying out whole glistening fish, Barnes talks passionately about the business and her enthusiasm for the product.

She starts off by showing us the best way to get to the spine of the fish, a surprisingly arduous task. It’s a little disconcerting, removing the head of a dead fish. Next to salting, a process that takes 15 minutes, and as we wait Barnes meticulously cleans her work space and shows us the tags from each salmon caught; which must be kept as proof of the fish’s providence. Our haddock are then smoked for ten hours and will later be vacuum-packed and sent to us by post. Barnes offers us a simple Scottish recipe for the haddock, Cullen Skink, a sort of thick creamy soup that will go down very well over the winter months.

Last year, Barnes only managed to acquire 200 salmon. She resolutely refuses to work with farmed fish, and rightly so. The taste and appearance of these fish is incredible.

Before leaving, Barnes cooks some scrambled egg and we are deeply honored when she produces a side of her prized salmon, given its scarcity. She cuts it skilfully and we wash it down with mugs of tea and some anchovy and onion reduction on the side. This is West Cork hospitality at its finest and floating back to our accommodation in a food haze, we’re left wondering if we’ve just witnessed some kind of alchemist at work.

If something more active is what you’re after or you feel the need to burn off the thousands of calories you’re likely to consume while in West Cork, then the walking country around Baltimore is what you are after.

There is so much to see along this stretch of the Wild Atlantic Way, that experiencing it on foot will offer maximum exposure to the vast array of birds, animals and sea creatures that call this natural environment home. Walking in this wonderful elemental region is not just about embracing the magnificent beauty and nature that is all around you, it’s also a real tonic to help you let go of everything and feel as though you’re leaving the tribulations of daily life behind you.

Lough Hyne offers a lovely forest hill walk and on a good day the views of the roaring Atlantic will invigorate even the most jaded traveller.

The surroundings of Baltimore offer great year-round walking possibilities, but if a walking weekend is something you fancy, then a great time to visit is the weekend of October 6 - 8, when Rianne Smith will run guided tours, as part of a walking weekend in the area.

“Walkers can really appreciate the vistas, a little bit of history and they feel they can come back and do the walks independently at another time as well,” Smith says.

Lough Hyne offers a lovely forest hill walk and on a good day the views of the roaring Atlantic will invigorate even the most jaded traveller. A short boat ride from Baltimore to the islands of Sherkin or Cape Clear will open up endless walking possibilities too.

On recommendation, we plumped for a short hike from the harbour, past swathes of heather and gorse and up the coastline, towards Baltimore Beacon, a lighthouse built in 1849 and known locally as Lot’s Wife. Perched high above the Atlantic, we gazed out to Sherkin Island and Cape Clear and watched sea birds dip and soar past craggy rocks. Baltimore Beacon, a Signature Discovery Point on the Wild Atlantic Way, offers a 360-degree vantage point and the vista is likely to take your breath away, if the ascent does not.

From the Beacon, you may be able to spot some not-so-shy mammals frolicking close to shore, but if not then Cork Whale Watch offers a unique boating experience from Reen Pier in nearby Union Hall.

Colin Barnes has spent 50 years at sea, first as a commercial fisherman, and in his latter years as a whale guide. When in 2001 he decided to stop fishing and instead take people out to sea to look for whales, people looked at him “with pity in their eyes.”

“They thought I was going mad and asked me, are there any!?”

“People go to Iceland, Newfoundland and New Zealand to see these creatures but you can see the exact same here.” In fact there are three species of whales off the south coast, making this situation somewhat rare, according to Barnes.

Fin Whales, which are slightly smaller than Blue Whales, are the world’s second largest animal. Humpbacks have also been sighted, as well as Minke whales which are the most abundant here. The weather played havoc with our plans and a thick fog came down across land and sea, making a trip off shore a no go for us, but I spoke with several day trippers who have spotted many of these magnificent creatures.

A sighting is most likely three to 10 miles off-shore but Barnes says they often come right up to the shoreline.

“Fanatics, who have followed these creatures all over the world, say it’s some of the best whale watching they have seen right here on the Wild Atlantic Way, as not many places have all three species, as well as porpoises and dolphins. They come right up to the boat and show off. They’re a delight.”

It’s an activity suitable for all ages; Barnes has accommodated young children right up to a rather incapacitated gentleman of 102 years, so if you manage to avoid inclement weather then this is an experience worth grabbing.

Back on dry land, farm visits are becoming popular with several working farms coming together under the West Cork AgriTours umbrella, offering an interactive experience for all especially those living in built-up areas that might not normally get to see bovine up close. We stopped by Denis O’Donovon’s dairy farm just outside Glandore and he is keen to tell his story. He says bringing groups to his farm is as much about the interaction for him as it is about highlighting the excellence of his product.

“I’ve always been adamant we have a fantastic product; we do some of the best grass-fed milk and cheese in the world.”

O’Donovon can cater for groups of 10 or 15, who will be transported to the heart of the farm by tractor and trailer, an experience that looks quite thrilling, as it’s a bumpy ride through hilly fields, even in O’Donovan’s sturdy Landrover.

His stunning Fresian/Jersey cross breeds are a mix not often seen and it gives these ungulates a beautiful black/brown colouring. From where his cattle pasture, the views of the West Cork landscape are haunting. A treat is in store as a break in the drizzle offers up a castle-like structure, nestled into lush greenery. O’Donovan’s fields provide one of the best views of Coppinger’s Court, a ruined four-storey fortified house dating from 1616. We exhaled a breath and gave thanks that a brief clearing of the fog allowed us that special sighting.

Back at the farmhouse mugs of hot tea and scones await and O’Donovan explains that this endeavour is about reconnecting people with where their food is coming from.

This is all about sustainable dairy and O’Donovan shocks with a simple fact. In California it takes 44 litres of water to make a litre of milk - here it takes seven.

O’Donovan’s milk goes to the Carberry Group which makes Dubliner cheese and he says their trump card is taste and quality. We sample some and chat to his wife and son, who are keen to provide a proper Irish welcome to whoever comes.

Before we leave, O’Donovan is eager to show us the Drombeg Stone Circle, which is not far from his farm. Ireland’s answer to Stonehenge, it is one of the most visited megalithic sites in Ireland, and this was the perfect end to a short stay on the Haven Coast.

While this part of Ireland is about dramatic landscapes, seascapes and magnificent vistas, it is also about its people. The people who love their local area keep this community alive. They offer an insight into their part of the Wild Atlantic Way by opening their doors to those who visit and offering them first-hand, authentic experiences that would otherwise be hard to come by.