Food traditions that have been carried out for centuries remain strong along the Wild Atlantic Way, creating another exciting reason to visit 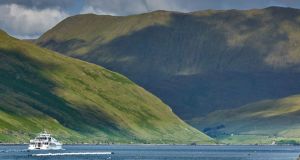 Take a trip along the Wild Atlantic Way and you will find pure, cold waters, rugged powerful mountains and rivers singing with energy; which all influence the taste and the quality of its spectacular food. Meeting the people who produce that food is a great experience too that will reveal more of the magic of this incredible route.

The Wild Atlantic Way borders some of the coldest waters in the world, producing a delicious bounty of fish and shellfish while sheep graze on high, heathery mountains and creamy butter and cheeses are produced from the rich, lush grass cows graze upon. There are passionate, hard-working farmers and food producers threaded into this coastal tapestry supplying local shops, cafés and restaurants and offering visits to their farms and homes to share the story of their food and products with visitors.

Food traditions that have been carried out for centuries remain strong along the Wild Atlantic Way, and there is something very special about the culinary delights and food experiences available; from food festivals to tasting events to getting your wellies on by the shore to collect shellfish or forage seaweed.

Áine Maguire runs The Idle Wall in Westport, Co Mayo and speaks with passion and pride for the local Wild Atlantic Way producers who supply her kitchen.

“This is most definitely an Irish restaurant with Irish food, and Irish food has always been an interest of mine. The Wild Atlantic Way is such an unspoiled part of the world, the water is so clean. We have oysters, scallops, clams and mussels on our doorstep. Slowly, people are beginning to realise the beauty and the quality and the wealth of produce that we have here. The last thing you want to see as a tourist is to go into a pub in Westport and find Tiger prawns on the menu.”

“There are some really great things happening here like the farm that produces Velvet Cloud - they make sheep’s milk yoghurt and have started making a cheese which is extraordinary. I almost had to sit down when I tried it. All our lamb is from here, it is amazing.”

We want people to have an authentic experience

Maguire cites her proximity to the sea as the reason she gets all her fish and shellfish in peak condition. “I have oysters that are picked that morning that are cooked that evening, I have fish that comes in that was caught the night before or picked up that morning. It is that freshness that makes the difference - you can’t get that in other places. For example, the person who brings my oysters, he comes back every three days and takes the ones that I haven’t sold and puts them back in the ocean and replaces them for me. I only have that because of my proximity to this beautiful clean water.”

Maguire also runs food tours where you can meet local producers, including seeing where wild mussels get collected. She says that you can get a truly authentic, interactive experience on the Wild Atlantic Way with food. “I think any place where you have small producers makes it a unique food destination. You can meet these producers who are working so hard and they are so passionate and so knowledgeable.”

“We want people to have an authentic experience. Something that is real and that they really see this beautiful landscape that is very rich in food.”

Anthony Gray is chair of the Sligo Food Trail and says he wanted to connect and show off the best of local Sligo produce with their food tours. “We have great artisan produce - shellfish, fantastic dairy and with our stunning location on the Wild Atlantic Way, we have so many things to offer. I want to showcase that to tourists and also to Sligo people.”

Ireland is one of the finest food destinations in the world, we just have to tell our story better

Gray says the focus of his own restaurants, Trá Bán in Strandhill and Éala Bán in Sligo Town, is on local and fresh ingredients. The north west Atlantic has some of the coldest waters in the world and produces a high yield of fresh fish from salmon to lobster to crab.

“Sligo is Sligeach in Irish, which comes from the Gaeilge word ‘shell’ and we pride ourselves on the fantastic shellfish that we have here in Sligo. Ireland is renowned for its fresh fish and we don’t push ourselves enough when it comes to the amazing seafood that we have. It’s the best in the world.”

Gray hopes that the future of food along the Wild Atlantic Way will see more restaurants seek out local producers, and name them on their menus. “When people start explaining to consumers where the product is from, everyone benefits. I see my customer’s eyes light up when I tell them that I was out at the market buying edible flowers or where my cheese is from and who makes my bread. If we all do that we are on the right track to showcase, not just Sligo, but Ireland as a food destination. Ireland is one of the finest food destinations in the world, we just have to tell our story better,” Gray says.

One of the jewels in the Irish food crown is the coveted and mysterious oyster and the North Atlantic waters are world renowned for its oyster’s purity and its clean, fresh taste. Frank Carter from the Wild Atlantic Oyster Company, which represents three oyster producers and a hatchery in Sligo Bay, says that their unique waters and long history of oyster farming illustrate that there have been perfect conditions along the coast for centuries to allow oysters to thrive.

“There was a very long tradition of oyster farming in Sligo Bay. On the Lissadell Estate where the Gore-Booths were landlords, they actually cultivated oysters and were exporting to the London market where, apparently, even today the term ‘Lissadell oyster’ has some resonance in some restaurants,” says Carter.

“When something grows in a colder climate or conditions, it develops more slowly and it has a stronger quality of product. That’s not just unique to Sligo, the waters would be at similar temperature in all bays along the west coast.”

While everyone has their wish list of activities while on holiday, what everyone does have in common is that they will want to eat and the Wild Atlantic Way offers a very accessible, enjoyable variety of food experiences to get the true taste of the Atlantic. “Even though oysters have a mystique about them, they are very available and very accessible as a great food experience on the Wild Atlantic Way,” says Carter.

Sinead O’Brien created the Mungo Murphy's Seaweed Co to compliment her mother’s land-based Abalone shellfish farm in Galway. “As a teenager we were always dragged down to the beach to get seaweed to feed the Abalone. I studied for a year in Amsterdam and while I was there I felt quite landlocked and really missed the Atlantic. When I got home I suddenly saw seaweed in a new light and started experimenting with kelp, and then with the other types - sea spaghetti, dillisk and Carrageen moss.”

La Rousse food suppliers now distribute her produce, which is harvested in Ros a Mhíl, to some of the country’s top restaurants. She also supplies beauty products, dried seaweed conveniently packaged together so you can add it to your bath without the mess. “You can squeeze the oils out of it and it is a lot cleaner as it doesn’t leave the seaweed all over your bath.”

O’Brien says that people can be nervous of trying seaweed because of the misconceptions about it.

It is like a flavour enhancer, which the Japanese would call Umami

“Traditionally, seaweed was used as a fertiliser on soil or to feed to animals. There would really only have been dillisk and Carrageen moss that would have been eaten. As far as I’m aware, nobody really ate others like kelp or sea spaghetti. I think Irish people never really saw seaweed as a food because it would have been seen as a bit of a poverty food.”

O’Brien says that her seaweed products really draw out the flavours of the other ingredients you use when you cook with it. “It is like a flavour enhancer, which the Japanese would call Umami. I have never found it to be salty. Once you soak it for 10 minutes in fresh water, that washes off the salt so it just adds a really fresh flavour to your cooking.”

O’Brien says that most people think of seaweed as being synonymous with Japanese cuisine as dried nori seaweed is used for sushi. “The way it is served in Ireland is fresher, with the likes of the sea lettuce or the dillisk. You can eat those in a salad or in a broth in its freshest form which is a unique experience.”

There is a heavenly larder of food to experience all along the Wild Atlantic Way, from cheese, to honey, shellfish, fruit, vegetables, beef and lamb, craft beers and whiskey. “We take it for granted every day, but international tourists don’t really know what we have on our doorsteps. People want the rugged, raw experience and that’s what we have here; absolute raw beauty and wildness. You will see real Ireland and have a fresh food experience on the food trail, or anywhere  the Wild Atlantic Way,” says Gray.

Wholly influenced by landscape and sea, the food producers of the Wild Atlantic Way use the waters, air, pastures and even the salt of their surrounds to create tastes unique to the west coast of Ireland.

Embrace the Wild Atlantic Way of Life and plan your trip here: www.http://www.wildatlanticway.com/explore-the-route