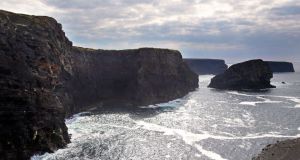 The cliffs of the Loop Head Peninsula in Co Clare summon up the spirit of the Wild Atlantic Way in an incredible way. Rugged, wild and full of adventure, they mark a territory on this great touring route that is more off the beaten track than other famous tourist destinations in this area. Autumn is the perfect time to see the true force of nature that is the ferocious Atlantic Ocean as it shapes and carves the coastline of the Cliff Coast.

Co Clare is a triumph, populated as it is with so many world-beating tourism destinations and rich cultural activities. One of the most famous tourism sights in the world, the Cliffs of Moher, dominate the coastline, while further inland the rocky Burren landscape captures the imagination of all that visit it. The towns and villages attract visitors year round with festivals and events that celebrate the county’s close association with traditional music, literature and wider Irish culture. People come for the landscape, the seaside towns, the gastronomy and the very rich character of local villages. With a completely different pace of life, the county really is a destination that communicates pride and confidence in its own identity.

But travel south of the Cliffs of Moher and you’ll find the Loop Head Peninsula, an exciting landscape carved from rock

But travel south of the Cliffs of Moher and you’ll find the Loop Head Peninsula, an exciting landscape carved from rock by the Atlantic Ocean on one side and the force of Ireland’s greatest river, the Shannon, on the other. It captures in its landscape all that is exciting and real about the Wild Atlantic Way and deserves to be experienced.

Tourism isn’t new here – it has been attracting generations of beachgoers since the 1700s and the horseshoe bay at the town of Kilkee is a great starting point to explore the region, with its Victorian seafront, blue-flag beach and natural swimming pools known as the Pollock Holes. Walk to the west end of the town and you’ll rise upwards to the Kilkee Cliffs. This is a wonderful cliff walk that brings you face-to-face with nature and reveals the sea architecture that defines the peninsula.

Sea stacks, caves and swimming areas abound, but locals will speak most warmly about the Pollock Holes. These three large natural rock pools appear at low tide and create a safe but exciting place to swim on the edge of the Wild Atlantic Way. It’s a truly unique experience and will guarantee you a chance to slow down and taste life like a local. Indeed, to find them we just followed a group of locals en route to their daily swim.

Watersports are a big part of what Kilkee has to offer and being led through caves and rock pools and along the waterline is a thrilling way to explore this rocky coastline and really immerse yourself in this beautiful area. Kayaking, coasteering and paddle boarding are all on offer and bring an element of adventure to experiencing the coastline here that is hard to beat.

The route of the Wild Atlantic Way loops the entire peninsula and the Kilkee Cliff Walk is a part of that. We took the eight kilometre option but the shorter five-kilometre route is just as dramatic. As you walk you’ll see Bishop’s Island ahead – the first major sea stack along the route. Formed by sea  erosion, sea stacks are a distinctive feature of the Irish coastline and rise out of the water in a steep vertical column of rock. The Bishop’s Island stack, cut off from the mainland for over a thousand years, still has the remains of a church and monastic beehive huts and casts a great sense of the power of the sea and the weight of history on the area.

On this part of the Wild Atlantic Way the Loop Head Heritage trail is unmissable. It was designed to open the peninsula to visitors and expose them to its culture, history and archaeology. In 2010 Loop Head won the Eden award, recognising it as a European Destination of Excellence, an experience that inspired the growth and development of a range of new tourism-related businesses, including walking and cycling companies, eco-camping and driving tours.

Loop Head is ideal to walk, drive or cycle. The roads are well maintained and there are specific sections marked for cycling. The route towards the tip of the peninsula, a must-see destination in itself, cuts through the landscape and its pasture land, bogs and woodland. You’ll pass castles and islands and really wonder at the pace of life here. It’s a place that commands you to slow down and you could spend days just wandering its lanes as you engage with the natural world in a very special way.

One of those lanes will bring you to the village of Carriagaholt, a Discovery Point along the Wild Atlantic Way and a beautifully situated village full of character and life. With great restaurants and traditional bars its identity is forever forged with the sea. One of its best-known attractions now is dolphin watching.

The Dolphin Watch boat is busy with excited guests as it pulls out of the harbour at Carrigaholt. The 15th century castle that the village was built around comes into view as we move out into the bay in search of dolphins. Where the mouth of the Shannon meets the Atlantic is a rich body of water, full of marine life and a permanent home to a pod of 200 bottlenose dolphins. It’s the largest resident group of bottlenose dolphins in Europe and the sighting rate is one of the highest in the world, says Sue Magee, who has been running tours here with her family for over 25 years.

At the heart of this tour is the desire to educate children and adults about the amazing marine life in this area and the crew of marine biologists onboard quickly bring the experience to life. To understand the story of the dolphins here, they explain, we need to understand what’s happening beneath the waves and the conditions above us. We learn about the sea birds overhead, how the landscape shapes the force of the tide and how this in turn creates channels within which the dolphins love to feed. We twist and turn to travel these channels in our quest for a sighting of these wild animals and begin to realise the huge importance of this wild environment, normally just beyond our reach.

We spend nearly three hours like this, chasing shadows and celebrating sightings en masse; Our hosts explaining and directing our view as we travel. It’s a real privilege and as we return to the land the fragility and power of the environment along this stretch of the Wild Atlantic Way is brought vividly to life.

The route of the Wild Atlantic Way brings us further then towards the Lighthouse and we cut down through the peninsula to Kilbaha, the last village on the peninsula

The route of the Wild Atlantic Way brings us further then towards the Lighthouse and we cut down through the peninsula to Kilbaha, the last village on the peninsula. It’s in an incredible setting, looking out on the Shannon and across to Mount Brandon.  Its pier reflects the lives of the generations of fishermen and women who have lived here and the simplicity of the life on offer. It’s a place that inspires great culture.

A visit to the Kilbaha Arts, Craft and Gallery just outside the village reflects this beautifully and is a fantastic way to meet people from the local community. When we arrive it is thronged with local cyclists buzzing with the adrenaline rush of the road and eager for a coffee and a chat in this great location.

It’s a pit-stop to beat most with a great family-run gift shop and gallery that captures the essence of the area in art. We receive incredible tips on destinations like the Bridges of Ross, a single surviving sea arch that looks out to the Atlantic that once carved it from the rock. It’s also a very popular bird watching site, we learn, regarded by many as one of the most important in Europe.

In the evening, we are told, flocks of migratory sea birds gather here on their southbound migration and standing on these huge rock formations as they fly overhead allows you to understand the powerful feelings they evoke for local people. The sound, the spectacle and the wild life that they lead are all synonymous with the coastal experience and this is echoed in our own experience of the Wild Atlantic Way of life.

The winding road from the Bridge of the Rosses to the tip of the peninsula is another beautiful journey offering more sea vistas and cliff views. Farmland opens before us and the roads are bursting with colour from the wild flowers in the hedgerows. We pause to properly experience the solitude around us and reflect on the sense of calm it evokes before making our way to our ultimate destination at the tip of this dramatic peninsula.

While many places claim to be at “the end of the world”, few would contest that the tip of the Loop Head Peninsula deserves to hold that crown. It’s a wild and beautiful place, whipped and shaped over centuries by the Atlantic Ocean and the wind. A lighthouse has stood guard here since 1670, a testament to the power of the waters that meet where the Shannon River and the Atlantic Ocean converge.

It’s a place of incredible drama with never-ending views and it’s easy to imagine spending nights in the Lighthouse Keeper’s house which has now been converted into holiday accommodation. It might be around four kilometres to the nearest shop or bar but the remoteness of this location is its true value.

Looking back along the cliffs your eye is drawn up the coast as far as the Cliffs of Moher themselves and there’s an incredible feeling of connection between that place and this. In truth they are one and the same geological marvel, running the length of Co Clare, and there’s a great satisfaction in seeing them and having journeyed from there to this remote spot. In front of us the plunging cliffs of the Diarmuid and Gráinne sea stack push the drama higher as the tales of this so-called Lovers Leap unfold.

It’s a place steeped in mythology and meaning and allows the true personality of this section of the Wild Atlantic Way to be exposed. It’s a place apart and one that should be celebrated for its dramatic beauty but also for its incredible sense of calm, a feeling that we carry with us long after we have left it.

Find out more about the Cliff Coast