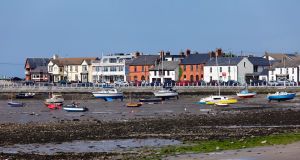 Dublin has a lot to offer the first-time buyer. It has all the cultural amenities of a big city, but its boutique scale means that areas within it feel more like urban villages than a sprawling metropolis. Photograph: Getty Images

On Thursday, September 12th, The Irish Times will host a first-time buyers' event in association with Ulster Bank, in Bewley’s Café, Grafton Street, Dublin, designed to help buyers in the city and county get on the housing ladder.
As well as the chance to meet Ulster Bank mortgage specialists face-to-face, attendees will hear from a panel of speakers including: architect Peter Crowley of award-winning practice PAC Studio and judge on RTÉ’s Home of The Year, who will highlight what to look out for when choosing a new home; Ryan Coyle, property specialist at MyHome.ie, who has up-to-the-minute insight on the current housing market; Ulster Bank Dublin area manager Brian Durnan will discuss the overall mortgage application process and give some tips and tricks on how to streamline the process: while interiors and DIY blogger Katrina Carroll of @ vintageirishkat will discuss how to put your unique stamp on your new home, within the confines of a small budget.
[To attend the event in Dublin for first-time buyers,  register your interest here]
The event will be MCed by architect Hugh Wallace, best known for his roles as a judge on RTÉ’s Home of the Year and the host of The Great House Revival.
Affordability is the biggest factor affecting the first-time buyer market, says Angela Keegan, managing director of MyHome.ie. “The central bank rules, coupled with a mortgage cap at 90 per cent for this sector, is seeing buyers in the capital move to Dublin’s outer suburbs and outskirts.”
The most popular price point for first-time buyers is between €250,000 and €300,000, says Keegan, with the single most important factor when purchasing being location. Sales in Dublin 15, Dublin 18 and Dublin 24 are thriving and it is new home sales that is driving those markets, Keegan says.
“First-time buyers are buying homes rather than apartments, mainly because there is a much better selection within the new homes market.”

Transport links also matter, says Colm Byrne, director of new homes at SherryFitzGerald. “Traffic volumes are increasing and time-poor workers don’t want to spend their free time sitting in their cars. Being close to a train or tram lines is a priority for them".
Some developments are literally across the road from a Luas stop and these have proved to be magnets for first-time buyers: Clay Farm in Leopardstown is one example, while City West is just a 40-minute commute from town via the Luas red line. In these and similarly well located developments first-time buyers have snapped up as much as 90 per cent of the homes, says Byrne.
"Dublin has the big city status but it actually feels far smaller because we’ve kept the village feel of our neighbourhoods. "Buyers can have the best of both worlds", says Graeme McQueen, head of communications at Dublin Chamber. He cites Ranelagh, Phibsborough and Clontarf, in particular, as having very much a village vibe.
While all are established neighbourhoods, the city’s newer villages, like Adamstown and Cherrywood, offer regular transit services as well as a central hub, and that is attractive to home hunters, says Byrne.
It’s what he calls ‘the two-pint principle’. “They want to be able to walk to a local shop to buy a pint of milk and to be able to walk to the pub to meet friends for a pint.”
Dublin-born buyers looking to start a family want to live close to the areas where they grew up, says Gina Kennedy, new homes director at estate agents DNG, but they are prepared to move that bit further out too. She says that home hunters from suburbs such as Rathfarnham, Knocklyon and Ballinteer, for example, are looking beyond these neighbourhoods to areas like Ballycullen and Kiltipper in Dublin 24 - areas that are still close to schools and shops and recreation facilities, but that are a bit more affordable.

You can access Dublin city centre and get beyond the city limits surprisingly quickly, which offers a great work-life balance

The fact that prices have settled somewhat in the capital is good news for buyers. The median asking price for a home in Dublin now stands at €382,000, according to the latest MyHome.ie Property Report for Q2 of 2019. While this is up half a per cent in the quarter, it is down 0.6 per cent year on year which means asking price inflation is now negative, at its lowest level for five years.
House hunting a bit further out of town makes sense from a lifestyle and budget point of view. "You can access Dublin city centre and get beyond the city limits surprisingly quickly, which offers a great work-life balance, says McQueen. “You can be on a golf course, up the hills and on mountains or on the sea within 30 minutes of hitting the M50.”
Television producer Donna Higgins recently moved back to Dublin from London. She loves the city’s scale and “the fact that you can walk everywhere.” “There’s a cosmopolitan buzz to it, the people are friendly and nobody takes themselves too seriously,” she says.
You can get out of the city easily too. “I like to go for walks around Howth Head and have easy access to the countryside and the west of Ireland, where my family is.”
“If you surf you can be on some of the best waves in Europe in two-and-a-half to three hours from Dublin,” adds McQueen.

There’s been a national increase in employment levels in the year to quarter one of 2019, of over 3.5 per cent, according to recent CSO figures, and Dublin’s economy is booming, according to the 17th edition of the Dublin Economic Monitor, which notes employment at record levels. A total of 25,000 people were added to the labour force in 2018 with more than 700,000 in work, in the fourth quarter of 2018. Unemployment was at 4.9 per cent, its lowest rate since the fourth quarter of 2007.

The environment for buyers is becoming much more favourable, with an increasing number of homes listed for sale

The latest MyHome.ie Property Report for quarter two of 2019 shows that the most popular searched areas in the capital this year are; Clontarf, Malahide, Howth, Blackrock, Dalkey, Sutton, Skerries and Raheny, Lucan and Swords – many of which are close to the sea, bar Lucan and Swords, which are both near to the airport, where you can fly to over 150 destinations, another crucial selling point to buyers from overseas or returning emigrants, says Sherry FitzGerald's Colm Byrne.
Housing supply and market liquidity is also gradually improving. “The environment for buyers is becoming much more favourable, with an increasing number of homes listed for sale. Nationwide this figure is up 4.5 per cent, but the improvement is especially marked in Dublin, with 5,400 homes listed for sale on MyHome.ie – up 9 per cent on last year,” Keegan says.
“Starter home prices are increasingly steadily but overall the market is flat. The fact that we are seeing more transactions, more properties on the market and more sustainable price increases were all positives for prospective buyers,” Keegan says.

To attend the event in Dublin for first-time buyers on September 12th, register your interest here.

Ulster Bank Ireland DAC is regulated by the Central Bank of Ireland.