‘I’m still taking it 20 years on and loving it’

Triathlon athlete Trevor Woods has been taking Udo’s Oil as part of every meal since it was launched in this country 20 years ago and says his skin, immune system and energy levels are much better as a result 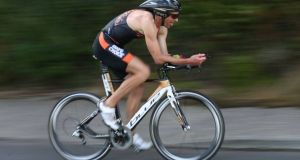 Trevor Woods uses Udo’s Oil as part of every meal. 'I love it, I find it enhances the flavour and texture of the meal.' Photograph: Triathlon Ireland

For someone who didn’t know how to swim until he was in his late teens, high performance athlete Trevor Woods has done pretty well for himself. The Tyrone native is one of the country’s most successful triathletes and has been competing at a competitive level in triathlon since 1989. He works as an exercise physiologist in University College Cork and has won numerous national titles ranging from sprint to half-Ironman distance, as well as several national series titles. He has won medals at World and European triathlon championships, and is a former holder of the Irish Ironman record with a time of nine hours and 18 minutes. On top of that, he also competes in cross-country, mountain biking, bike racing and swim events. A busy chap.

Nutrition and maintaining his health is stitched into Woods’ daily routine of priorities and as Udo’s Oil celebrate their 20 year anniversary in Ireland this year, he cites it as an essential part of his everyday diet. He has been an ambassador and a fan for those 20 years for its skin, joint and heart benefits.

“Twenty years ago, I heard about Udo’s Oil when it launched. At that stage actually I was at a good level of sport and was looking for sponsorship. I wrote to the Udo’s Oil distributor and they came back with a positive response. I had tried the product and I genuinely liked it straight away. I’m happy to say, I’m still taking it (20 years on), still loving it (and its benefits) and integrating it into my daily nutrition, as does my wife and seven-year-old daughter,” said Woods.

The certified organic Udo’s Oil is Ireland’s top selling seed oil blend formulated to a 2:1:1 ratio of Omega 3, 6 and 9 fatty acids. It is the richest vegetarian source of Omega acids available in Ireland. These essential fatty acids play a vital role in skin, joint, brain and heart health to make you look and feel your best, inside and out. Many fans comment on the “glow” it gives their skin. It contains flax seed oil, sunflower seed oil, sesame seed oil, coconut oil, evening primrose oil, soy lecithin, rice bran and oat bran germ oils and mixed tocopherols. It has a mild nutty flavour and can be drizzled over meals and snacks. There is also a capsule form available.

There are lots of ways to incorporate Udo’s Oil into your daily meals. You can use it to make your salad dressings or drizzle it into smoothies, soups, casseroles, porridge, pasta dishes, mashed or baked potatoes and protein shakes.

The creator of Udo’s Oil, Dr Udo Erasmus, says that of all the countries Udo’s Oil is sold in, per capita, Ireland is the winner and has been consistently. “It’s a pretty remarkable accomplishment. The people who are using it care enough to include it in their diet because they actually invest in their health, to them I would say “Congratulations.” My hope would be that by the end of the next 20 years there will be a bottle of the oil in everybody’s’ fridge in Ireland,” said Erasmus.

Erasmus began the journey of creating the oil, because of his own health problems. “This all started because I got poisoned by pesticides and doctors couldn’t help me so I was left to my own devices. I have a background in biological science, biochemistry and genetics so I looked through journals to find out how to get myself better and got stuck on oils because I found out how much damage is done to our cooking oils by industrial processing and how much further damage is done when we use them for cooking our foods,” said Erasmus.

Erasmus found that oils are our most sensitive nutrient and are damaged by light, oxygen and very rapidly when they are heated. “They need the most care and we actually treat them with the least care of any nutrient we have. More physical health problems come from damaged oil than any other part of nutrition and when we don’t damage the oils, and make them with health in mind, then more physical health benefits come from oils than any other part of nutrition,” said Erasmus.

Minimal heat is involved in the pressing for Udo’s Oil, no enzymes are destroyed and it is not pasteurised. Udo’s Oil can be added to warm food but it is not advisable to cook with, as high temperatures destroy the delicate essential fatty acids.

Erasmus made the blend to get the ratio between Omega 3 and 6 just right. “I took the nine things that I felt would do the most good and then put them together in the right ratio, making them with health in mind by putting them in brown glass, keeping them refrigerated, putting them in a box to keep the light out,” said Erasmus.

“Mix it in your favourite foods, it improves the absorption of the nutrients from those foods and you don’t get any aftertaste,” said Erasmus.

As well as research showing Omega 3 is good for cardiovascular health, the blend of Udo’s Oil is also great for joints, particularly important for athletes like Woods.

“The joints are the weakest parts of an athlete’s body. We did (a study* with strength athletes who took Udo’s Oil) and they reported consistently that their joints were more flexible and supple, they had less pain, less injury and greater mobility. They also had less inflammation and healed in a third to a half the time it usually takes,” said Erasmus.

Woods uses Udo’s Oil as part of every meal. “I would find meals very boring without it. It is so versatile, it will go with anything. I would never cook with it because you’re altering the chemical structure of the oil. You could add some into a smoothie after training. I love it, I find it enhances the flavour and texture of the meal. The oil helps you to absorb the nutrients of a heathy meal,” said Woods.

Woods said the key noticeable differences he finds from Udo’s Oil are skin health, better energy levels and a healthier immune system. “I never really experience dry skin. Also, in general, since I have been taking the oil I would find that my immunity is better. I did have a tendency to get sick quite a lot and if I go off the oil for a while I would notice that change,” said Woods.

Woods would recommend Udo’s Oil not only for athletes, but for those who want to get fit and healthy. “It has a multitude of benefits for people who want to get physically fit and keep their fitness up. If you can improve the nutritional profile of your diet then, in theory, it will help everything from your immune system to your general energy levels and if you improve those things, then you can only expect your fitness to improve.”

Udo’s Oil is available exclusively from health stores, pharmacies and udoschoice.ie. Pick up your free 20th anniversary recipe booklet with every purchase.

*For details of this study please visit udoschoice.ie/fitness

Add Udo's Oil to your meals