Ben Gabriel and his son Joshua at their timber-framed house in south county Galway. 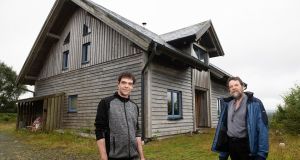 Ben Gabriel and his son Joshua outside the timber-framed home they built in their workshop, in south county Galway. Photograph: Andrew Downes

When furniture designer Ben Gabriel decided to create and build his own home in south county Galway, overlooking Slieve Aughty and the Burren, there was only ever going to be one material used – wood.

His timber framed house, which sits between Portumna, Loughrea and Gort, took seven years to build, but that’s only because he tackled it in the same way he does his furniture commissions, with a lot of thought and planning.

“The timber gives the house instant character that you wouldn’t get with a new concrete build; they take years to get that character,” he says.

Gabriel and his son Joshua, who joined his father in business in 2011, work seamlessly together in a workshop that’s located 100 yards from the family home.

Born and raised in Rotterdam in the Netherlands, Ben moved to Ireland in 1996, when he finally decided he wanted to “set down roots”. “I moved a lot as a kid, more than six times. I didn’t want that for my children,” he says.

“I had an idea of staying here, so when I got a chance to buy this land, I decided it was a good opportunity to build a house. I wouldn’t have dreamed of doing it in Holland, it would be very expensive. I designed the house, brought it to an architect, he drew it up and put it in for planning. I was involved in every aspect of the process,” he says.

While Ben carried out the majority of the work on the house (the roof was cut out and constructed in Austria), the family lived on the land in a cabin with a mobile home attached.

A primary reason for both going into furniture design is the sense of freedom it allows them.

“We work from home and often we spend way more hours working and creating than if we were employed. But we get to come up to the house for lunch and sit looking at that view,” Ben says.

Living in close proximity to such other-worldly landscape offers inspiration, but only in an indirect sense, Ben says.

“It puts you in a frame of mind that allows you come up with the designs. You need to be comfortable and relaxed to allow the creative juices flow. You feel the freedom that we have here. Many would draw from architecture but to say it inspires me to do pieces, no.”

Home gives them both a feeling of belonging. “When you travel, you get to see lots of different places but to know that there’s your version of home somewhere in the world, everyone needs to have that. It gives you security and grounding,” Joshua says.

Ben agrees that everyone is entitled to a home, “a roof over their heads”.

“Home gives comfort and gives me comfort, more than in just the physical sense,” he says. “The view now is nothing like it was. To watch it develop, and grow, locks it in even more. I have built up a history with the place, and being in Ireland for 23 years, it’s the longest I’ve been anywhere.”