In the fourth in the Ulster Bank series, we meet designer Bernie Murphy, whose ‘Homelands’ collection emerges from the landscape around her

Bernie Murphy: “I think just being here, living in Buncrana, there is a great sense of community and encouragement.” 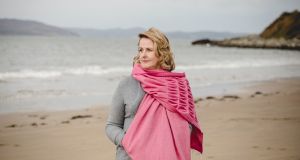 Bernie Murphy: “Home, to me, is a sense of place, where you belong. I belong to Donegal.” Photographs: Declan Devlin

Home means everything to textile artist Bernie Murphy. Based in Porthaw Glen, Buncrana, in her native Donegal, she skilfully intersperses world-renowned Donegal tweed with her own striking, contemporary style. She radiates pride when it comes to speaking about Donegal and has translated the inflections of her surrounding landscape in the capes, collars, tunics, trouser skirts, hats and scarves she designs.

Her studio is based at her home, which is just minutes’ walk from picturesque Porthaw beach. She takes walks there daily to gain inspiration, to recharge and simply to enjoy the joyful bonus of living by the ocean. In fact, she is so influenced by her homeland that she called her first collection exactly that.

“I called my collection ‘Homelands’ because I thought it was very relevant to who I am, where I am and actually each piece within the collection I have named for the townlands and places that have a meaning to me. ‘Magherabeg’ was a childhood place where I had lots of fun playing with friends when we were growing up. ‘Aileach’ is the Grianán of Aileach [a hillfort in Donegal]. So everything has a name and a sense of place of where I am and where I live, and it’s my home,” says Murphy.

Each of her pieces is handmade to order and made with Donegal tweeds and yarns from her Buncrana studio. Despite its rainy climate and harsh winters, sheep prosper in Donegal and the county has been producing world-famous handwoven tweed from local wool for centuries. Murphy manipulates this tweed with her stitching in a beautiful, distinguishing way which has gained her much acclaim. Her love of textiles began with her mother and grandmother.

“My grandmother on my father’s side taught me how to knit and she actually took us to the local shop here in Buncrana to buy me and my older sister our first set of knitting needles.”

Her mother’s sewing machine soon became so popular with Bernie, her mother let her keep it for herself. She made doll’s clothes and, eventually, her own clothes. “I always loved making and doing something different so that’s probably where my passion for textiles and design came about, initially.”

After completing a Fás course in Dublin in pattern-drafting and cutting-room skills in 1984, Murphy returned to Buncrana to work as a garment technologist with McCarter’s, before it eventually merged with American clothing manufacturer Fruit of the Loom. Murphy worked with Fruit of the Loom in product development for 21 years.

“WP McCarter’s were a family-run business and in the early 1980s, like everything else, business wasn’t good so they merged with Fruit of the Loom. I wouldn’t have my home here in Buncrana only because of Fruit of the Loom. The wages that we got were just phenomenal, even at that time. It was a great opportunity to be able to work in your own hometown. In the early 1980s, people just left to go away.”

Then, unfortunately, the company went offshore in 2006 and Murphy was made redundant. A mother of two, she found inspiration for her next career move from her daughter.

“My daughter was at NCAD at the time. She was coming home every weekend with little bits and pieces of embroidery and stuff to do and I thought, ‘Let’s explore my creative side’. I saw my redundancy as being an opportunity and I took full advantage of it. So I went into the North West Regional College.”

While she initially started with interior design, she realised the straight lines and computer-aided design were not for her. While doing a critical study, one of Murphy’s tutors spotted how fascinated she was with fashion and textile. She suggested she finish her higher certificate course, do a portfolio and she would give Murphy an interview. And she did. Murphy changed over and completed a higher diploma in fashion and textile design. “I went and did a top-up degree in fine and applied art and specialised in textile art [Ulster University]. I haven’t looked back since.”

When she finished her degree, she successfully applied for a part-time lecturer position at North West Regional College in Northern Ireland, where she lectures in fashion and textiles.

Initially, her “sculptural, wearable art pieces” with zips were very haute couture, very “out there”. And while they drew compliments, Murphy realised she needed assistance to turn her passion into a viable business.

“I did a course with the Local Enterprise Office and the Design and Crafts Council of Ireland, of which I’m a member, which was very informative. It gave you the opportunity to develop yourself, but within a business environment.”

Now operating successfully in Buncrana, Murphy employs people to assist her. One of her favourite things about her studio being within her home is being able to hear the ocean while she sews.

“My studio is actually a garage that is connected to the house. When Fruit of the Loom closed, I had the opportunity of buying some sewing machines so the garage slowly but surely became ‘Bernie’s space’, and then with being at college, it just evolved into my studio. Just the waves, the sounds, everything about living here in Porthaw Glen is home.”

She says the location of her house and studio were what sold it when the site was bought in the late 1980s. While she might change the dormer-style windows, which was the “fashion” at the time, she is happy to say that this is her “forever home”.

“In less than five minutes, you are actually at Ned’s Point and we have Fr Hegarty’s Rock walk. I have the best of both worlds now – I live in Buncrana, as a town, but I also live in the country. What was important to me in the design of our home was that it sat well within the environment, it wasn’t obtrusive. I’m happy with it, it serves me well, in that I made it my home. I think you can live anywhere, a tent on the shore green, as long as you make it your home, and everybody’s happy within it. That’s really what it’s all about.”

Murphy manages work-life balance, which can often blur when working from home, because she loves what she does so much. “Working from home, I don’t see it as work. I think it’s because I’m designing and making and it is part of who I am.”

Murphy’s parents live about 12 miles away and she beams when talking about how important their support is to her. “They are the best thing. My parents are very, very supportive of me, even at this age.”

She has also been moved by the support from her local community. “I think just being here, living in Buncrana, there is a great sense of community and encouragement. Anytime something would happen with my business, because of social media now, you meet people in the supermarket and they’ll stop and congratulate you.”

Murphy’s hope is that her pieces are considered timeless and cherished by those who receive them.

“I want to make pieces that have a heritage-style and that you could buy for your daughter or daughter in-law and then pass it down to the next generation. How would I like people to feel wearing one of my garments? Special.”

Murphy’s next collection is called “Belonging”. “Home, to me, is a sense of place, where you belong. I belong to Donegal, well, I feel this is a sense of place and that to wear one of my garments from my ‘Belonging’ collection can make you feel that you are part of something, that you belong to the heritage and style of Donegal. I think it’s just kind of a thread of my identity, of who I am, and sharing it with others.”