Dual-function transformer furniture designer, Orla Reynolds talks about her love of designing for small homes, in the fourth in the Story of Home series 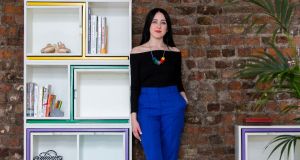 The twists and turns of Irish designer Orla Reynolds’ career have been nothing if not dramatic. Dancing from the age of four, the ballet dancer from Artane was selected at age 12 to join the Kirov ballet in Russia but decided to stay and train in Dublin, eventually winning a place at the Urdang Dance Academy in London.

Not yet finished school, it was a dream come true until out of nowhere she developed an injury that was so rare in dancers that it took four years to diagnose. “It’s usually an injury that male rugby players get so they didn’t even consider it. Only one other dancer in Ireland, a lead from Riverdance, has experienced it,” she explains. “By the time they had figured it out and I had undergone surgery to fix it, my chance at a dance career was over. It was a terrible time.”

Picking herself up she decided to study furniture design. “I needed something I could be passionate about. I was still in love with the stage and couldn’t imagine not working on it. I had an idea that through furniture design I could move into theatre set design, which would get me back to what I loved.”

The walls seemed to be the least-used part of the room, she says, so she set about trying to use them in a new way. She started with a bookcase but felt immediately that it was limited. “So I started thinking about each piece of furniture in terms of scene changes - how could I make a piece of furniture have more than one function. I could suddenly see the chairs and tables that a room needs integrated with its storage. It was a Eureka moment.”

From this, the Out of Nowhere range was born - a product range that she describes as dual-function transformer furniture. “There is a lot of multi-function furniture out there, but multi-function tends to mean that it operates one function at a time. My furniture can operate different functions at the same time and that suits how we all live,” she says, as she pulls four colourful dining chairs and a table from the skeleton of her bookcase. It’s a remarkable sight and one that has been entertaining people since she created it.

“I shot a short video to go with my thesis and it was picked up by an online design magazine called deezeen. It was amazing. The video went viral and suddenly we were getting orders from all over the world. The interest in Out of Nowhere was phenomenal and I wasn’t quite ready for it and wondered what on Earth am I going to do,” she says laughing.

Literally overnight she went from being almost-a-graduate to an already-launched designer with international orders. “The first thing we did was strengthen our patents. Then we set out on getting a licensing deal as I didn’t feel equipped to run manufacturing and distribution on that scale. I thought I could just be the designer.” Two years of negotiation were lost to this process but with such a steep learning curve she decided in 2014 that she would go it alone and she hasn’t looked back since.

The orders are still coming in from all over the world. Her biggest market is the US but she also ships to Australia, Singapore, Italy and beyond. “My customers tend to live in small spaces. They are usually professionals in apartments in major cities who are attracted to the look and feel of the bookcase but also to the way it fits into their lives. We also get quite a few art lovers who live in larger spaces and who say they are attracted to the feeling of Mondrian and Bauhaus in my work.”

She describes city life as an ideal for her and reflects on the experience of cities like New York where apartment living is common place. “My dream home is a tiny house. I think Irish people struggle with the idea of living in smaller spaces but I really like it. I don’t know where the idea came from that we need loads of space and then set about filling it with so much stuff.”

“We can have successful apartment living in Ireland but they have to be designed correctly. Storage is central to this. European apartment living always comes with additional storage and parking space. You don’t just get the square foot of the apartment. It’s a considered design approach and it works.”

The type of furniture we choose for our smaller homes matters too, she explains. “Very often people move into an apartment and then fill it with the same furniture they would have in a three-bed semi. It’s all too big and designed for a whole other kind of space. You have to choose your furniture differently to make it work.”

The most recent addition to her range is a striking table and stool set that is designed with apartments in mind. She wanted to create a piece that would be as functional and as surprising as her bookcase but stand out in its own right. She created a black and white table that has four stools built in that can be used in lots of different way. “I deliberately stripped it of colour so that it would be distinct in my range but also to give it its own identity. But I do love colour. It makes me happy and can be calming or exciting at the same time. We should use it more in our homes.”

Reynolds suggests that she’s sometimes shocked at the career path she’s ended up taking but at the same time she says she doesn’t see a huge difference between her dance career and her design career. “They both need discipline, the ability to deal with rejection, the strength to work through tough problems. I love designing for small homes. Our home is our base. It’s an anchor in life and we should create it in a way that reflects our dreams, our personal identity. I really love that I get to do that from here in my own home in Dublin.”

About the Story of Home series

The Story of Home is a six-part weekly editorial series that explores the idea of home through the eyes and work of six inspiring Irish designers.

We are all writing our own Story of Home and, to help inspire you, we’ve turned to a group of people who have made design for the home the core of what they do. “At Ulster Bank, we want to be a part of the journey you take in making your home your own– whether it’s a big or small property,” says Ulster Bank mobile mortgage manager Peadar Noonan.

“Apartment living is already a common first step on the housing ladder but many people are also choosing smaller homes for the longer term – particularly in cities. As Orla Reynolds explains, if the design is right they can make incredible homes.

“Overall, we want to make the home buying process as simple and as hassle free as you do.” One way Ulster Bank achieves this is through flexible opening hours.“We have branches open late on Thursdays and Saturday mornings. Our mobile mortgage managers can also meet you at a time and place that is most convenient for you,” Noonan says.

“We want to help your home plans come to fruition. We do this by providing a one-to-one service where the entire mortgage process is managed by one person all the way through from submitting an application to the draw down of funds.

“Buying your first home can be a stressful time so by making ourselves available to you we hope to help minimise that stress. “We’ll also ensure you always get the best rates, regardless of whether you are anew customer or an existing one. Building your story of home has never been simpler.”