In an age of big data, analytics and artificial intelligence (AI), relying on instinct, intuition or gut feel may seem like an inferior system when recruiting talent, but it may just be the edge you need to recruit the best 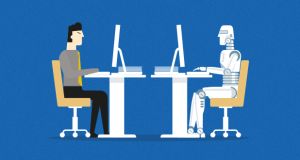 We live in the digital era. artificial intelligence (AI) guides our choice of restaurant, how we get there, and helps us get home later if we need a taxi. We talk about generations Y and Z as digital natives and organisations throughout the world are actively discussing their digital transformation strategies.

It is also having a profound impact on the workplace where everything can be measured and reduced to a series of ones and zeros, with a growing number of activities and processes previously carried out by people becoming automated in the drive to reduce costs and improve productivity.

But the digital world is not necessarily a better one. Faster and less prone to error certainly, but better is open to question. That is the central theme to be addressed by Sigmar’s upcoming Talent Summit 2020 which will discuss The Rise of Humanity in Work.

“Sustaining the impact of people and their wellbeing in the workplace, and our impact on the world, requires a resurgence of humanity in all we do,” says Sigmar CCO and Talent Summit founder, Robert Mac Giolla Phádraig.

“We look forward to hearing insights from Bob’s activism and humanitarianism, to gain a deeper understanding of how we can lead with more compassion and empathy.”

And hiring people who will thrive in a given workplace is equally important, according to Sigmar head of European recruitment, Shaun O’Shea. The Sigmar recruitment framework addresses three dimensions, he explains, competency fit, motivational fit, and culture and values fit. It has been tried and tested and proven its worth in successful candidate selection over the years, but it also acts as an indicator for the limitations of technology in the recruitment process.

“I have been in the recruitment business for eight years,” says O’Shea. “Eighteen months ago, we set up the largest technology recruitment hub in Europe here in the middle of Kerry. We lean quite a lot on technology tools, artificial intelligence (AI), machine learning, robotic process automation. I recruit for the technology sector, so I am very pro-technology, but you’ve got to build in human intelligence as well.”

Technology has its limitations, he explains. “When you hear people talking about new technologies, they say they are quicker, more accurate and better. They certainly can be quicker and more accurate but not necessarily better. They lack human instinct, that gut instinct. You can use technology quite a lot for the first two elements of our recruitment framework. You can search for competency matches and so on but there is no questionnaire, AI algorithm or chatbot which can tell if the candidate lives and breathes the values of your organisation.”

That’s where the interview comes in, when people can interact with each other to tell what they are really like. “People want to know what will happen when your backs are up against the wall, when the organisation is in dire straits, is the candidate a person who can be relied on to live and breathe its values. Technology is important, of course and we use all the latest tools. But we are combining technology with human instinct. We are using it to complement our own capabilities.”

No matter how advanced, technologies like AI and machine learning can be prone to the same errors as humans. “They are designed to do what a human or a group of humans will do but will never have human relationship skills and instincts,” he notes.

But they can also repeat the same mistakes as humans. In the US, when AI was used in an attempt to overcome unconscious bias in the recruitment process it was actually found to perpetuate it. This was because the algorithms use data on previously successful candidates to hire from the next bunch, thereby repeating and possibly amplifying the behaviour of its human predecessors.

Indeed, in 2018, Amazon ceased using AI assessment of CVs after it was found that the software was biased against those which include the term “women’s”, such as in “women’s team captain”. Again, this was due to trends in the dataset of previously successful candidates.

This is not the only reason to be cautious of an over-reliance on technology. Mistakes are costly, says O’Shea. “The Work Institute published research last year that showed that wrong hires are costing businesses around the world $600 million every year. The average employee in Europe now changes job every 12 months. We have to look at why people leave, and it’s usually because they are not a technical or motivational fit. It’s generally about culture.”

“Every organisation needs to hire the right people for them,” he continues. “Every hiring process should be unique, not off the shelf. Technology should be used as an enabler. It can be used for creating a long list of candidates and identifying a large talent pool. You need human input for short-listing and interviewing. If the recruiter works for the company, they will already know the culture. If it is an external recruiter, they will need to learn the client’s culture. I recently spent three days in Stockholm with a client learning their culture. Before that I was in Berlin and Barcelona.”

But culture can vary. “It can be different from country to country, office to office, and between sales and production and engineering. You have to understand it, if you are to hire candidates who will be the right cultural fit,” he says.

You can take the human out of the stone-age, but you can’t take the stone-age out of the human. Certain instincts are hard wired in us all, some in our self-interest; survival, fight or flight, reproduction and others which are altruistic; compassion, tribal instinct and a societal instinct

O'Shea concludes by pointing out that the human interaction at interview stage is now critically important to hiring the best people. “The economy is now at full employment and financial, accounting, and technology candidates can have five or six job offers at any one time. It’s a two way process now. Candidates are as much as interviewing the company as they are being interviewed. It’s now almost a question of them hiring the company.”

According to Mac Giolla Phádraig, instincts should also take centre stage when it comes to the hiring process. “You can take the human out of the stone-age, but you can’t take the stone-age out of the human. Certain instincts are hard wired in us all, some in our self-interest; survival, fight or flight, reproduction and others which are altruistic; compassion, tribal instinct and a societal instinct,” he says. Intuition is when you trust your instinct, which is often perceived as being 'fluffy' as a decision-making factor when used to recruit.

“We should not pit data against intuition, rather we should use our intuition to develop a hypothesis about a candidate and test that with the data in a experiential way at interview. After all, instincts are the fundamental drivers of how we behave and how we feel. I for one, would love to see a new recruit display, compassion towards my customers, tribal instincts towards my team and societal instinct towards the world at large. Use your instinct to hire for human instinct.”

Talent Summit 2020, the Rise of Humanity in Work: Ireland’s largest HR and leadership conference takes place on Wednesday, March 4th, in The Convention Centre Dublin. Get your ticket now