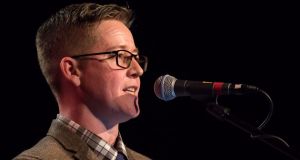 The very concept of the Dublin Fringe Festival is to spotlight theatrical ideas and shows that may not otherwise get the mainstream focus they deserve in performance slots throughout the year.

Smirnoff are supporting three shows in the festival, all of which aim to promote different elements that are a focus of the drinks brand’s attitude, and projects which aim for inclusivity through their performances.

The Fringe Festival and Smirnoff have shared views on promoting a society that is bold and brave, and furthermore inclusive of all minorities; and it is through this very concept of diversity that the marriage between the theatre festival and the drinks brand has come to pass. The Fringe Festival overall incorporates hundreds of performers and artists experimenting with their artistic styles, another goal which Smirnoff has as a brand and which makes the two operations such connected bedfellows.

Produced by Conflicted Theatre and Peter Power, Neon Western will be staged in the Samuel Beckett Theatre between 8-10 and 13-17 September.

Supported by the Arts Council and developed during an artist development programme and residency initiative of Cork Midsummer Festival, Neon Western tells the story of Neon John – described as an unwilling antihero in a fallen world. John’s story is set in the Soiled Dove saloon, a Wild West saloon where protagonists in the story drink, while others are hanged. Neon Western is billed as an immersive live experience, or theatrical warehouse rave, that marries theatre and rave to pull the audience into the heart of its story.

Smirnoff will combine with the show by providing cocktails during the performance that aim to bring the show to life. The Neon Mint Watermelon cocktail was developed after consultation between the show’s production team and a leading mixologist, with its watermelon and mint flavour designed to reflect the vibrant themes of the show.

Tomboy Survival Guide with Ivan Coyote at the Peacock Stag

Ivan Coyote’s live show aims to dismantle gender stories that society has formed and perform them as part-anthem and part-campfire story for the audience.

Coyote - a Canadian spoken-word performer, writer and LGBT advocate - along with an all-tomboy band, take the audience on a journey through the narrow halls of public washrooms.

Ivan Coyote’s live show will be performed on the Peacock Stage of the Abbey Theatre between 21-23 September.

The night before the opening of the Peacock performance, on 20 September, Coyote will also bring a once-off live event to The George bar. The Smirnoff Exchange with Ivan Coyote and Special Guests will be an hour-long live talk, which will bring to an Irish setting some of the conversations that Coyote will be having during the Peacock show. The night will take the format of a panel discussion that focuses on the role of music in queer activism. Coyote will also perform a selection of songs from the show on the night.

Smirnoff will be providing a selection of drinks during Coyote’s opening-night performance at the Peacock and also during the exchange at The George.

Homebeat and the Goethe Institute have teamed up to bring Edward Giegling’s live show to the Fringe and in doing so celebrate German rave culture in Ireland. Berlin-based DJ and producer, Giegling is known as one of the star attractions of Weimar’s Giegling Collective. The Fringe will mark his Irish debut when he will perform a three-hour live audiovisual set.

The show will take place at D-Light Studios in North Strand, Dublin 1. D-Light Studios is a warehouse and multimedia space housed in an old woollen mill in Dublin’s north inner-city. The venue hosts a wide variety of events including film and TV shoots, art exhibitions, product launches and yoga classes; on 15 September D-Light will be transformed into the home of Giegling’s live show. Irish DJ and producer Dreamcycles will provide support on the night.

During Giegling’s show Smirnoff will be providing the audience at D-Light Studios with a Blackberry Smash cocktail.