Bonded by blood and witchcraft: A Discovery of Witches

Sponsored by Sky One 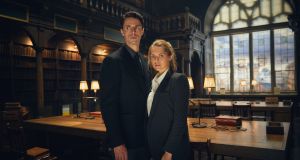 Soulmates? Matthew Goode and Teresa Palmer in A Discovery of Witches

If you like a side of romance with your fantasy, this new Sky Original Production will be right up your alley. Based on the All Souls trilogy of novels by Deborah Harkness, A Discovery of Witches sees a reluctant witch fall in love with a mysterious vampire. Yet the difference is that this non-traditional love story plays out in a world where witches, vampires and daemons secretly live and work alongside humans within modern society, all hidden in plain sight.

Teresa Palmer (Hacksaw Ridge) plays Diana Bishop, an Oxford historian who accidentally comes across an ancient manuscript in the Bodleian Library that plunges her into an enchanted world.

Helping her decipher the secrets of the manuscript is enigmatic geneticist and vampire Matthew Clairmont (Matthew Goode – Downton Abbey, The Crown), who is hiding some secrets of his own. As the two fall for each other, they must carefully navigate the tension developing between witches, vampires, daemons and humans.

All this is overseen by the Congregation, a shadowy institution made up of a handful of powerful vampire, witch and daemon representatives.

Spanning eight episodes, the series covers the events of the first book in Harkness’ bestselling trilogy. Visually it is stunning – the gothic architecture of Oxford provides a fitting backdrop for such an otherworldly tale. And while the supernatural element is to the fore, the characters never feel anything less than three-dimensional, with the story told in a way that is fun, clever, and makes for a really gripping yarn.

Above all, it is a love story built around the relationship between the smart,  independent Diana and the charismatic, vulnerable Matthew. The chemistry between Palmer and Goode is palpable as the series progresses and they slowly realise they are soulmates.

The character of Diana is the focal point of the show, and Palmer’s performance is mesmerising as the beautiful, dynamic and contrarian historian and alchemist, who reluctantly comes to accept her magical powers. “Diana is an incredibly powerful witch, and when we first meet her she is running away from her true self,” explains Palmer. “As the series progresses, you see her start to really embrace and embody her own spirit and she just grows so much.”

Palmer says Diana and Matthew are clearly meant to be together, despite a rocky start. “The first few meetings between them are probably my favourite, because there is this funny dynamic between them where he is really annoying to her and he is amused that he is annoying her. He is charismatic and handsome but there is something she can’t explain in words. She is drawn to him; they’re like two magnets for each other, it’s that really rare quality that you find in your soulmate. There are these twin flames that just have to be together.”

Goode agrees, saying that Matthew falls in love with Diana in spite of himself. “He has been training himself not to fall in love again but there is just something about her. When they first met there was a frisson between them. She, like him, does not judge other species. Her mind is also hugely important to him as it is what intrigues him.” Playing a vampire is undoubtedly something of a departure from the aristocratic roles Goode is known for. “He is an intriguing figure – that’s what attracted me to him,” he admits. “He’s mysterious and charming but at the same time he’s deadly. It’s a lot to play.”

Adapted for the screen by Kate Brooke, Goode says he soon realised that A Discovery of Witches is a fantasy tale with an edge. “It sounded like an incredible world to inhabit. I’d never played a vampire before and there is a kind of a dark mythology to it. The whole point of A Discovery of Witches was that it was going to turn that on its head, it’s more about his involvement with this human woman. So, it has a love story and notions about equality. It has a lot to say about the politics of our time.”

Palmer sums it up: “It is a fantasy love story, it’s dramatic, and funny, and adventurous. It’s enticing and sexy and inspiring.”

Alex Kingston plays Diana’s aunt, Sarah Bishop, a practising witch and coven member. The similarities between Sarah and Diana see them clash throughout the series.

Owen Teale is Peter Knox, a powerful witch and leading member of the Congregation and a complex, flawed, talented and rather charming character.

Louise Brealey plays Gillian Chamberlain, a witch and one of Diana’s fellow professors at Oxford University.

Lindsay Duncan is Matthew’s haughty and protective vampire mother Ysabeau, who is cold and aloof when she first meets Diana.

Elarica Johnson takes the part of Juliette Durand, a very old vampire, who is sexy and quite naughty. Her scenes in Venice where she acts on her blood lust are a highlight.

Greg McHugh plays daemon and Matthew’s mentor Hamish Osbourne, with their unconventional friendship a pleasure to watch. McHugh praises the originality of the characters. “They’re not the kind of immediately predicable fantasy vampires, daemons and witches you might expect.”

A Discovery of Witches is on Fridays from Sept 14th at 9pm on Sky One. For more information, click here.