Chernobyl: more than a historical drama, it's a cautionary tale for our times 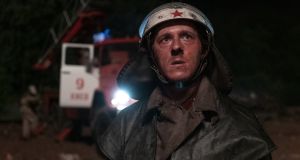 The Chernobyl disaster is etched in our collective memories, but the true story of the nuclear catastrophe, and the efforts to save the entire continent of Europe from its effects, have not been explored on screen until now.

The events of April 26th, 1986, the chaotic fallout from that day, and the Soviet government’s attempts to conceal its complicity are depicted in a new Sky Original drama on Sky Atlantic.

“Above all,” says writer and executive producer Craig Mazin, “you will witness the true stories of the heroes of Chernobyl as they fought an unprecedented war against an invisible enemy, even as their own government betrayed them”.

The miniseries documents how the accident at Ukraine’s Chernobyl Nuclear Power Plant, in the then-USSR, actually resulted from a safety test gone wrong.

At 1.23am on April 26th, 1986, the plant’s Reactor 4 exploded, sending a plume of radioactive material into the air and lighting the night sky over the city of Pripyat.

Over the course of the five episodes, viewers will learn of the culture of lies that led to the disaster, and the subsequent efforts to avoid a complete nuclear meltdown.

The drama is based on both first-person testimonies from Soviet scientists, as well as reports from the International Atomic Energy Agency. To add to its authenticity, it was filmed at Ignalina, a sister plant of Chernobyl.

There were 700,000 people around the Soviet Union involved in the clean-up operation, and the huge ensemble cast in Chernobyl (with 104 speaking parts) reflects this.

Just four minutes after the explosion, as deadly smoke billowed out, firefighters arrived on the scene to fight what they were told was a roof fire. The men, including 25-year-old Vasily Ignatenko, rushed to battle the fires in the reactor building. In the process, they were exposed to huge doses of radiation.

Divers were also enlisted to help prevent an even larger blast. A further thermal explosion – large enough to destroy the site’s three remaining reactors – could have rendered much of Eastern Europe uninhabitable for potentially more than 100 years.

As efforts to contain the radiation continued, hundreds of coal miners set to work digging a tunnel underneath the reactor, to create space for a heat exchanger which would stop the nuclear fuel from penetrating ground water and spreading fatal contamination through Eastern Europe. These miners worked for a month without ventilation or adequate protection, and it’s estimated that one in four subsequently died before the age of 40.

A huge amount of contamination had spread across approximately 2,600 square kilometres, meaning hundreds of thousands of people had to be evacuated, and a mass clean-up undertaken.

Thousands of "liquidators" – civil and military personnel who were called upon to deal with the consequences of Chernobyl and are widely credited with limiting both the immediate and long-term damage from the disaster – were enlisted and sent to assist at great personal risk, including more than 3,800 men who worked to remove debris from the contaminated roof of the power plant.

While scientists worked to find out the scope of the disaster, it’s widely held that the Communist government under Mikhail Gorbachev covered up the true extent of the catastrophe, as well as downplaying its role in the accident.

The figures are striking. The official Soviet death toll from Chernobyl stands at just 31. However, some organisations put the real figure up to the hundreds of thousands, with a spike in cancer rates in Ukraine and Belarus, particularly among children, after the disaster.

The drama depicts the work of leading chemist Valery Legasov (played by Jared Harris), and the response team who strive to find out the truth, with some speaking out against the official version of events.

The events depicted in Chernobyl took place more than 30 years ago, but the drama’s message still feels pertinent today.

As writer Mazin has warned, it’s a story about what happens when politicians “dismiss scientists and ignore the truth”.

“We live in a time where people seem to be re-embracing the corrosive notion that what we want to be true is more important than what is true,” he says.

Watson adds: “It’s about ownership of truth and the nature of energy and how we control it. It feels like both those things are desperately urgent, and that the wheels of history are turning before our eyes.”

Chernobyl, then, is more than a historical drama. It’s a cautionary tale for our times.

In a role far removed from his recent appearance in the Mamma Mia! sequel, the Swedish actor Stellan Skarsgård stars as Boris Shcherbina, the Soviet deputy chairman. Immediately after the accident, Shcherbina was tasked with leading the government commission on Chernobyl. On learning details of the accident, he must choose between the truth and the government’s demands. Skarsgård says: “He’s a part of the system. But he gets a shock when he sees what it can lead to.”

Harris, son of late Limerick actor Richard, plays Valery Legasov, a leading chemist chosen to investigate the accident. Legasov, one of the first to appreciate the scope of the accident, “has to figure out how to put Pandora back in the box,” says Harris.

The English actress plays Ulana Khomyuk, a composite character who represents scientists who worked with Legasov, and who spoke out against the official depiction of events. “It takes a dark turn when [Khomyuk] starts coming across material that’s been redacted, and realises there were design faults known all along,” Watson reveals.

Killarney, Co Kerry native Buckley – currently lighting up cinema screens in the country music film Wild Rose – plays Lyudmilla, the young wife of firefighter Vasily Ignatenko. Lyudmilla is shocked by her husband’s deterioration in hospital. She is, says Buckley, “a very human way of telling the stories of the millions that were involved in dealing with the effects of the explosion”.

Quantum of Solace actor Paul Ritter plays Anatoly Dyatlov, the assistant chief engineer in charge of the control room on the night of the disaster. He makes a series of decisions which push the reactor to extremes. Dyatlov was also, according to Ritter, “a terrible workplace bully”.