Science Week: Looking to 2045 and a world full of exciting change

Science Week celebrates its 25th anniversary with hundreds of virtual events from November 8th-15th, designed to get everybody thinking about what the world will look like in 2045 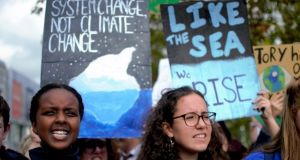 With many events forced online, some work better than others. One of those is the always fun and dynamic Science Week. Now celebrating its 25th year, the national celebration of science is back in 2020 with hundreds of virtual events for all ages taking place the week of November 8th-15th, 2020.

As always, the goal of Science Week is to provoke curiosity and explore the science behind our everyday lives. This year the theme is “Choosing our Future”, and each of the various events will attempt to make attendees consider the future we want and help them understand the role science can play in this.

Science Week might be celebrating its 25th anniversary, but instead of looking back it wants to look forward to the next quarter century – what will the world look like in 2045? Scientists of all ages spoke about their field of work and what they think it will look like in 25 years’ time.

Genomics will be commonplace

Sarah Ennis was always fascinated by how the human body works but rejected a career in medicine to dive into the world of cellular genomics and bioinformatics. “This field brings together my love for biology and my love for problem-solving,” she explains.

Ennis is currently a PhD candidate at the SFI Centre for Research Training in Genomics Data Science in NUI Galway, where her research is focused on using a technique called single cell genomics to research acute myeloid leukaemia. This is one of the rarer blood cancers – around 80 people will be diagnosed in Ireland each year – but has one of the worst survival rates, with just 25 per cent of people surviving beyond five years.

Ennis explains that the main problem with treatment of AML is drug resistance – it is believed that the microenvironment of the bone marrow might “protect” some patients from treatment. “I am trying to investigate how the different cell types in the bone marrow and the cancer cells might be communicating with each other by expressing different genes and how that might lead some patients to relapse and others to respond to treatment.” While it involves lab work, it also involves coding and the analysis of genetic data.

There will be a new generation of biologists who will have the skills to perform genomics research, whether it's at a lab bench or a laptop

It is Ennis’ belief that by 2045, genomics will be much more commonplace and accessible. “I think it's a safe bet to assume that most people will have access to their whole genome sequence - their individual source code - and that this will be used in a healthcare setting to inform the personalised prediction, diagnosis and treatment of diseases.” She also expects the divide between the experimental and computational side of biology to continue to “blur”; “there will be a new generation of biologists who will have the skills to perform genomics research, whether it's at a lab bench or a laptop.”

It all goes back to the genes

Dr Sónia Negrão, PhD, is a lecturer and assistant professor in the School of Biology and Environmental Science at University College Dublin. She says that she "fell in love with genetics" while at high school in Portugal. "When you start learning the laws of genetics, I got hooked on it and it was so fun, that was our genes could dictate what we look like."

Though she originally wanted to be a vet, she didn’t achieve a place in veterinary college. “Thank God,” she says. “Now I realise that I would never have had the guts to be a vet!"

Negrão instead studied agronomy, the branch of agricultural science that deals with the study of crops and the soils in which they grow. Her research in rice and barley breeding has brought her all over the world – she investigated environmental stress and the biodiversity of rice plants in the Philippines and worked for several years in Saudi Arabia. Her current work in UCD is focused on the genomic signatures of stress adaptation in barley, determining what makes it more resilient. “It’s like humans – some people react strongly to a stressful situation and keep fighting, and others get overwhelmed and plants are the same.”

According to Negrão, the “cool thing” about plants is their genetics; as they can’t move, they’ve had to come up with clever solutions to survive stress.

In 2045, she believes the use of new technologies will play an even bigger role in plant science, as agriculture necessarily becomes more sustainable. “We are seeing a shift towards a heightened awareness of sustainability and changes to consumer patterns. In 25 years, this will be more pronounced as our teenagers grow up and take with them the vegetarian or vegan habit they developed in their youth .” She believes that plant science research will be fundamental for sustainable food production in 2045.

Prof Derek O’Keeffe says he was always curious – as a teenager, he took apart the family’s television set to see how it worked, before putting it back together again. That anecdote is almost a metaphor for his chosen career, that of a “physicianeer” or physician engineer.

O’Keeffe first studied engineering at undergraduate level but a medical-themed project in his final year piqued his interest in the human body. A PhD in biomedical engineering followed, which allowed him to combine his two interests. Interest in his PhD work led him to Harvard University in Massachusetts as a Fulbright scholar. “My eyes were opened to the clinical world more and more – it was a great ecosystem over there, where I could see the hybrid of medicine and engineering,” he explains. He then undertook a medical degree, and eventually specialised in endocrinology, training at the renowned Mayo Clinic.

O’Keeffe’s mixture of engineering and medicine came to the fore when he worked with NASA placing a sleep experiment onboard the International Space Station. He made his way back to Ireland, however, and is currently a consultant endocrinologist at University Hospital Galway (UHG) and the Professor of Medical Device Technology at the National University of Ireland Galway. His TED Talk “Digital Doctors: The Future of Medicine” caused a stir last year, and currently has over 55,000 views on YouTube. Technology and medicine are married every day, he says, giving the examples of fitness wearables: “People are now getting insurance incentives for joining gyms or doing 10,000 steps a day. All this data around human health is at our fingertips.”

He has since pioneered a new programme whereby students can study a combination of medicine and engineering, and O’Keeffe sees hybrid programmes such as this becoming “commonplace” by 2045. “By then, clinicians will have the vocabulary of science and technology – right now we are still teaching it the same we have taught it for 200 years. It gives you the skillset to look at a new way of doing things in medicine.”

By 2045 we will know whether many of the dire predictions around climate change will have come to pass. 14-year-old Sumaya Mohammed and 16-year-old Mira Henchi, students at Cork Educate Together Secondary, freely admit they are “accidental” climate activists. Henchi explains she was always aware of climate change but didn’t know much about it. That all changed when she became involved in plans for the first “climate strike” in Cork last year. “I finally felt the urgency of the issue and I believed that I had to do something, morally I had a duty to fight for this because it was going to affect me and everyone in my lifetime and also the future generations that aren’t here yet.”

“At first I knew that it was happening, but I didn’t see the urgency,” Mohammed says. “When I got involved through school, I began to question why isn’t everyone doing something about this. I felt if I didn’t do anything about it, how could I say I love my planet?”

Both students want to take career paths that will allow them to help others, whether it is through science or human rights activism. Henchi agrees. “By 2045 if we don’t take action, there will be extreme weather events happening the whole time here in Ireland, with more droughts and flooding. This will increase homelessness and poverty and that’s what pushing me to fight for our climate.” Mohammed is optimistic, believing that climate activism can make a huge difference. “So many people care so much about this, they will do anything to make sure we are in a better place in 2045 than we are now.”

Science Week 2020 will run from November 8th to November 15th and this year marks its 25th anniversary. Want to share your views on how science can shape our future? Visit our interactive platform and join the conversation at scienceweek.ie to share your vision for the future this Science Week! #BelieveinScience