Hundreds of events will take place nationwide in November, providing a brilliant opportunity to explore the world of science and technology that surrounds us 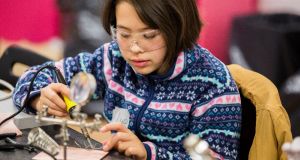 Finding the science in everyday things like public speaking or poetry might seem like a challenge but that’s exactly what experts hope to demonstrate during Science Week 2017, which takes place around the country in November.

Hundreds of events are being run countrywide, with Science Foundation Ireland (SFI) also hoping to engage the digital generation by getting them to tweet their long unanswered questions to the #StopAndAsk campaign and some of these will be answered by a scientist.

One of the most anticipated events to be held throughout the week is the ‘Richard III Discovered’ Exhibition which is coming from the University of Leicester to Galway. The event runs for three days, opening on Friday, November 24 in the O’Donoghue Centre in NUI Galway (open to students from post-primary schools), on Saturday, November 25 in Galway Shopping Centre (open to the public), and on Sunday, November 26 in the O’Donoghue Centre in NUI Galway for the Galway Science and Technology Exhibition Day (open to the public).

The discovery of King Richard III’s skeleton has been the scientific detective story of the decade. Special guest speaker Dr Turi King, professor at University of Leicester, will recount the story of the discovery of the remains, which was found during an archaeological dig under a council car park in 2012. This led to the identification through DNA of King Richard III’s skeleton.

Dean of the College of Science at NUI Galway, Donal Leech says teenagers will be fascinated by the replica remains.

“The exhibit is aimed mainly at second level students but also the general public. It tells the details of how the skeleton was discovered, identified and confirmed to be that of Richard III. I am most looking forward to what they have learned since 2012, things that might debunk myths about the physical attributes he had such as his deformed spine. The skeleton has a bit of deformity but not what they expected. Also things like the colour of his eyes and hair will be interesting.”

Leech says this discovery shows the power of the scientific method; “thinking something is there, finding it and then confirming it”.

“Kids just love to see a skeleton, given it’s no longer a part of biology class. They also like hearing the story of the find and the people behind it. It’s a personal view, how those people worked on it, being a detective/scientist, and finding the answers.”

The exhibition consists of a display panel, a 3-D replica of the skeleton of Richard III, a full suite of medieval armour, and an arrow drop to demonstrate the wounds inflicted on the Kings body at the Battle of Bosworth which led to his demise.

Science Week is a brilliant opportunity to explore the world of science and technology that surrounds us all, and is playing an increasing role in our lives

For anyone who suffers from a fear of public speaking, the Science of Confidence seminar being held in the Gaiety School of Acting in Temple Bar on November 19 from 11am to 12.30pm will help those worst affected to identify what happens, physiologically, when the fear takes hold.

Administrator of the school, John Lawless says they will look at what happens to the human body when it’s afraid, including dry mouth, shortness of breath, sweaty hands, increased oxygen intake and increased heart rate.

“We currently run a masterclass at the school called the Confidence Edge with tutor Donal Courtney.  It’s always been a way to take the training we give our actors and apply it to people who need to overcome any kind of confidence issues, whether it’s in business or as a student making presentations.”

A SFI representative will look at what causes the reaction and why certain people experience it worse than others, while the acting tutor will then apply interactive activities to help them learn how to deal with it.

“We’re not going to force anyone to do something they don’t want to do in the seminar but hopefully they’ll be able to apply some of this after the class,” Lawless says.

The beauty of nature is evident in Seamus Heaney’s poetry, but can the science be spotted so easily? That’s exactly what palaeontologist Prof Mike Stephenson, director of science and technology at the British Geological Survey and poet and physicist at TCD, Prof Iggy McGovern hope to illustrate with the Bone Vault: the poetry and palaeontology of Heaney’s bog bodies, being held in the National Museum of Ireland on November 15 from 5.30pm to 7.45pm.

Dr Fergus Mc Auliffe, education, public engagement and communications manager at ICRAG says Heaney was able to illustrate in two words what scientists might take a paragraph or more to express.

“If we think about trying to explain through science, often the descriptions used can be very exact and complicated. If we look at the poetry of Heaney, his descriptions are fantastic, you can really picture the bodies that he’s writing about or the different things you might find in a bog. It’s an excellent way of getting an insight into anything, using poetry as opposed to science.”

As an example, McAuliffe looks to Heaney’s poem Kinship.

“If we think about a bog, a couple of thousand years ago something has dropped into it, it sinks down and gets changed with the acids and passage of time and it might get found later. You could spend a paragraph describing that in a scientific paper but he describes it in two words, ‘Ruminant Ground’, something that is taken in, chewed up, changed and it comes back out,” he says.

This event will be split into two parts. “In the first hour they will go through two Heaney poems and look at what we can learn from them and what does that tell us about the science. Immediately after that we will move to the Kingship and Sacrifice exhibition, where there are four bog bodies and people from the museum will explain about the remains,” he says.

Dara O’Briain’s Scintillating Science returns this year at 8pm on Sunday, November 12 in the National Concert Hall. This year will feature live experiments, panels on Wild Weather with Evelyn Cusack and others, a section where we ask Will A Robot Steal Dara’s Job, and a panel on Our Extraordinary Bodies which will include an astronaut speaking about how the body manages in space, a sport star, among others.

As part of Science Week, SFI aims to connect people to those making new discoveries every day, the Irish scientific research community.

Dr Ruth Freeman, director of strategy and communications at SFI says; “Science Week is a brilliant opportunity to explore the world of science and technology that surrounds us all, and is playing an increasing role in our lives. Science helps us to ask and answer the questions, solve the problems and to consider what is next. This Science Week, we want as many people as possible to get involved and ask the questions that matter to them - the questions that have always made them curious.  We’re calling on everyone to take part in the #StopAndAsk conversation and to attend the events taking place in your county, or nationwide.”

To join the conversation on social media, use the hashtag #StopAndAsk to ask the question that has always puzzled you, and scientists will be responding to the best questions.