Cooking up a storm: what drives the winners of the 2016 Irish Restaurant Awards 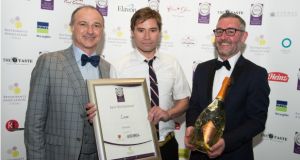 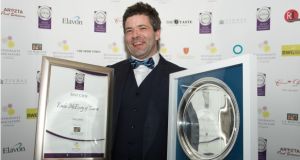 Enda McEvoy of Loam in Galway, winner of the Best Chef Award at the Irish Restaurant Awards, 2016. Photo by Paul Sherwood 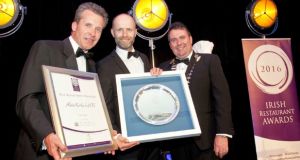 Alain Kerloc’h of Ox in Belfast, winner of the Best Restaurant Manager at the Irish Restaurant Awards, 2016. Photo by Paul Sherwood

Luna, Loam and Ox, the top three winners at this year’s Restaurants Association of Ireland awards, are easy names to remember, and according to the members of the public who nominated them, and the judges who voted for them, the food is just as memorable.

Best Chef went to Enda McEvoy of Loam in Galway, Best Restaurant Manager to Alain Kerloc’h of Ox in Belfast and the top award, Best Restaurant, went to Luna in Dublin. They were the recipients of three national awards handed out by the association at an event held in Dublin last week, and the accolades mean a great deal to the winners, who work hard to gain and keep their customers, in a sometimes unpredictable industry.

Adrian Cummins, CEO of the Restaurant Association of Ireland, said this year’s awards were the most successful yet, for a number of reasons.
“The volume of nominations by the public was up nearly 40 per cent on 2015. The standard keeps rising year on year and the academy, made up of food critics, food bloggers and experts in the food industry said it was the most difficult year to pick winners due to the standard.”

So what is it about these restaurants that make them winners?
All three agree that sourcing the best in Irish produce is fundamental, but also knowing that they are creating more than just a plate of food for their customers is vital; it’s about creating a memory, through good food, ambience and service.

Kerloc’h, who has won Best Restaurant Manager twice, says it’s a great honour to receive the award. With a growing culinary scene in Belfast and Northern Ireland in general, he’s proud that Ox has been at the heart of the food revolution there. “It has improved a lot since I came to Belfast in 2007. Every year there are new chefs and new restaurants opening and it’s amazing to see that. It’s catching up on every other city and it’s so good to be a part of that, in a city that’s in constant progress.”

When he and chef, Stephen Toman, opened Ox three years ago, he admits there were some negative comments but, on the whole, the people of Belfast were ready to embrace something new. “I always believed in the people of Northern Ireland. They travel and they talk about their wine, and they know what they’re talking about when it comes to food. Even when people were a bit negative, saying they only want fish and chips, I knew, people wanted something else.”

He says a piece of advice he was given while he worked at a three-Michelin star restaurant, Taillevent in Paris, has stood to him.
“My boss said, for people to enjoy my food, they need to feel at ease. Instead of asking people, are they enjoying their meal, I ask are they enjoying their night. It’s not about spending it with an intrusive waiter, or sommelier, it’s about them having the best night possible.”

Kerloc’h, who is from Brittany, puts his win down to a strong team and is loath to take all the credit. “I can’t do anything if the food is not good. We need to have all these ingredients for me to be a good manager. My secret, I know how to surround myself with good people.”
He met his wife in 1995 and moved back to France but they were happy to return to Belfast in 2007, where he says he feels most at home and where he sees the food scene growing in confidence.

“When I worked in Paris I saw a lot of Irish produce being used. Now we have more confidence in Ireland and we believe that we are as good, maybe better than other countries. We have great chefs, they are travelling more to learn techniques and they come back with great ideas.”

McEvoy, who owns Michelin-starred restaurant Loam in Galway, can’t put a finger on why he won Best Chef, but he seconds what Kerloc’h says about the importance of good produce and about setting the scene for a memorable evening for his guests.
“The food we do is very seasonal and all the vegetables come from one farm. We have complete control over all of the produce that comes through the door because of the close relationships we have with our suppliers. We don’t really have a lot of bells and whistles on the plate, we just work with really good produce and we don’t do a whole lot to it.”

McEvoy, who is originally from Virginia in Cavan, went to Maynooth University to study English and Sociology but it was during his time as a kitchen porter in a restaurant in Freiburg, Germany that he started to develop a love of all things culinary. He thought about coming back to Ireland to finish his degree and “get a real job” but he never did and instead travelled the world, learning different cheffing techniques. He did a three-month stint in Noma in Denmark and it was here that he picked up on its unique approach to produce and organisation and it is this that most influences him in his own kitchen.

He says he’d be lost without the Irish customer, even though food tourism is also a big part of business too. “The Irish customer has always had an eye for value and that doesn’t mean quantity. They know what value for money is now and it’s more than just what arrives on the plate. It’s about the ambience and the service, the level of excitement and the fact that you’re not going to get this anywhere else.”

Declan Maxwell, who worked as general manager in Chapter One for 16 years, now runs Luna. Given that it opened only 10 months ago, by restauranteur John Farrell, Maxwell says that winning Best Restaurant is an “unbelievable” achievement.

“The team have all worked in high-end restaurants, and we’ve all come together here. That’s what we’re putting the win down to. It’s New York, Italian style with waiters in Louis Copeland tuxes. People say the restaurant is like a set from Mad Men. If we were still able to smoke in restaurants, the men would be puffing on cigars and the women would have those long, thin cigarettes,” he jokes.
He says it’s the polished, high standard service in a fun atmosphere that is attracting the masses. “This is the creative quarter, hipster area of Dublin, so in the beginning we thought we’d have that type of crowd, but it’s a huge mix of people.”

Maxwell says he expects business to get busier after winning the award, and he’s delighted that the restaurant scene is now so vibrant in Dublin.

“A lot of young chefs are getting the opportunity to open their own places. Dublin is now becoming a food destination. People go to Paris because they want to eat in good restaurants, but food tourism is a huge thing for us. I think we’re more educated and travelled, especially younger people. My mates going back 20 odd years were going for beers, not dinner. Young people now know about wine and food and they have an interest in it. Parents take kids out when they’re younger. When I was a kid, you went out for your communion, your confirmation and that was it. If you got out on your birthday, that was really posh. Kids of 12 and 13 are now going out with their parents to restaurants like ours and that’s great.”

The full list of regional and All-Ireland winners can be found at irishrestaurantawards.com.