Redbreast: meet the Irish whiskey family that has won over the world 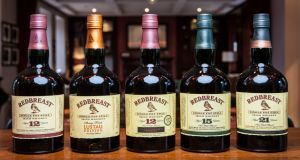 Redbreast is a champion of Irish whiskey. With five siblings, this is a family of considerable distinction that has won almost every whiskey accolade in the world. Most significantly its elite 21-year-old, which Jim Murray’s Whisky Bible has recently named for the second straight year as Irish Whiskey of the Year and, for 2018, the second-greatest whiskey in the world.

Irish Distillers’ official whiskey ambassador, Gerard Garland, thinks he knows why. He travels the length and breadth of Ireland weekly to encourage whiskey lovers and newbies to sample all five members of the Redbreast family. He likens its fruity richness, peppery spiciness and savoury satisfaction to Christmas cake and considers Redbreast to be the definitive Irish whiskey.

“When I started in the company in 2001, you were looking at Redbreast single pot still as this antique relic of a whiskey. It was a direct link to our distilling past, our history, and it nearly died out. That’s why we’re so passionate about it now,” Garland says. “We can taste that heritage going back a hundred years and more. It’s such a powerful connection to Ireland’s past.”

Sarah Finney, president of the Irish Whiskey Society, says she loves them all. “Redbreast is really close to my heart,” she says. “It was the first pot still I ever had and it remains my favourite.”

The 12-year-old Redbreast is the world’s biggest-selling single pot still Irish whiskey with retail prices around €59. It’s the bedrock for a brand on continuous sale since 1912, when the then-maker, W&A Gilbey of London, decided to name its various Dublin-made pot still whiskeys after birds.

By the 1980s Gilbey’s was struggling and pot still whiskey was deeply out of fashion. Irish Distillers bought the label in 1984 but didn’t start producing their own Redbreast until 1991.

The 12-year-old, like all Redbreast expressions is a combination of malted and unmalted barley. The drink is created by mixing together whiskey that has been aged in bourbon-infused American oak barrels and sherry-tinged Spanish oak casks. The contents are at least 12 years old but could be up to 15.

This more refined whiskey makes the balancing act more complex. The 15-year-old version was first produced in 2005 and has a retail price of around €98. It can contain whiskey aged anywhere from 15 to 19 years.

“The wood is the biggest flavour driver within it,” he says. “It has a beautiful fruity, barley backbone to it, and a black peppery spiciness on the nose. Then when you taste it, you’re getting sweetness and two fingers of pot-stilled spiciness on the tip of your tongue, followed by this buttery, creamy extra dimension in the middle of your palate.”

This is where Redbreast becomes, literally, an undiluted pleasure – not to mention blow-your-hair-back powerful.

The Cask Strength version has had no water added to reduce the overall alcohol content. This means the 12-year-old Cask Strength contains varying alcohol levels dependent on the year’s batch, hovering somewhere between 57 per cent and a staggering 60 per cent. A bottle costs around €90.

Garland says whenever he speaks to groups of whiskey aficionados, he advises them to add a little water to the Cask Strength version to make its impact less overwhelming, its flavours more accessible.

“None of them do it. It’s a waste of time telling them,” he says with a laugh. “They all drink it neat, because they want to experience the unaltered whiskey as if they were taking it straight out of the barrel. You have this intense concentration of all the flavours that make up Redbreast and they want to taste this without compromise.”

Redbreast’s newest edition aims to showcase the true sherry character of what Redbreast is known for. Redbreast Lustau,  introduced in 2016 with a €69 price tag, is designed to highlight the sherry characteristics with strong fruit and ginger undertones. These flavours reflect its development in cooperation with one of Spain’s most celebrated makers of sherry, Bodegas Lustau in Jerez.

Whereas all other Redbreast variants are produced from a combination of whiskey aged in both American and Spanish oak, the whiskey used to make Lustau is removed after nine to 12 years from these containers and placed for one year in new barrels richly seasoned with Lustau’s dry oloroso sherry. This Redbreast spends less time in older casks soaking up wood-driven flavours and more time picking up the aroma and bittersweet taste of the palomino fino grape.

“You can’t go wrong with the Lustau. In some ways it’s my favourite,” Garland says.

But everyone’s favourite seems clear: the 21-year-old Redbreast, which has proved a critical sensation since its 2012 debut. It retails at around €185. It’s produced from batches that can range from 21 to 28 years in age – and produces a range and depth of flavours and scents that Finney of the Irish Whiskey Society describes as “an absolutely amazing sensation.”

“You don’t even need to drink the 21, that’s how nice it smells. You could just sit there smelling it all day. It’s astounding,” Finney says. “The 21 to me is heaven. It’s got a nose like no other. It’s nutty but it’s also rich and dark. It’s a big, big whiskey.”