Redbreast: "I like to think that I have a small part in the story"

The archivist, the cooper and the blender discuss the history and unique taste of the most decorated single pot still Irish whiskey in the world 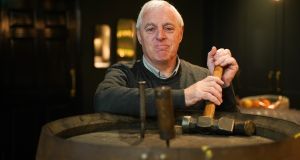 Ger Buckley, head cooper at Jameson Midleton Distillery: “My own family have been coopers for well over five generations.” Photographs: Conor Mulhern

Behind the accolades there is a rich history going back over 100 years. “The history of Redbreast is absolutely fascinating,” says Carol Quinn, archivist at Irish Distillers. “It is the coming together of two well known firms. Back to the 1880s in Dublin, Bow Street Distillery was at its height, producing roughly a million gallons of single pot still Irish whiskey every year. There were essentially two routes to market, Bow Street could sell direct, or sell through wine and spirit merchants. One such merchant was W&A Gilbey, a firm that set up in London in the 1850s and then opened branches in Dublin in the 1860s. By the 1880s they were buying in bulk from Jameson, and bottling and distributing through their own networks.”

The distinctive character of Redbreast seems to have come about as a by-product of simply Gilbey’s trying to save a little money on their invoices. “Part of the charge in buying whiskey from Bow Street Distillery was for the hire of the cask, and Gilbey’s was a wine merchant with plenty of excess sherry butts in their stores at Harcourt Street,” says Quinn. “So, Gilbey’s started to use these old sherry barrels, leaving the whiskey slumbering in them until the time came for them to be bottled. After a couple of years, they noticed that something quite unexpected happened. Part of the sherry profile was coming out in the whiskey and it was actually making - Gilbey's believed - a nicer drink, and immediately they wanted to market it.”

That took some back and forth, explains Quinn, as Jameson were very particular about what they put their name to, but they eventually recognised that the blend of flavours that was inadvertently created was something quite special. “The first time I see any mention of ‘Redbreast’ is in The Irish Times in 1912, and Gilbey's put in an ad for their 12 Year Old Redbreast Whiskey. They advertised it as Jameson's whiskey from Bow Street matured in sherry casks,” says Quinn. “And it was immediately quite exclusive, because while Jameson was producing a million gallons, only 6000 gallons were ever sold to Gilbey’s at a time, and Redbreast was only a small percentage of that.”

Redbreast continued to be produced through the following decades, gaining a rather hallowed status. “It became a bit of a cult classic. Gilbey's also had the concessions for selling altar wine,” says Quinn, “so Redbreast was known as 'the priests' tipple' because you'd see it on sideboards in parochial houses, but you wouldn't always find it in pubs.”

The whiskey became an even rarer commodity from the 1960s on, when Irish Distillers decided to stop selling in bulk to wine and spirit merchants like Gilbey’s. “Gilbey’s pleaded with them and they released a little more stock after that time, but really it was a dwindling amount,” says Quinn. “So the possession of a bottle of Redbreast in the 1970s and 1980s becomes a rare and precious thing. You’d really, really want to like somebody before you’d offer them a glass of it because you weren't going to get another bottle.”

In 1991, with the beginning of the resurgence of interest in the Irish whiskey category, Irish Distillers relaunched Redbreast. They bought back the rights to the name and it reappeared on the market after a 10 year gap with no production. But in recreating a classic whiskey, they needed to ensure everything stayed as close to the original recipe as possible, right down to the wood of the barrels.

Ger Buckley, master cooper at Jameson Midleton Distillery, intimately knows about the rise and fall and rise again of single pot still Irish whiskey. “My own family have been coopers for well over five generations, almost 200 years. In the 1950s and 1960s, all of my uncles were coopers, as well as my grandfather, and his brother. So at that stage I had two uncles working in Murphy's brewery, two in Beamish's and my Dad and another uncle in the Midleton distillery, we really had branches everywhere,” he says.

“The craft of coopering dates back over 4000 years, and in many ways it hasn’t changed that much. Manufacturing has become mechanized, especially on American barrels,” he says, “but with sherry casks like the ones used in Redbreast, it is still very hands on. The design of a sherry cask is almost identical to how it was in Roman times, and coopers still make them from start to finish.”

To repair casks used for Redbreast, Buckley uses tools handed down through the family, some of which are over a hundred years old. “Because I'm probably the last of the family to be in the tradition, I’ve inherited a lot of the tools through the generations,” he says, “and they're not sitting in a display case, they are the tools I use on a regular basis.

“For me and my family, to come through the darker days of the 1970s and 1980s when single pot still Irish whiskey was almost extinct, to see the fanfare when there's a new Redbreast expression, it is amazing,” says Buckley. “I like to think that I have a small part in the story. I am part of the team that goes to Spain to acquire the sherry casks, we import well over 5000 sherry casks a year from there. I also go to Galicia where the oak is sourced for the barrels. It is amazing to be part of, and we are very much involved in sustainability and traceability because there's a huge amount of history - both within my family, and within the Redbreast brand, that I feel is important to stay authentically connected to.”

Bringing Redbreast to new generations is a careful process for blenders too, who try to keep the tradition as close as possible to the original production of the whiskey 100 years ago. Dave McCabe started his apprenticeship as a blender in 2017 under  master distiller, Billy Leighton, after working in the visitor centre since 2010.

“A lot of the work of a blender involves innovation, but when we are working on Redbreast, it is not a brand we ever want to go too far off track with, rather it is about finding ways to maintain that distinctive character that makes it so appealing - and history dictates a lot of that,” McCabe says.

Taking the single pot still Irish whiskey, which is distilled using a mix of malted and unmalted barley, McCabe then lets the spirit age in used bourbon barrels and sherry casks to add another level of flavour.

“During its time in the barrel it develops colour from the wood, but also additional flavours. So with the American bourbon barrels you can get sweetness like vanilla, caramel, toasted wood, and even a touch of cinnamon and clove. Then the sherry casks are a bigger flavour contributor, we get a lot more dried fruit flavours, like raisins, sultanas, prune and fig and a little nuttiness - some people describe it like Christmas cake.

“We have expanded the range to 12 Year Old, 15 Year Old, and 21 Year Old versions of Redbreast. They all carry the same DNA of what defines Redbreast, but we have some variables with the age and the use of bourbon barrels to sherry barrels, and then the use of those barrels a second time because they give you a different type of flavour with each use.”

The popularity of Redbreast continues to grow internationally, suggests Carol Quinn, because of the strong connection it has to the tradition of crafting whiskey. “When Redbreast hit the market again, all of a sudden it became this shining light for single pot still Irish whiskey. There was a very warm welcome and people really embraced it. For me, with Redbreast you're absolutely drinking the most wonderful expression of years of experience, both in terms of distillation and maturation. It feels like a time machine that brings me back to that original golden age of Irish whiskey.”

To find out more, visit redbreastwhiskey.com