Not everyone is aware that the RDS was created to put ideas in action and progress Irish society, says its chief executive Michael Duffy, who is welcoming new members 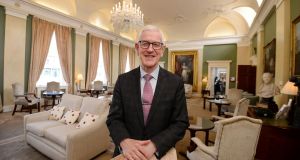 RDS chief executive, Michael Duffy: "We want members to enjoy being members, but at its heart, membership is about supporting the work of the society"

What’s the RDS to you? For many of us it’s the Horse Show, summer concerts or maybe Leinster Rugby matches. However, its position as the country’s foremost events venue is merely a clue as to its real purpose.

For nearly 300 years the unique, not-for-profit, Royal Dublin Society has had just one abiding mission. That is, to create a positive impact on the cultural and economic development of Ireland.

It was founded in 1731, at a challenging time in Ireland’s history, by members of the Dublin Philosophical Society, best known of whom today is Thomas Prior. Its full name at the time was the Dublin Society for Improving Husbandry, Manufactures and other Useful Arts.

Its founding aim was to identify and address gaps in the country’s cultural and economic development. This has seen it, over the centuries, nurture both ideas and people right across the arts, science, enterprise and agriculture.

That founding mission remains its raison d’etre today and not in any dry academic way but in the practical application of innovation. “It has always been about putting ideas into action,” says Michael Duffy, its chief executive.

Indeed, the only reason the RDS has its famous show grounds and exhibition halls at all is because, historically, exhibitions and fairs were the mass communications of their day. They were how great ideas were disseminated.

[Become a member of the RDS today. For more, see rds.ie/membership]

What a job it has done down through the centuries. It’s hard to believe now but the RDS was involved in establishing many of Ireland’s key cultural institutions.

Its centrality to Irish life simply cannot be overstated. Indeed, it spent over 100 years in Leinster House. “Today’s Dáil was our lecture theatre and many of Ireland’s cultural institutions were built around the RDS,” Duffy says.

Along the way it helped out Irish society in myriad ways. It pioneered the use of radiation in cancer treatment here, for example. “RDS Members brought radium directly from Marie Curie to work on cancer treatments here in Dublin,” he says.

In just 50 years in the 18th century it was responsible for the planting of 55 million trees. It’s a diverse and phenomenal legacy but the RDS’s mission remains the same today, and its work is still ongoing.

Among the current raft of RDS initiatives are Science Blast, a programme that promotes science and technology among primary schoolchildren. Its Craft Awards nurture emerging craftspeople. Its library and archive supports researchers. It is supporting farmers to face up to the responsibilities and challenges of climate change with a Climate Smart Agriculture scheme. It offers one of the largest annual bursaries in Europe to talented young musicians, and awards an annual Gold Medal for enterprise.

Ireland’s horse industry is also supported through a pedigree mare profiling project, while the RDS also runs a networking club for entrepreneurs.

“The RDS has always been about seeking out things that need to be done, and then doing them; about seeking out needs that aren’t being met, and then meeting them, without duplication or repetition. Above all it’s about giving something back,” says Duffy.

What’s more, membership of the RDS brings benefits not just to the country but to members personally. At its Ballsbridge HQ, it runs a range of stimulating events, seminars, concerts and social activities for members, of particular interest to the culturally curious.

Member subscriptions are then used to support a number of sectors, from the arts and science to enterprise, with the same themes underpinning all activities.

“On the one hand we try to recognise Irish exemplars, such as through our Gold Medals and through the Horse Show, which represents the best of the equestrian industry. On the other hand we also recognise and financially support emerging Irish talent,” he says.

[Become a member of the RDS today. For more, see rds.ie/membership]

Becoming a member is a terrific way of helping out. “Of course we want members to enjoy being members, but at heart, membership is about supporting the work of the society,” says Duffy.

“The RDS is a national institution. We get 1.5 million people through our doors every year as a venue and the role of events, for us, is part of our economic contribution. Opening up our 40 acres, and our 200,000 sq ft of exhibition space is worth €600 million to the economy both directly and indirectly.”

The only agenda the RDS has is to make a positive impact, culturally and economically

The RDS is completely self-funded, with income deriving entirely from its commercial activity, subscriptions and philanthropic donations.

“That allows us to run the RDS and spend €2.5 million a year on our foundation work programme, staying true to our founding values of independence, stewardship and wanting to contribute,” he says.

“The only agenda the RDS has is to make a positive impact, culturally and economically. We are not lobbying for anything, or representing any position. There is no financial gain to membership. There is nothing here but a focus on giving something back. The reasons the RDS exists today are exactly the same as they were when it was founded: contributing to the greater good, of putting ideas into action.”

A quick guide to membership

How many members does the RDS currently have? 3,500

What are the main benefits of joining? Apart from supporting the RDS mission, members have access to an exclusive dining club, hotdesking opportunities in the library, use of meeting rooms, car parking and complimentary access to the Horse Show.

There is an active social calendar too with everything from classes to lunchtime events and trips abroad. Many members also take advantage of our reciprocal clubs arrangements too, allowing them to visit and stay in clubs around the world.

Once you join we can also put new members in touch with existing ones who might have similar interests. There’s a great social element to membership.

How much does membership cost? €330 for people who live in Dublin, and €250 for those living outside of Dublin, anywhere on the island of Ireland and overseas. You also pay €50 when you join which you get back in food and beverage credit in the members’ club.

Students aged between 18 and 25 get associate membership for €85 a year. They love to use the library as a quiet space for studying for exams.

Become a member of the RDS today. For more, see rds.ie/membership