Randox’s next-day service is fast, affordable and offers a gold standard for detection of the virus at nine locations nationwide 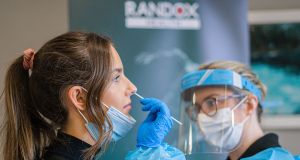 The real selling point of Randox’s service, is the rapid and reliable nature of the service – it will guarantee a next-day result. Photograph: Randox

With almost 40 years’ experience in diagnostics, Randox Laboratories was ideally positioned to become integrally involved in the fight against the Covid-19 pandemic. Its next-day, cost-effective PCR (polymerase chain reaction) test offering has soared in popularity since launch, with passengers and key workers availing of the service for essential travel.

Since the initial launch of its Covid-19 travel testing service back in November at Dublin Airport, their presence has grown significantly – there are now six testing centres dotted around Ireland in Dublin, Cork, Limerick, Galway and Sligo, as well as three in the North, including a recently opened centre at Belfast International Airport. This is due to increasing demand, as many people are still forced to travel for essential or work reasons. The company is now regularly processing over 100,000 samples every day, for both the UK’s National Testing Programme, and private testing within Ireland.

“We began to see a steady increase in numbers, and in December this was substantial,” says Paul Turnbull, global business manager with Randox.

“We realised quickly that you can’t expect everyone to come to Dublin, this has to be regionalised so we quickly set up the different centres.”

The capacity across Randox’s four purpose-built laboratories increased as the popularity of the service grew, and it is soon to open another in Co Donegal. In total, the company has created almost 900 jobs so far.

Another milestone was reached on January 23rd, 2021, when Randox surpassed a testing figure of 9 million samples, something the company is justifiably proud of.

And despite the international debate around the role for rapid “on-the-spot” antigen tests, Turnbull explains that PCR testing remains “the gold standard” for detection of the virus.

“When it comes to travel, we started to see more and more countries across Europe state that they would only accept a negative PCR result and that has remained the case, as countries only want the most sensitive technology,” he says.

“Some countries however, such as the Netherlands, require antigen testing as a secondary test before entry, and so we will soon be adding this type of testing to our offering, along with antibody testing to determine previous infection.”

The real selling point, however, is the rapid and reliable nature of the service – Randox will guarantee a next-day result. “The economies of scale we have gone through allow us to offer next day results,” says Turnbull, who adds, “For travel it has to be a quick turnaround as many countries will insist on a negative result obtained within 48 hours of travelling.”

This has become even more pertinent as the recent emergence of new variants of the virus has led to countries clamping down on inward travel.

The Randox next-day testing service is priced at €99 – some private PCR tests can cost up to twice that amount, and Turnbull says keeping the price reasonable is paramount.

“If you are traveling and you are a family of four, it could be another €700 or €800 just to go away, and the same again if you want another test when you land. Our whole focus was to establish a service that would be reasonably attractive from a cost point of view, otherwise what is the point?”

Dr Joanne Darragh, Covid-19 laboratory manager with Randox, explains that there is a “very tightly controlled process” that allows for the fast turnaround. “Our goal has always been to process tests in as quick a time as possible but also in complete adherence to quality until they have passed the whole way through the system.”

To that end, much of the process has been automated, from opening the boxes containing the swab samples, to scanning them for processing.

“The data is also recorded on a specially developed Randox app – it used to be done on paper,” says Darragh.

This means Randox can see a sample travel right through the lab from beginning to end in less than eight hours. “When you consider we are running 100,000 samples through in less than 24 hours it is incredible,” says Darragh.

Turnbull says Randox’s testing travel service has helped to support key worker travel and ultimately promote the normalisation of travel across the board. As countries move out of lockdown and vaccination becomes more widespread, travel will naturally begin to increase again, and he sees the Randox service as playing this pivotal role for the medium to long-term. “We are there for as long as it’s needed,” he confirms.

But it is not just travellers who have availed of the Randox service. One business that sought peace of mind for its workers ahead of a New Year return was Walls Construction. When it became clear the post-Christmas surge had not only happened but was on a scale greater than anyone had imagined, PR manager Ian Barrett says the company took a “proactive decision” to offer all their site-based staff a test for Covid-19 before they returned to work on January 4th.

“On January 2nd we arranged for our site-based staff to be tested for two reasons – one, because we were aware that the incidence rate had gone up and the odds were that there were going to be a few positives, and second, we also wanted to give our staff peace of mind that they and their colleagues would be Covid-free returning to work,” Barrett explains.

“We were also conscious at the time that construction was in a privileged place, in that we were allowed to remain open.”

Over 350 people were tested that day, with results back on the Sunday before the return to work the following day.

“Having looked at a number of different providers, we went with Randox because they have a national network of test centres, which was important because a large number of our staff would be from out of Dublin. The 24-hour turnaround they offered also fitted in with our narrow window of opportunity.”

Convenience was key when dealing with such a large cohort – Barrett says that the company could “pre-fund” their account with Randox, allowing employees to personally book their test at a time and location most suitable for them using voucher codes.

In the end, just a small number of positive results were returned. Barrett says the company is extremely happy with how the whole exercise went. “The timeliness and convenience of the Randox service worked so well for us. Trying to test that number of people over the Christmas holidays is not an easy thing, but Randox made it possible.”

Book a PCR travel test or PCR private test at one of Randox’s locations nationwide - booking.randox.ie