Government has a chance to move beyond status quo as it faces raft of challenges, says PwC head of tax 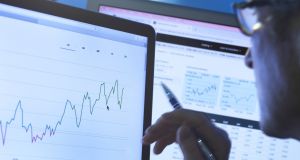 Financial analysis: the Government faces the fallout of the pandemic, a no-deal Brexit and the uncertainty of a US election as it prepares to frame Budget 2021. photograph: Getty Images

In framing Budget 2021, Minister for Finance Paschal Donohoe will not only have to contend with the fiscal and economic fallout of the Covid-19 pandemic but he will also have to be mindful of the increasingly likely prospect of a no-deal Brexit, the urgent need to address climate change, ongoing reform of international tax rules, and the prospect of further global trade turbulence depending on the outcome of the US presidential election in November.

Despite the whirlwind of challenges, PwC head of tax Susan Kilty believes there are opportunities to use tax policy to stimulate growth and tackle problems in areas such as climate change which were previously thought too difficult and expensive to address. “I don’t envy the Minister, but there is a need to use the upcoming budget to support investment to get the economy going and to use tax policy in creative ways,” she says.

Brexit will of course be among the minister’s top priorities. “All the signs indicate that there will be no-deal and WTO tariffs will apply to trade between the UK and the EU from January 1st, 2021. There will be nothing the Irish Government can do to mitigate that should it come to pass,” she says. “We have already seen the hospitality, travel and non-food retail sectors bear the brunt of the Covid-19 recession. Agriculture, manufacturing and the food retail sectors will be at the front line of the Brexit impact. It’s now about how we brace for this.”

Covid-19 has interrupted preparations for a lot of companies. “Many companies have already done a lot of work preparing for a no-deal Brexit, but they’ve been focused on Covid-19 over the past number of months, and rightly so. There is still a lot of work to be done to get ready.”

Those preparations include finding alternative markets for exports. “That takes time and resources,” Kilty notes. “The Minister should look at giving tax relief or other direct supports for spending on that. Funding should also be made available for investments in new infrastructure and technology in our ports to ensure trade flows freely following Brexit.”

Dealing with a no-deal Brexit on its own would be difficult enough for any minister for finance but doing so during the unprecedented economic dislocation caused by Covid-19 is especially challenging. “Covid-19 is impacting some sectors more than others, but the overall economic damage has been enormous with unemployment at more than 15 per cent and a likely exchequer deficit of €30 billion by year end,” she notes.

“We are still trying to understand how we can live with the virus in the longer term while balancing health, economic and societal priorities,” Kilty adds. “That said, the Government has done a lot to support business since the start of the pandemic. And Minister Donohoe has signalled that there will be no increases in income tax, USC or PRSI – that’s good for confidence.”

But there is scope for further action. “We are seeing many companies digitising their businesses and people will require new skills to work in that new environment,” she says. “The Government should start investing in those skills now by providing supports to allow people to retrain and to assist employers to provide training for their employees. This would not only help people return to work but would also improve our competitiveness as a country. The Jobs Plus initiative could be put back in place with minimal effort, as could other creative solutions to kickstart a return to growth.”

Despite a whirlwind of challenges, there are opportunities to use tax policy to stimulate growth

The impact of Covid-19 on working patterns is another issue deserving attention, Kilty believes. “They have changed irrevocably. This has been a massive unplanned experiment and most businesses have been pleasantly surprised that productivity is so high. Consideration should be given to providing tax relief for employer and employee spending on the new work arrangements. This would support the Government’s regionalisation policy at the same time as benefiting the environment by cutting back on commutes.”

This brings her to the green agenda. “Climate change is the greatest challenge facing this generation. The cost of tackling it will be phenomenal and it’s going to take a long time and a huge amount of effort. But it cannot be done without serious political will and the current Government, the greenest in our history, has committed to meet this challenge head-on.”

She welcomes the commitment to a new national domestic retrofitting scheme made in the programme for government. “That is a very positive step and will also lead to job creation in the construction and engineering sectors. There are other areas where the creative use of tax policy can further the green agenda and make Ireland an attractive location for the development of green energy and other technologies associated with the battle against climate change.” Kilty adds that it’s a blank canvas for Government to think creatively to encourage private investment including from overseas.

Building on existing strengths will be critically important for the economic recovery. “One area where there hasn’t been much commentary has been the multinational sector,” she notes. “That’s possibly because those companies haven’t required that much support during the pandemic. The multinational community played a major role in helping us out of the last crisis in terms of its contribution to job creation, export growth and so on. It will have a very significant part to play this time around as well.”

She believes the Government has done well in terms of support for the FDI community. “The Tax Strategy Group and the Corporate Strategy Roadmap is part of that. The Department of Finance and successive ministers have done a great job in continuing to give a line of sight to the multinational community in Ireland on the future direction of tax policy. There have been quite considerable changes in recent years, but the department has engaged in consultation and that has been incredibly important in giving the FDI sector confidence that Ireland remains a very stable location for investment. This is even more important at a time of such uncertainty.”

Of course, there are some things over which the Government has absolutely no control. “The result of November’s US election will set that country’s tax and trade policy for the next four years,” says Kilty. “The best defence we have against any adverse moves is a budget which returns the country to growth.”

The other imponderable is the ongoing OECD tax reform process. While this may have paused temporarily while governments were occupied with the Covid-19 response, Kilty expects it to continue with renewed vigour in the coming months.

“The key reason for rewriting the international tax rules has been the claim by countries that they are not receiving a sufficient share of tax revenues,” she explains. “Every country is suffering from increased deficits now and that will add impetus to the process. The Government needs to keep a close eye on that and, if possible, help ensure that the rush to find an agreement doesn’t result in bad law that would place an increased compliance burden on business.”

She concludes on a positive note. “The ‘fiscal space’ is shattered. We are in a new reality in which the Government can think beyond the status quo, make the most of the funding and political impetus now in place, and make a real difference to our economy and the citizens who drive it.”