It looks like the world’s leading economies are determined to claim a bigger slice of the global corporate tax pie which will lead to tricky times ahead for Ireland, according to PwC tax policy leader Peter Reilly 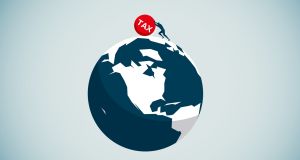 The OECD is now looking at the most fundamental revision of the basis of taxation in almost a century. Photograph: Getty Images

The OECD Base Erosion and Profit Shifting (BEPS) rules may have been what was sought by participating countries at the outset, but they haven’t delivered the anticipated results when it comes to the share-out of the tax paid by multinational corporations. As a result, the OECD is now looking at the most fundamental revision of the basis of taxation in almost a century.

“Back in 2013, the OECD came out with the BEPS action plan,” says PwC tax policy leader, Peter Reilly. “Many experts thought it was going nowhere and that the OECD would often take several years to gain consensus. But things changed when the politicians got involved.”

Countries were just emerging from a sustained period of austerity at the time and governments were asking why multinational companies were not paying more tax in their jurisdictions.

“Politics started driving the BEPS process at the OECD,” he adds. “In fairness to Pascal Saint-Amans, director of the Centre for Tax Policy and Administration at the OECD, and his team, they did come up with quite a lot within three years.”

What came out of this was the end of tax havens. “Groups, where applicable, were given a few years to move their money out of whichever sunny Caribbean island it was located and to put it in a country where they had real substance. The BEPS process was also very successful in its drive for tax transparency.”

The outcomes certainly favoured Ireland. “This all played into Ireland’s hands,” says Reilly. “We were already transparent and happy with those elements. Our tax regime is well set out in statute and we weren’t a rulings (deals) based jurisdiction. We had a low rate but a wide base. Companies with operations here already had substance in Ireland and were happy to double down and pay the 12.5 per cent Irish rate on a greater portion of their income.”

This meant that companies ended up paying more tax in Ireland, not less. Hence the quite dramatic rise in corporation tax receipts over the past three years.

“The OECD and the politicians gave themselves a pat on the back and moved on when they put the rules in place but then certain larger countries saw they were not getting any more from the tax pie, but that Ireland was,” says Reilly.

“We are in the era of results-based policy making; if you don’t like the outcome the first time, you have another go. It’s now not about companies paying their fair share, it’s about countries getting what they think should be their fair share of the global tax pie. That has led us on to what is effectively BEPS 2.0. While the digital world has driven the changes, they will impact all companies and not just highly digitalised ones. It is the biggest change in international taxation in the past 50 to 100 years. It will change the fundamental basis of taxation.”

At present companies are taxed based on the location of the functions performed, the assets used, and the risks assumed. “The digital world means companies are able to do business in a different way,” Reilly explains. “They are able to move their supply chain around and sell into major markets without having any significant presence in them. That has led to countries like France and Italy saying companies are exploiting their market without paying enough, or any, tax and they want a bigger slice.”

Fundamental change is required if the balance is to be tilted in that direction. “The OECD is asking if markets can be added to functions, assets and risks, and thereby allocate a value to the market,” says Reilly. “We already know the answer as it is a politically driven process. The big question though will be how much should be allocated to the market – the word “modest” has been used by the OECD, I’ll be really interested to see what this means.”

The other proposal under consideration is for a minimum tax on corporations. This would mean that companies would be subject to a minimum rate of tax regardless of the jurisdictions they are located in. “Germany is really in favour of it,” Reilly notes.

This is a matter of concern for Ireland. “There will be potholes in the road, but we can negotiate them,” he says. “There has been a huge increase in corporation tax receipts over the last three years. These receipts may fall as a result of a shift to a markets basis and the introduction of a minimum tax but at least it would be off a much higher base. The companies here are committed to Ireland and we are doing everything that is asked of us in terms of international tax reform by our international partners.”

The biggest worry is the minimum tax, both the rate and the base. “One of the things we have is the 12.5 per cent rate and we don’t want that eroded in any way,” he points out. “If the minimum tax is set at 15 per cent, with no deductions for R&D or other incentivised activities, that would be very bad news for Ireland.”

And events are moving fast. “The OECD is undertaking an economic analysis to see if their plans make sense and they say that will be complete this year. We will have more of an idea of where it’s going, and when, by October or November. That’s when we will see if there is political agreement. They say it will be finalised by the end of 2020, that’s an incredibly tight timeframe. It could all be a reality within the next four or five years. That’s a very significant change for companies to get their heads around in a relatively short period of time. They need to prepare themselves for that change.”

The signs from the politicians and the world’s leading economies point to these new tax rules becoming a reality within the next four years and everyone must prepare for that, but there are still issues to be dealt with and delays cannot be ruled out.