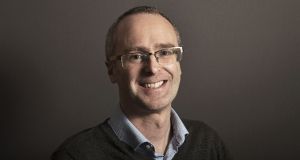 Brian Corby: "It's a very good work environment made up of a highly engaged group of people"

Brian Corby, Pfizer Ringaskiddy’s New Products Technology Laboratory leader, left the University of Limerick with a PhD in organic chemistry and a desire to work in Pfizer. The Douglas man also wanted to move back to Co Cork. The company’s Ringaskiddy plant allowed him to do both.

If he had one other item on his career wish list, it was to work with new products  – not the early stage development of them but their development into a commercially manufactured product.

It’s a side of the pharmaceutical new product pipeline that doesn’t make the headlines but is essential if patients are to get the medicines they need safely and efficiently.

GALLERY: Pfizer in pictures: a step back in time

Corby started out as a Development Chemist in the Technical Services department and then moved to Ringaskiddy’s original Organic Synthesis Plant (OSP1). It was the first active pharmaceutical ingredient manufacturing plant on the site, and opened in 1972. That experience gave him his first exposure to new products, an area for which he always “had a grá,” he says.

When Pfizer opened its New Product Technology Lab (the NPTL) which opened in 2014, he applied successfully to become its lead.

“It combined all three of the things I had experience in: new products, chemistry and operations,” he says.

Much of the NPTL’s work relates to oncology drugs. These are highly potent products, which by their nature need a high specification facility that protects both the drugs being produced and the people working in it.

Ringaskiddy had to pitch competitively within the global Pfizer network to secure the NPTL, and it was a significant achievement to win it.

The facility was retrofitted into an existing building, OSP2, and marked a major shift in production methodologies at Ringaskiddy. For example, where previously manufacturing at the plant involved chemical reactors capable of holding 20,000 litres of product, the NPTL worked with reactors of just 600 litres in size.

This reflects the increasingly bespoke nature of drugs in areas such as oncology, which use particular biological markers in patients’ tumours to better tailor treatments.

What was a team of eight technologists working in the NPTL when it opened has since grown to 12 people plus support staff. Their role is to ensure the effective technology transfer of each product from research sites to the plant, to ensure it can be produced at scale.

Corby’s team is responsible for plant readiness, the manufacturing of batches and the carrying out of the validation activities that ensure Pfizer can launch a product “and get it to patients as speedily as possible,” he says.

Ringaskiddy is, in fact, Pfizer’s default launch site for all small molecule APIs across its network globally, charged with ensuring drug production can be scaled up commercially. Prior to that the drugs it handles will only have been developed to clinical trial volumes.

“This activity was a key driver for me because I wanted to be involved at the cutting edge,” says Corby. “The first time we see a drug we are validating and launching it.”

He’s particularly proud of his team’s performance over the past five years. “We have two mantras that we work to: The first is ‘flawless execution’, which means that everything has to be perfect, if not we can delay a launch. The second is ‘never miss a launch’,” he says.

The NPTL’s strong track record of success in relation to both mantras derives from a unique model of collaboration and partnership called "Co-Development" with Pfizer's Research sites. A lot of the processes it uses are devised in partnership with other Pfizer units, as co-developments.

“We work in tandem with the other teams and building relationships is critical for us. The result is that we have developed a best in class process for technology transfer.”

The sites New Product Introduction work rate is exceptional. In the last calendar year, there were five new product “filings”, the documentation that regulatory authorities require before a product can be launched. “That is unprecedented in the industry,” he says.

Such a strong performance doesn’t come out of nowhere. He attributes it to the fact that not alone do all members of his team have third level qualifications, but those who didn't when the NTPL opened, actually secured their qualifications while working, by studying at night. That takes serious dedication.

As well as supporting coaching and development throughout the team, he also ensures it operates as flat a structure as possible, so that individual team members can enjoy high levels of autonomy.

“It’s a very good work environment made up of a highly engaged group of people with a strong can-do attitude and a clear sense of ownership. What we have at NPTL is a high performing, self-managing team,” he says, with pride.

That strong performance isn’t just an end in itself, he points out. It’s about patients. “Throughout the tech transfer and launch process our goal is to manufacture products safely, to a high quality, to allow us to get them out to patients as quickly as possible.”

“There is hardly a family in Ireland that hasn’t been touched by cancer,” says Corby.