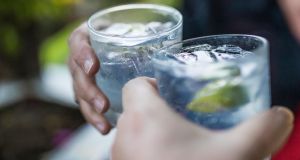 Designed to showcase Monkey 47 gin, the cocktails include a Monkey Warmer punch, a Monkey Sling take on the Singaporean classic and, the daddy of them all, a premium G&T. Photograph: iStock

Of course food gets top billing but if you’re looking to create some festive showstoppers from the drinks cabinet this Christmas, make sure to give a monkey’s.

Monkey 47 is the premium gin brand that has gained an almost cult following among those who know their gins.

In a very crowded space, it’s a gin that has cut through the crowd thanks to its quality, aroma and an intriguing back story that features a retired RAF air commander, WWII, and the botanicals of the German Black Forest.

This indie German gin came about when its creator, Alexander Stein, was contacted by a friend who had found an old gin recipe from the Black Forest. Although the Black Forest – the Schwarzwald  in German – is well known as the home of Schnapps, and indeed of almost 30,000 thousand small, independent distilleries, it’s not a region known at all for gin. At least it wasn’t.

The original recipe was developed by a retired British wing commander who moved to the Black Forest after the war, using locally sourced juniper berries and other plant extracts. Stein was smitten with the story, and the recreated recipe, and relocated from the US back to the Black Forest himself, to develop a distillery.

The result, Monkey 47, has won-over bar tenders around the world, says Andrew Dickey, an award winning former bar manager and an international cocktail making champion who now works for Irish Distillers Pernod Ricard. It acquired a stake in Monkey 47 in 2016.

“Bartenders love Monkey 47 because of Alexander Stein and the way he developed the brand - not by marketing, but by going in to meet with bartenders, one by one, and getting their feedback,” says Dickey.

That was back in 2010 and the premium dry gin’s popularity has grown thanks almost entirely to word of mouth ever since.

“Stein wanted the quality of the liquid to speak for itself,” says Dickey. It did. Today it is recognised as perhaps the outstanding premium gin, favoured both for its taste and its aroma.

What you’ll notice straight away about Monkey 47 is that it is botanically complex, made as it is from 47 different plant extracts and bottled at 47 per cent ABV, higher than almost all other gins.

As well as locally grown juniper, it includes six different type of pepper, almond, bitter orange, blackberry, cardamom, cinnamon, lemon verbena and cloves. There are lingonberries here too, as well as nutmeg, elderflower and hawthorn berries, all released in a heady scent.

The success of the original dry Monkey 47 soon gave rise to a stable mate, Monkey 47 Sloe Gin (perfect for those hot serves this festive season), a rich, peppery and fruity gin made by macerating Black Forest sloes in spirit for three months.

Both are beautifully bottled, another reason bartenders love Monkey 47 – simply having it enhances their shelves. This is because it comes in a unique, almost medicinal, brown glass bottle with a postage stamp label and a cork stopper that is sealed with a silver-style – and highly collectible – ring.

It’s a premium look and one that gives a respectful nod to its classic 1940s heritage. The beautiful bottle is also why it makes it a particularly great gift for gin connoisseurs.

Christmas is of course not just about gift giving, but about sharing. If you’re looking for elegant serve ideas for friends and family over the festive season, Andrew Dickey has developed some signature options.

Designed to showcase this spirit, they include a Monkey Warmer punch, a Monkey Sling take on the Singaporean classic and, of course, the daddy of them all – a premium G&T.

“The Monkey Warmer is a twist on mulled wine over Christmas, perfect for bitterly cold nights or great for serving over the festive period at events or family gatherings,” says Dickey.

“This is an adaptation of the classic Singapore sling, using both Monkey 47 Dry Gin and Monkey 47 Sloe Gin along with fresh ginger extract to add spice and bring the floral and citrus aromas of Monkey 47 to the forefront, including its lemongrass, lemon balm and lavender botanicals,” he says.

“The classic Monkey 47 dry gin and tonic with a grapefruit twist,” says Dickey.