Advanced Technology Buildings being constructed across Ireland have won new jobs and investment for Athlone, Sligo and Waterford; and there are more to come for Carlow, Castlebar, Dundalk, Galway, Limerick and Tralee 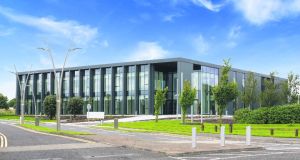 To entice world-class employers to locations across Ireland, the IDA has developed a programme of national property development that is centred on technology but focused on allowing companies the space to grow their business.

In 2015, the agency unveiled a five-year, €150 million programme to construct energy-efficient facilities in nine locations around Ireland that are either in smaller cities or major towns. The goal is to attract high-tech employment to each location.

The first three of these so-called Advance Technology Buildings have already secured hundreds of jobs for Athlone, Sligo and Waterford. Two others have recently been  completed in Tralee and Castlebar. The IDA  is breaking ground on three more technology and office sites in Dundalk, Limerick and Galway, while further down the pipeline is an office complex for Carlow and second sites for Waterford and Athlone.

Frank Conlon, head of property and regional development, says its construction of Advance Technology Buildings is essential given private developers’ prevailing reluctance to flex their battered finances beyond the confines of the M50.

“There’s total confidence in Dublin but, outside of the capital, the private sector sometimes sees development as a risk,” says Conlon, who recalls that until 2008 developers borrowed aggressively to build offices and factories without a committed tenant already in place.

We want people to see a world-class company doing well in one of these regional locations and think: that’s an opportunity, I should be building there too

“We’d happily market any offices or other facilities being constructed today outside Dublin, but private developers largely withdrew from that market in 2008 and haven’t come back. In many locations we’re the only ones building there.”

When potential foreign investors arrive in Ireland for an IDA-sponsored visit, Conlon says most typically want to be close to other high-tech peers in Dublin, where almost half of Ireland’s 200,000 IDA-sponsored jobs reside. He says Dublin’s advantageous claim over foreign direct investment reflects, in part, employers’ desire to pick a base where competitors are thriving and providing an EU-wide magnet for highly-skilled workers.

The agency’s greatest challenge, therefore, can be to ensure the visiting investor’s mind is opened to attractive alternatives elsewhere. “Our mission in life is to promote balanced development across Ireland,” Conlon says.

It’s often critical to be able to show potential investors a finished new building as their prospective factory or R&D centre. A new facility offers certainty, with the ability to move in quickly and to secure a long lease with rental prices at a fraction of the expense of Dublin.

The Advanced Technology Buildings programme typically locates the new structure in an industrial park located, ideally, in a town with an institute of technology that can deliver a steady flow of newly qualified jobseekers. That anchor client will showcase the strengths of that location and attract other FDI projects.

“We want people to see a world-class company doing well in one of these regional locations and think: that’s an opportunity, I should be building there too,” Conlon says. “Once you have the services and infrastructure established, and have a top client in place, it will become a magnet for more companies.”

The first of the IDA’s completed Advance Technology Buildings, known as ATBs, was purchased for an undisclosed sum in 2016 by Miami-based OPKO Pharma to house about 200 new workers in Waterford’s Business and Technology Park.

The building will house R&D and production of drugs focused on combating cancer and obesity.

California-based Aerie Pharmaceuticals signed a January 2017 lease agreement for the 2,650sq m ATB built in the Athlone Business and Technology Park. By next year, Aerie expects to employ more than 50 there in the production of new drugs for treating glaucoma and other eye diseases.

And Illinois-based Abbott Laboratories announced that in May it is expanding its Ireland operations at the new ATB in the Sligo Business and Technology Park. Abbott, which has operated in Ireland since 1946 and Sligo since 1974, is shifting its nutritional devices division from a much smaller facility on the other side of Sligo to the new site. The move secures more than 100 existing jobs in the town and provides space to grow amid €10 million in new investment.

“We built these buildings specifically to win those three investments by OPKO, Aerie and Abbott,” Conlon says. “And we’re similarly confident of winning a client for the ATBs in Tralee and Castlebar too, but it takes time.”