Phase two of the 25 luxury two- and three-bedroom apartments in one of the best locations in Dublin offers inspired architecture, sophisticated interiors and beautiful surroundings

Sponsored by Lisney and Hooke & MacDonald 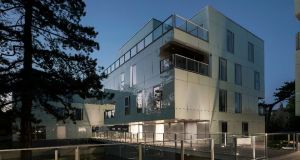 Good architecture pulls off the dual feat of both standing out and fitting in. Dunluce, an award-winning development of luxury apartments in leafy Ballsbridge, does just that.

This week marks the launch of phase two of the two- and three-bedroom apartments in Dublin’s most exclusive address.

A large part of the appeal to buyers of phase one was their location, according to joint selling agent, Ellen Bailey of Lisney.

“New builds are hard to come by in the Dublin 4 area and particularly in Ballsbridge. Buyers to date have been a mix of Irish investors looking for longterm opportunities, international buyers and downsizers from the area - the chance to live on Anglesea Road doesn’t come up very often,” she says.

The setting is equally compelling, says property consultant Carolina Lees of joint selling agent Hooke & MacDonald: “It’s a  unique location in that you are on Anglesea Road, yet tucked away off it, on a site that allows you to live centrally and yet not feel you are even in a city.”

This low rise, low density development – there are just 25 apartments and penthouses in total -  overlooks Merrion Cricket Club on one side and the playing fields and parklands of Herbert Park on the other. Despite being so close to the city, it occupies a uniquely sylvan space. Currently there are 11 apartments sold out of a total of 25 with just 11 two-bedrooms and three penthouses remaining for sale.

This was one of the first things that struck top interior designer, Arlene McIntyre of Ventura when she created Dunluce’s show apartment and penthouse. “It’s  just a beautiful place to live, you’d almost feel you were out in the countryside,” says McIntyre.

“They just have gorgeous views, and when we were working on the penthouse it was Horse Show Week at the RDS, so we had a bird’s eye view of everything there too. It was terrific to be working on such a cool architectural building too. It almost felt like stepping into another country, the development has an almost ‘Miami’ feel to it, and beautiful landscaping with a kind of Zen garden effect.”

The apartments are surrounded by lawns and connected by raised boardwalks with decking, interspersed with reflecting pools. Between its waterfall feature and the Dodder River, which bounds the property, the calming sound of water is a ubiquitous presence and can be enjoyed from the outdoor terraces that are a feature of each apartment.

Dunluce has won best housing at the 2017 Royal Institute of Architects in Ireland (RIAI) Awards. “What is special about the development is that it is in this hidden site in Ballsbridge with amazing views relative to the Dodder River, Herbert Park, the open space of Merrion Cricket Ground and the Dublin mountains to the south,” says architect, Derek Tynan of DTA Architects, the multi award-winning practice that designed it.

“The result is that despite the density of the area, it feels very open, and we were working with that relationship to these elements in the design of it. Our strategy was to reduce the general sense of mass and build something that seems to be permeable in the space, that has a sense of pavilions in the landscape.”

Apart from a form that looks almost like dissolving sugar cubes, what is most immediately striking about the buildings is that each is swathed in a shimmering green vitreous cladding that both adds to its bucolic setting and reflects it. Depending on the time of day and the weather, the surrounding trees and clouds are clearly imprinted on it, giving it an almost transparent quality.

“It has a series of ornamental ponds too, so that as you move across the boardwalk from one building to the other, that transparency and those views open up - you never really feel enclosed within it as you walk across,” says Tynan.

That sense of space carries through to the most important part – the interiors. Dunluce has just two apartments per floor and each is L shaped, wrapped around a central lobby. “This allows them to be dual aspect, and because each has large, floor to ceiling windows, and the rooms have extra high ceilings, a sense of space runs through them. And of course, all that glazing gives incredible brightness,” says Tynan.

Despite all the glazing, the apartments are highly energy efficient, achieving an A3 BER. “That’s of huge interest to buyers and an amazing achievement, at just two away from the highest BER rating, making the units incredibly energy efficient,” says Ellen Bailey.

Dunluce is accessed via electronic gates, controlled by video intercom, and so feels totally secure, another part of its appeal for buyers, she says. But for most, it’s the generous size of the apartments that clinch the deal.

“All of the apartments at Dunluce have higher than standard ceilings and full height glazing. All feature private terraces too, the two-bedroomed apartments have them off the sitting room, while the penthouse features three – off two bedrooms and a sitting room. The penthouses are particularly spacious, taking up the entire top floor of each block,” she says.

Interiors are sophisticated, with high gloss lacquered floors, Velstone work surfaces and Villeroy & Boch ceramics. And each apartment gets additional storage space in the basement too.

Prices for a two-bedroom apartment at Dunluce start at Euro 775,000, with penthouses from Euro 1.7m.

For more information on phase two of Dunluce, see dunluced4.com, or contact Lisney on 01 638 2700 or dunluce@lisney.com or Hooke and MacDonald on 01 631 8402 or sales@hookemacdonald.ie.