King of the mountains: the Range Rover Velar on a voyage through Norway

We took to the fjords and mountains of Norway to put the Range Rover Velar, Land Rover’s brand new SUV, to the test 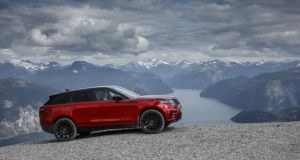 The streets of the Norwegian town of Alesund are empty as we take Land Rover’s new SUV, the Range Rover Velar, on to the road for the first time. Rain sweeps in over the islands on which the town was built - and then rebuilt in an Art Nouveau style in 1904 after being mostly destroyed by fire. Bolthole to the Kaisers, the scenic old port of the town lies on an archipelago jutting out into the ocean and guarding the dramatic Geirangerfjord. The deep blue waters of this incredible fjord are surrounded by mountains and waterfalls and form a fantastic starting point for this, the ultimate test drive.

Over 200km of driving lies ahead, taking us through some of Scandinavia’s most rugged landscape but we’re doing it in comfort. The car’s interior is built for luxury, with twin rotary dials giving the faint air of a speedboat. The dashboard is sleek at first glance, with two user-friendly 10-inch touchscreens. A map detailing our programmed navigation is on the upper screen, and we flick back and forth through its features, including media, suspension options and air conditioning. There is also a ‘head-up’ display, projecting your speed – and the current speed limit - unobtrusively to the bottom of the windscreen in front.

The Satnav directs us to Tresfjord, along the Brusdalsvatnet, a 9km long lake that dominates the view. At times, the misty quiet – with a small herd of cows blocking the road - makes it seem like Ireland, until the clouds part and snowcapped peaks loom into view down the valley. At Tresfjord we go off-road on gravel roads and through a deserted mountain pass. It’s like the surface of the moon, pockmarked with homesteads roofed with moss.

The mountains rearing up over us to the right are almost 4,000 feet – higher than Carauntoohill. There’s still some sharp turning required but the Velar keeps its grip magnificently. We’re warned that there are some deep potholes in the second part of our descent to sea level, but beyond one or two quick-steers, it all seems fairly effortless. In terms of terrain, this is the easy part. The descent to sea level at Dyrkom is gradual, along a glacial valley.

At our next stop, a huge breathtaking fjord opens up to our right, before we cut inside through forests to the village of Liabygda. Here, we board the ferry for Stranda, 20 cars packed tightly on an open-air ferry across the Storfjorden, aiming for the fabled Alpepasse. It rains heavily on the boat, so the half an hour is spent either safely in the sanctuary of the Velar, or trying to make out what part of the fjord we’re in. The rain dies down on the western shore. It’s here, on a ski slope near Stranda, that the car will really be tested. And, above us, behind a slowly opening curtain of cloud, the mountain looms.

The car’s sound system picks up my iPhone. Seemingly in sync with its surroundings it’s playing Father John Misty singing about a magic mountain. Another SUV drives ahead, struggling up the slope. We line up in a convoy, and put the car into gravel/sand/snow mode. Another touch of a button raises the car fully off the road, to avoid the many protruding rocks on the incredibly uneven terrain ahead in preparation for ascending the ski slope.

The various ‘terrain response’ systems in the Velar enable the driver to optimise the vehicle’s engine, gearbox, centre differential and chassis systems to match the demands of the route, by selecting one of four driving modes (including automatic). On slippery surfaces such as these rocks, the torque is also balanced between the front and rear wheels to maximise traction. Where only the front wheels have traction, the car moves up to 100 per cent of the engine torque to the front wheels for optimum grip.

Which is just as well, as the path ahead to the summit is like a corkscrew. Here, the Velar’s Hill Start Assist, which ensures the car never rolls backwards on an upward slope, comes into its own. Cloud hugs the slopes, and the cable cars seem to clip the road on the lower reaches. About 1km up, a man in a parachute materialises over a ridge. This is not your normal driving terrain.

Initially I take it slow on the ascent, keeping an eye on the dashboard, which shows live footage from cameras pointing from the registration plate and the wing mirrors. They combine to create a seamless montage of rock, stone, gravel and potholes on the dash.

Gradually, we accelerate. Some of the hairpin-bends are ludicrously steep, but the Velar sails through. After a rest 3,500 feet up at the skiers’ favourite, the Pavilion Roalden, we switch cars into a V6 diesel, with 300 bhp.

Suddenly we discover that descending a mountain can be trickier than going up. We activate the Velar’s ‘hill descent control’ (HDC), which maintains a constant speed, and automatically applies braking separately to each wheel. The speed variable is controlled via two buttons on the steering wheel. Looking down from the precipice, I’m not too keen on taking my foot off the brake initially, but after a few minutes I let the car take over, which it does brilliantly.

The Velar is designed to go through water up to 650mm in depth while leaving its occupants bone dry. At the foot of the mountain is a fast-flowing river, a perfect testing ground for this semi-amphibious SUV. We sweep through smoothly. Having brought us down the mountain with everything but the steering taken care of, I’d trust the car to drive me over to Greenland at this stage.

Instead, with patchy clouds hanging like smoke over the surrounding hills, we drive on a smooth gravel forest path past the Nysaetervatnet lake, and take another ferry across the Magerholm, sun shining on the snowcapped mountains, before halting at Langevag harbour, across the bay from our starting point in Alesund.

It’s brought us through forest thickets, over plateaus, through running rivers, and up treacherous Nordic Alps, but it’s time say goodbye to the Velar, king of the Norwegian mountains.